za50 shakes some of the time

I've done some searching on the forums and using Google and have come up with some useful information, but I thought I'd throw this out there to see what you all think.

The issue is that from a dead-stop, if I open up the throttle slowly my entire bike shakes quite violently as it revs up (a riding buddy has said it's visibly noticeable). Once it shifts to second gear, all is well. However, if I throttle up a bit harder (open up to about 40% throttle quickly) from a dead-stop, the bike doesn't shake at all.

When the bike is actively shaking, I'll let off the throttle completely and open it back up again. About 75% of the time, the bike will shake again while still in 1st gear (it will always shake if I open the clutch slowly at this point). Occasionally, it will rev up without shaking and shift smoothly to 2nd gear. Either way, once the bike shifts into 2nd gear, all is well.

I recently had a pair of new clutches installed (many thanks to Chris Paz and Hot Rod Todd for that) and I'm afraid this behavior is causing the clutches to wear out. The pair I have in there now replaced a previous set which had shredded the clutch lining. It's notable that the previous set of clutches also did this same behavior, so I'd like to assume that this could have been the reason why... or at the least a contributing factor. Also of note, the clutch has been flipped so the 2nd gear engages later.

What do you all think?

Pic of the bike: 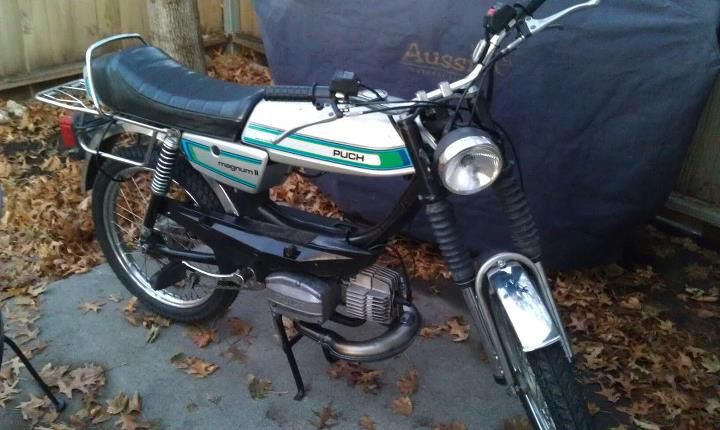 Pic of the clutches (pre-install): 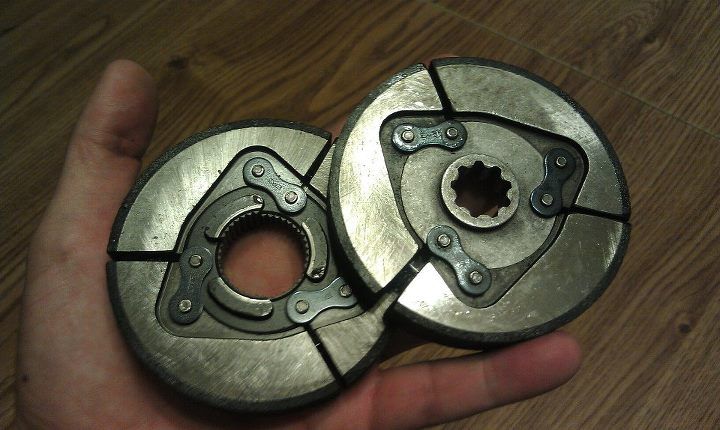 Check out those shift pucks. They can be a source of the problem. They have most likely fully disintegrated over the years.

Good idea. I haven't checked out the pucks since I've been running the new clutches. Todd (who did the installation) mentioned that the pucks appear to be in good shape. I know that the pucks had been replaced just prior to me buying the bike back in Nov '11, although I couldn't tell you which pucks were used. Of course, this doesn't guarantee that the pucks are still in good shape... worth a look, for sure.

That being said, does it seem less likely to be the pucks if the shaking issue occurs during the revving up while engaged in 1st gear rather than while shifting? In other words, the shifting itself seems to be smooth.

You'll know if your pucks are gone. TRUST ME. If they were replaced that recently I wouldn't worry about the pucks.

It's just second wobbling before it engages. It's either the splines from the clutch to the second speed drive plate/starter clutch or it's the links in the clutch - either one.

I have money on the links... the center aluminum pieces will actually wear through. From my experience - this is aggravated with a flipped second gear (still totally worth it though). Try pulling the pads away from the hub and moving your links - I bet you have a lot of play.

This happens to first sometimes too - check both. Really likely on super torqy setups like that.

From my experience, I didn't have any luck with bearing retainer or any form of loctite. After several hundo miles it was always loose again.

You might try shimming it, but I don't like that either because the first and second clutches spin independent of each other until second engages.

I believe what you are referring to is the procedure listed on page 74 of the service manual.

Does that sound right?

> I have money on the links... the center aluminum

> pieces will actually wear through. From my

> experience - this is aggravated with a flipped

> second gear (still totally worth it though). Try

> pulling the pads away from the hub and moving your

Interesting... I wasn't aware that could be an issue. I'll have to take a close look at those and see if I do have a lot of play there. Since this has been happening on 2 different sets of clutches, I'm a little inclined to suspect the spline... but I am pretty inexperienced with the za50, so my inclinations only go so far. I'm not entirely opposed to flipping the clutch back to standard to avoid any extra wear-and-tear... but I prefer having it flipped, of course.

Nope. Not that shimming. If you look at how the clutches ride - the clutches do not affect the shimming on the tranny cover (what p.74 references). The stopping point for shimming of the cover is the flange on the brass bushing that the clutch bell butts up against.

Some people have mentioned adding a spacer between the first and second clutch - because they have designed float room in them. I don't like this idea because they spin independent of each other while first is engaged.

It very well could be the links - check them on both - if it is - don't worry about it and just ride it.

If it's the splines, I'd try marring them and pressing them back on. It's an old trick for worn down shafts that you're mounting bearings on. If you have and ID of a bearing that is supposed to be a pressed fit and it's loose, take a center punch and dimple it to make it a pressed fit again.

I've never tried that with the splines though - I usually just flip the clutches back and put them in one of my slower motors. (edited)

It helps for smooth running for my stuff but if it's suppose move around maybe.

Loctiting the clutch to the plate just means the plate and clutch will move together.

One other possibility is that the brass bushing on the second speed drive plate/starter clutch thing is worn out - but I really don't think that's the problem. It's usually the clutch linkages or the splines from my experience.