Everyone I heard who has had them gets rid of them....

I thought Nick had some and it gave him about an extra 4mph?

> Everyone I heard who has had them gets rid of

Not a good trade off for the loss in torque unless youre going really build a beast of an engine.

I wonder if hobbits are geared the tallest at full variation compared to other variated mopeds. Derbi folks??? (edited)

Hello everyone ! im from norway so i will try my best to explain the problem.

I just got my malossi racing gears, (yes they have started making them agian) And i used the guide on this forum to install it, but i got this problem, when the gearbox is going to "change" to the last gear ( the new gear) it just jumps in free and i cant do shit until det speed gets lower, so i can just ride on the first gear, can anyone tell me whats wrong, i really need to fix it

Ill try em out for myself. Maybe it will fit my build.

In any case, does anybody want to clone them for when they Mysteriously become 'discontinued' and go into another many year drought ? (edited)

they have tons! no reason to clone them

They have been gone for a while - I sure hope they have tons.

Lets get a Hebo derbi vario instead of the tjt and try that too ;P

then lets get a LC head for the hobbit and and and..... 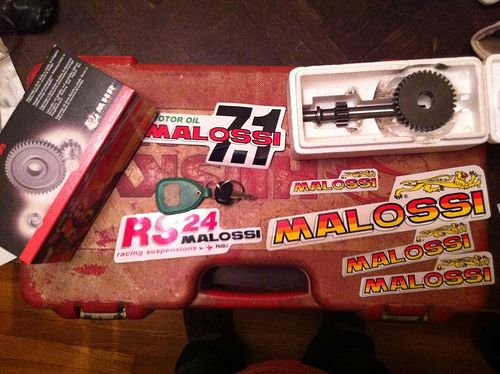 I got a set of gears also. Couldn't pass it up since I always expected to pay around $80 if I wanted to import em. More than I wanted to spend and they might not do anything ?

I just know I should get my butt over and install them right away !

Will they disappear from the shelves again or are they now not considered extinct?

Why.. please god someone tell me why Honda used freaking phillips screws every where.

looks like treats got a Malossi run… tshirts … helmets..all sorts of goodies.

I am also interested in any performance gains. previous threads basically said they throw your tuning right out the window, so it will be hard to A/B them against anything.

I am debating on these for my current build, if I don't use them now I am gonna have to hope the go extinct and increase exponentially in value.

or just build a true ripper.

Yep Will. Hey earlier today I installed my crank seal ;P I sanded that down with rough, normal, and fine emory cloth, i spent about 15-20min on it and I feel I got it so it wouldn;t catch the seal. Im good d00d.

Final drive is easy. Washers go on the ends of any shafts or gears that spin. Gasket can be made by hand!!!!

Nothing to fret my friend!

Bearings and seals are somewhat costly! But not a deal killer to the needy

The thread you have on the hpi makes me go crazy - thats like tier 1 hobbit stuff. if it decreases your temp why is jbot throwing fans on his hobbit instead of waiting a few months and saving up his pocket change?! Sillys.

Lol, you're calling me silly?

You're king of the silly. But the fan does work well....don't go knocking my mods...ya crank scratcher. Ha!

:P Your fan mod is awesome, I'd do it if I had it exactly setup like yours. But Its a little bit more electrical rigging than I know how to make work effectively.

Ill snap it eventually and then you can call me the

as far as air cooled hobbits go mine is no slouch and I know how to tune a TJT well at this point, with with the malossi gears I needed more power to be able to utilize them. Basically go h2o if you're using them. That's just my opinion.

JBOT, I was thinking the other day about your rear pulley mod. I might be able to utilize the malossi gears more with your pulley mod and some more TJT tuning, since the pulley keeps the revs up the longer gears would be cool. Then again I don't care enough to get those gears again and re tune my shit. lol

Oh and btw JBOT, I'll be sending you my pulleys again after the SWOOPS rally. lol It's been revving high though, so it is set up pretty well.

I know we have like 3 different threads going right now..

I took my new build out for run today… and was using the Mopagen yellow progressive springs in the rear pulley, was hitting about 40 before even starting to variate, still had plenty of power even as I hit a slight RPM drop.

I think this build can take it.

Off to go strip out a bunch of phillips head screws.

it says 13/35 is the malossi tooth count but what's the stock tooth count?

Why haven't heard about this build before? Links n pics?

Just know someone did some racy magic to it.

I remember way back in the day debating Tommy about these gears. He, along with Peter and a few others hated on them.

I have a bike with an OG set in them. It's still fast, but I wouldn't really recommend them for anything but a big time baller build. If you are running a proma don't bother. If you are doing street riding, don't bother... It's not worth it.

It's as simple as a regear. stock is 11/35 and malossi gears are 13/35. You take longer to produce high RPMs- which hobbits have a hard time doing anyway. They run low compression and are variated so getting those all important power producing RPMs up is a challenge.

Think of it this way... When building a french 50 race bike most guys gear with as large of a rear sprocket as they can. Because they want to be able to spin the shit out of the engine to make lots of power. Same with a clutch pulley. Spin the engine up high to get the best launch you can.

Just as a FYI The engine setup I use them on has an Odd old skool underbored (46mm of bore rather than 47.6) Athena, a TJT with derbi plate, CDI, stuffed crank, assloads of porting, MM Destroyer, Camino rear pulley- Malossi Intake. Top speed? Who knows? Real fast.

In coming days it'll be back out with even more ambitious result.

Finally put my set in and ran around town. Interesting to note, the stock gears are slanted, these are straight cut. I should have taken pictures, it was a big oily mess.

I have no idea if they are better or worse, to much traffic for a speed run.

From my first impressions, I don't hate them. If they slow me down, good, I have gotten far to many speeding tickets recently.

Any one else get some of these new school one mounted up? kozanatos?

:P I have them sitting still, on the list to do this winter and get ready for next season.

Ill take a picture of them next to stock.

Totally blew a ring on some speed runs today. I don't have the rpm's for these bad boys. Top speed was about 55. it was about 58 with stock gears and the whole time it was a bit strained.

Couldn't fully variate which was interesting, and wrapping my head around the relationship to speed, gearing and the like is new ground for my variated past.

I can say where I had the power, they seemed really responsive. I am gonna make them work. Setting a speed target of 65, so if I do go on that diet I can hit 70 this summer.

Time for that Athena kit sitting on the shelf fatty.

Sorry to hear that Will! Did you notice increased accelleration? I wonder if you need lighter or heavier weights

I did. I felt like I could have gone with some slightly heavier weights as variation was happening wayyyyy to late. Not sure if I would have stayed In the pipe. Don't think I had the power for all that.

We'll see. I'll report back next week after I get a new kit on it.