Does anyone still have the packaging that their V Force reeds for the Gila intake came in? I'm curious as to what the manufacturer's part number is.

they're for a snow mobile

According to Treats they work for KTM65.

According to this ebay description the part number is V351b..

I'm thinking Jake is right. The part number looks to be right in the URL.

> they're for a snow mobile

They are for a KTM dirt bike. :P 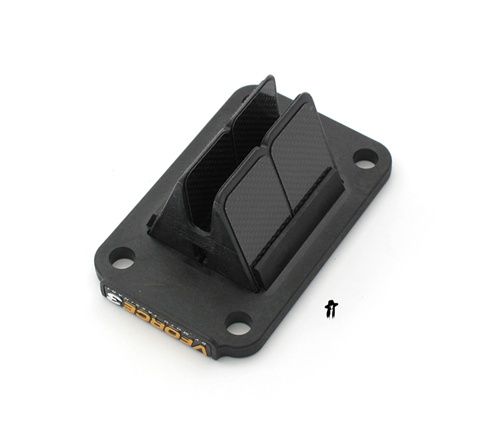 What rob said. I think a dirtbike to roadbike conversion is next on my list of things to do.

yeah, banshee reeds are the shit. and for $20

the bolt pattern does not look the same to me?

Since when does anything worth the performance ever "bolt up"

$20 for a cage with some modification (oh, and they're already stuffed and uber-aerodynamic)

oh, and here's some measurements if you wanted to look into other options.

ring. v1L coversion kits can use these banshee reed cage. just have to get a 30 pack and go at it :) send me a email i'll email a pic over

> What rob said. I think a dirtbike to roadbike

> conversion is next on my list of things to do.

Tommy, I'd like to hear more about where to get these Banshee reeds.

Not really a dirt to street conversion, but here's a Derbi Senda I built up recently (sold already). 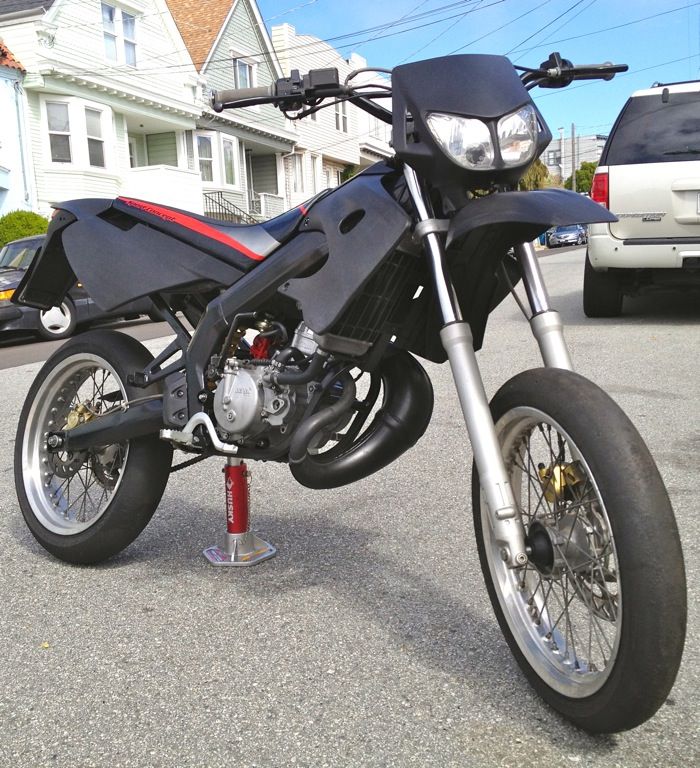 You have to watch ebay for them. I've seen a couple of those boyesen RAD reed blocks for dirt cheap, $10-20. There's some interesting sites (search Boyesen RAD reed valve) and they sell for like $60 brand new. I would probably recommend chopping off the intake hose clamp mount, and in stead running a different intake for a gila. Now that I've researched them a little more, I'm liking the stuffed design for my gila a little more. two (four) big pedals and shaped flow, and it looks like the bolt holes are only a few millimeters off.

EDIT: Looks like that ebay auction is a deal. I've been looking at the other blocks and the lowest I've seen is about the same as the Vforce. bummer -_-

I guess some of the other sites (provide barely any information) are just selling the reeds for $60. looks like more ebay lurking is the way to go.

And I know it's not mopeds... but a lot of people in the snowmobile industry recommend the Boyesens over the Vforces. (edited)

Do they say why the boyesens are better than the vforce reeds?

i did a lot of vforce vs rad valve research too.

They run cvt snowmobiles that rev crazy high and go 130 mph. The stuffed design (at least as I understand it) causes better air flow, or faster air speeds into the case. I haven't really had the skrill to throw around on Reed cages to test this though. I do, however, know that in Bell, he states that tapered stuffers that match to the intake and carb are significant rev/power increases. This appears to be the major design difference between the two. Vforces are not contoured or stuffed to match intakes/carbs, the boyesen rage cage and rad valves are.

When i bought my gila vforce reeds they came with a stuffer.. 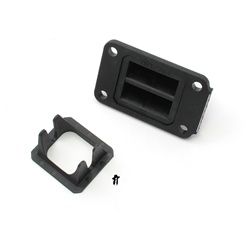 Is this contoured? Idk im just guessing off common knowledge. 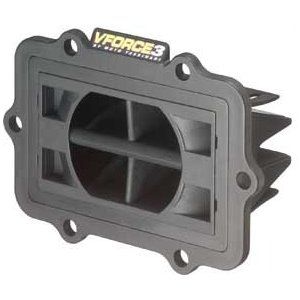 banshee stuff is made 1000 times better. Well maybe make a dat per kit plate.. or just take it to some that can tig and do some crazy magic. (edited)

my kx65 VForce came stuffed. it's a removable insert

I've always been able to blow through reeds and find a resonant frequency, but i cant get these VFORCE to make a note for the life of me. starting to think they're designed not to resonate. that would explain smoother power. 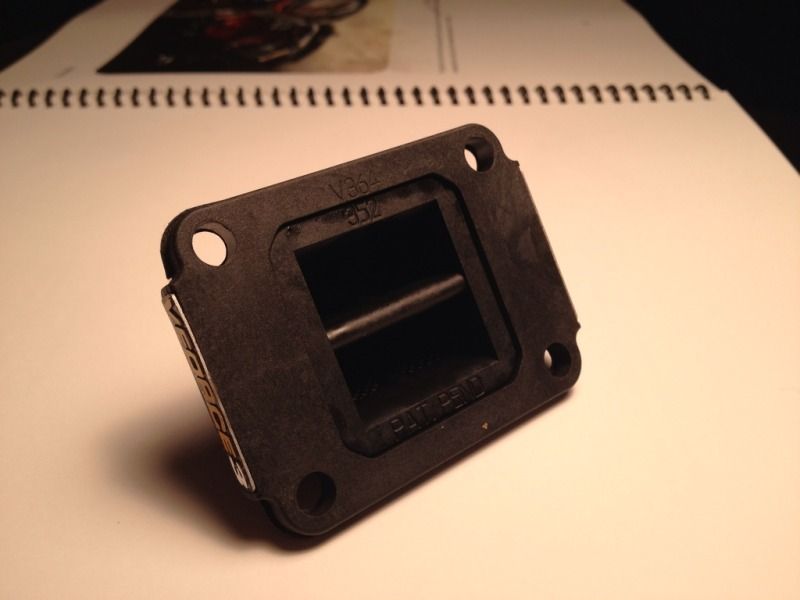 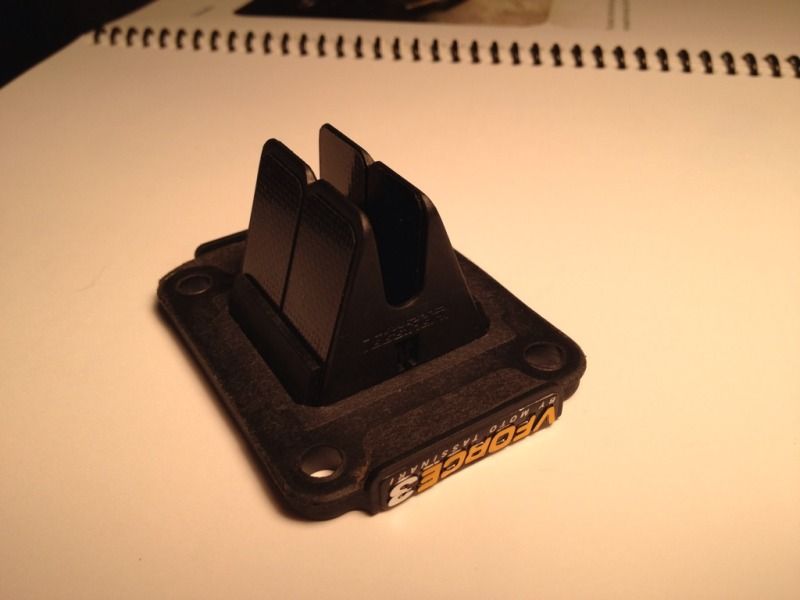 I know 2 large petals will flow better than the 4 at higher rpms.

i've never seen the Vforces with a stuffer. They look a lot better with it. I'll have to test some RAD cage banshee reeds on a gila and let you guys know what I find out. It's going to be a while though, have a bunch of other shit to do/buy first. (edited)

i got my v force off ebay used for $35. i'm really glad thats all that i payed. on my derbi with the lomat i saw no noticeable power gain. i suppose there was a slight, almost unmeasurable, amount of responsiveness gained. But imo it definitely wasn't worth $135. My previous reed cage was the doppler er2 with the carbon reeds and stuffer.

from all of my research the rad valves for the smaller bikes are just carbon dual stage reeds bolted to a pretty block. almost every dirt bike person seems to prefer the boyesens, and from what I have read the v forces are only a noticeable gain on certain bikes. according to boyesen the rad valves are designed specifically for each bike (flow direction/angles), not the case with v forces just a generic reed pattern with the different bolt patterns.

From looking at the diagrams for the Banshee reeds they seem to be too square fit in the more rectangular Gila reed port. Has anyone tried this mod and achieved success?

Tommy--as per your desire to run a dirtish type bike on the street; the Derbi Senda Super Motos are rather nice bikes. I've been riding a Derbi around for many years as my daily rider (although it's the GPR version). The Derbi bikes are quite dependable, fun, handle well, and you can usually find one for a reasonable amount of money too.

Up above in my previous post I linked the wrong bike. :P For some reason I linked a KTM, and I should have linked the Kawi. Here's an image of the Kawi engine for which the V-force reeds are made: 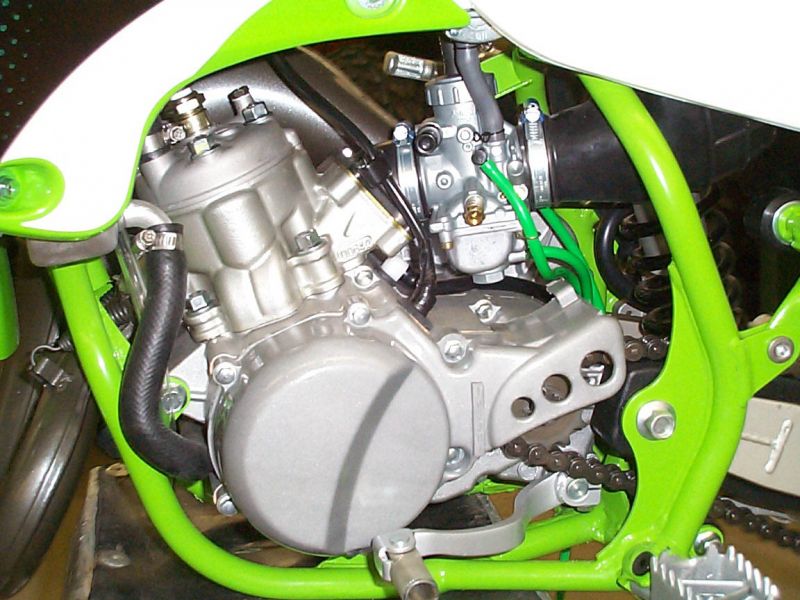 I know first hand how fast those kx65 bikes are from having them at the track with us. I want a cylinder like that on my bike.

> Up above in my previous post I linked the wrong

> should have linked the Kawi.

No rob, they're for a KTM 65 according to my research in one of the early posts:

” According to Treats they work for KTM65.

According to this ebay description the part number is V351b..”