Hey I have the stock silver cylinder on my E50 and i was going to have a machine shop mill the head down so the gasket surfaces were flush with the fins, someone told me they had done this with their black high-torque cylinder and gotten more torque out of it and i was hoping to do the same with mine but i was wondering if anyone else has done this with this head and cylinder and if its worth it?

alright thanks, mainly i wanted to know if there were any differences between the black and silver heads that would make this work only on one and not the other.

They'll both work. The difference is in the squish band. Basically, the black head (hi-torque) has a wider ring around the outside of the head (parallel to the piston crown). The silver head (lo-torque) has more volume.

The less volume that the head has, the more compression you will have. If you squish the same amount of gas into two different sized vessels, the smaller one will have more pressure. You just have to be careful how much you mill off the head. You don't want the piston to hit the head, and you don't want your compression to be high enough that you get detonation.

This picture might give you an idea what I'm talking about:

You can measure your squish by bending a piece of rosin core solder. Bend it in the shape shown in the next pic and place it on your piston. Install the head and turn the engine over. Make sure the spark plug is unhooked. 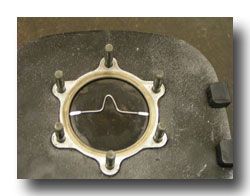 Measure the flattened part of the solder to determine your squish clearance. This can be safely brought down to 0.6-0.8mm

That should give you more torque. It might also make your engine run slightly hotter which isn't too big of a deal on a stock bike. It starts turning into a problem when you have a highly tuned engine that is already running on the hot side of things.

So yea, go for it. If it gets messed up, stock cylinders are cheap.

Oh, and I don't run any of my bikes with head gaskets. As long as your parts are flat, they should seal without a problem. I usually use a little gasket sealant to make sure everything is nice and closed up. That should give you a little torque too.

If you take too much off the head, throw a head gasket in there. No big deal.

There's even more to it and I could keep rambling, but I have a feeling that that's enough to get you started.

WOW! THANKS! Thats really easy to understand and great advice! I wasn't sure how to measure that gap to be sure i didn't hit the piston, originally i was going to use dental wax or something, never thought to use solder although im concerned it might get caught in one of the ports if i kick start it, will it work if i just turn it over once or twice by hand with a wrech on the flywheel?

Also I've always wondered what the squish-band was thanks for the graphic!

also i am currently not running a gasket between the head and the cylinder but you mentioned you could put some kind f sealer in there? i thought you werent supposed to do that on heads? (edited)

Don't kick it over. Just turn the flywheel by hand. You don't want to make a full revolution. Just bring it to top dead center and past once. If you have to crank on it with a wrench, your solder was too thick to begin with.

You can use Indian Head gasket shellac compound by Permatex or you can use Copper Coat gasket compound by K&W. I'm sure others will work too. Just make sure that whatever you're using can hold up to heat and gasoline.

ok s i guess my last question is what is the minimum clearance i have to maintain so i dont mill too much off? I saw you mentioned the .6-.8mm on the squish band. is that it?

That's a minimal clearance. You may have to adjust your squish to be larger depending on the compression you have. Do you have any idea what kind of compression you have right now? I wouldn't be too worried about how much you mill off if you maintain the correct clearance at the edge of the piston crown. If you get knocking from having too high compression, you can always add a head gasket to raise the head up a little bit more and increase the head volume.

i had a compression tester that didnt stick but the needle flew up to 94 at its peek and i have no leaks and just hit 950miles on the new rings on the piston after a whole rebuild so thats what it is no losses. this thing is insanely slow off the line and everyone i know can tell you that with the tweaks i have made it should be doing better but the compression is lousy. my friend recomended milling the head flat but has only ever used the high torque heads and he runs around 130-140psi

I mill to my desired compression, which is 180 for me. Mill a little, test with compression gauge, mill some more, test again until happy. Just don't do too much at first.

If you are going to pursue this it would be nice to have a gauge that works. If you have a gauge designed for this it may not hold pressure because you need a new tire shrader valve in it.

yeah i put a new valve in it but it was still working funky so im going to buy a new one. as for the milling, considering im going to have to pay a shop to do this for me i want to get it done once without continuing to test it, thats why im trying to get an acurate measure as to how much i want him to shave off of it.

Gots to use a gauge without a hose

i tried the sand paper thing, i had a piece of glass from an old scanner and taped some wetsanding 800 grit paper to it and it was going slowly but my concern was insuring i was keeping it flat with every pass, it has harder than i expected even with such a fine paper.

Try 150 grit to get it down. a piece of granite at the depot is 6 bucks