Anyone running scooter a head on a honda or derbi?

I was taking apart the top end of a zuma that exploded, when I got a load of the head on it. I was like damn, thats gotta give better compression than a spree head. Its like, there are three concentric circles inside, almost like a double squish or something. We have already established that hondas, at least hobbits and expresses, have the same bolt pattern and bore/stroke as the newer minarelli horizontal style scooters. My second express build, express II, is ready for a new head, and I think this is it. Check it. 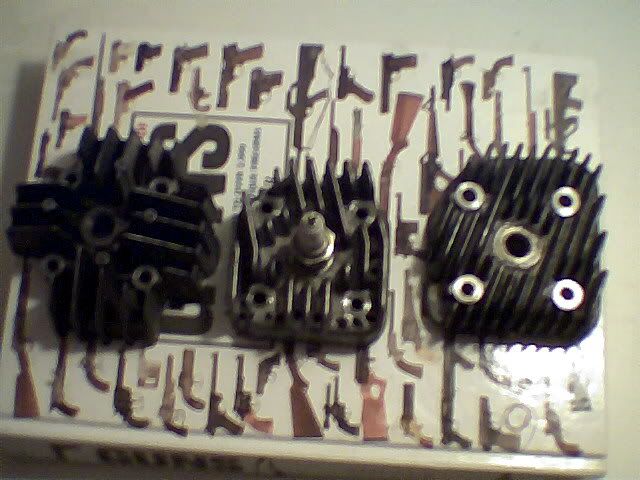 My, and most peoples, major quarrel with the spree head is its lack of cooling fins. I have no prob running them on stock expresses, but kitted ones I wouldn't. If you look, the zuma head, on the left, has thinner and taller and longer cooling fins than the spree head in the middle. 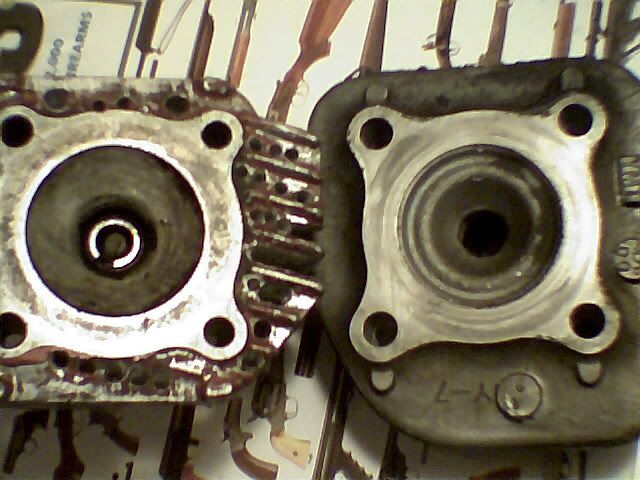 Here you can sort of see what I mean as far as three rings inside the dome. Never seen a head like it. Anyway, its going on express II tamary, and we will see what kind of compression/performance gain I see. I feel like the cooling fin area is about equal to the stock head, but the air can't get through to the cylinders fins as easily. We shall see what happens.

looks about the same volume... but deeper, that might be the carbon though. i have a spree head on my express right now, i think im gonna switch back, it gets hot as shit, especially with a kit. same bolt pattern?

Yeah, the pictures suck and its a hard subject to get pictured right, but it seems like there is a lot less volume to the zuma dome. I will slap it on in the am after a compression test and see what the story is before and after on my harbor frieght 8 dollar compression tester.

sorry if this is a double post... internet is sucking right now.

you can measure the volume by shoving a plug in the head, filling it with water to the face, then comparing with the spree head. for exact results you could use a graduated cylinder... but a comparison is fine.