Everybody runs tomos kits on puch's, but I don't see TOO TOO many posts on going the other way.

Let me just say that, wow, The polini ports are so massive its practically too large for the stock A35 tomos cases!!! I had to run two base gaskets, an A35 gasket & A polini gasket in order to attempt to make it to seal. We'll see how it turns out once i carb clean it after an hour or two of run in time.

If you want to do 4 petal ~70cc on a tomos i highly reccomend doing a puch kit over a tomos kit. The angle that the tomos kits are put at once 70cc diameter comes into play and once the malossi/polini 4 petal comes into play ends up putting the inlet for the intake directly in line with the fuel tank/frame. this is pretty much the suck, and impossible to work with. When I put the Malossi 4 petal on my Alukit, I had to lower the engine in order to make it clear. Theres' a thread on it by me, search for it and see the dramz.

With the 4 petal polini + 64cc polini kit i was set up by the getgo for awesome. Once i cleared the fins with a little bit of dremel work, the intake will clear the tomos but just barely. I checked for clearance on both my dropped engine blue bike with custom mounting points for the engine as well as the white bike with stock mounting points.

Also the larger engine cylinder studs of the tomos fit the diameter of the puch holes on the cylinder wonderfully. there's no play that way. impressive.

So then you come up to exhaust. oh the drama, what will we do.

Well as it turns out, the A55 exhaust is the one to attempt to use when doing the polini kit. It's so almost perfect, it just hangs a little bit low. With one cut and weld, for about 20 bucks at any shop, you can get perfection. What you want to do is cut the head pipe 80% of the way through, bend the pipe up so taht it fits the bracket, and then carefully unbolt it so that it's exactly the way you want. from there, rock and roll, you're ready for awesome.

I rode up and down the street for about 10 minutes for my initial breakin on the polini. impressions? It's pretty quiet, but has nice response. I'm trying to be nice to it, and hopefully it will last.

I am a big supporter of pictures with posts but unfortunately my cameraphone (5 megapixel autofocus with flash) was stolen so you'll have to give me a day or two to grab my backup camera and/or get a new phone.

dusty ran this setup on his pinto, it is fassssttt

I can't wait to race this thing.

Ok so I basically broke it in on the ride yesterday.

Time for pics and what not. 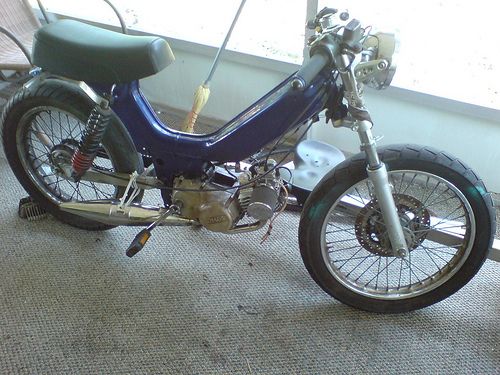 you've all seen it beforee

a view of the intake and what not 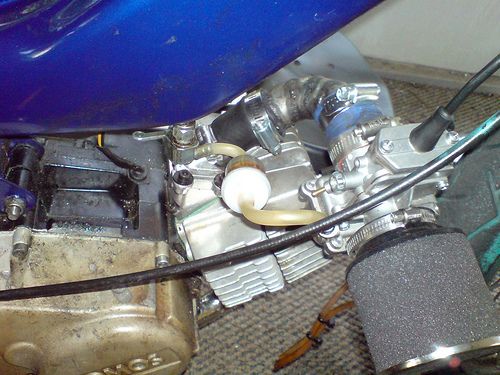 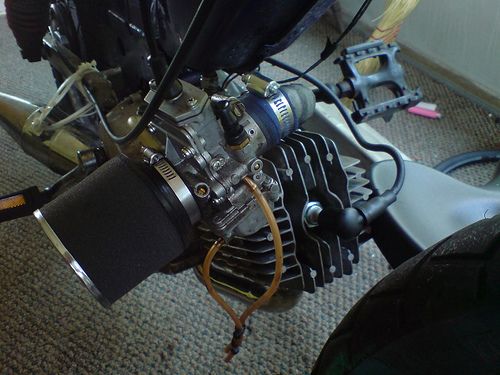 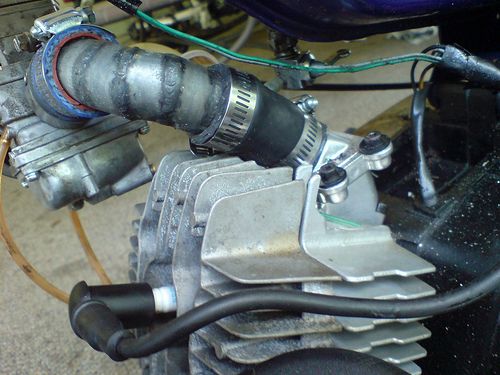 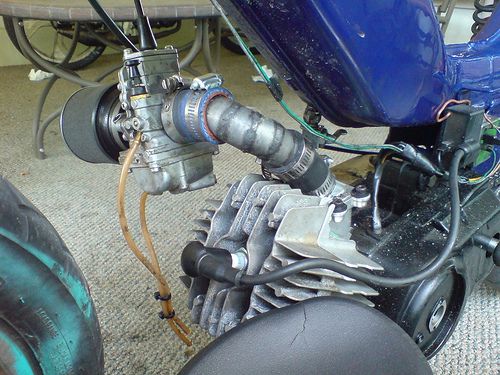 for the exhaust situation 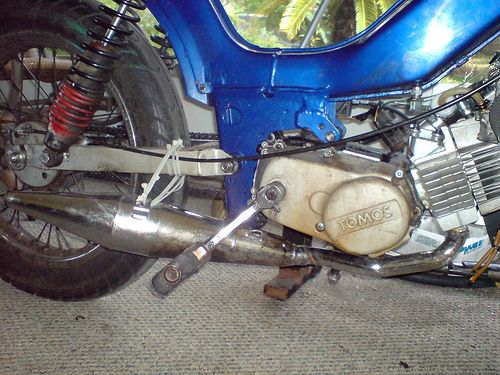 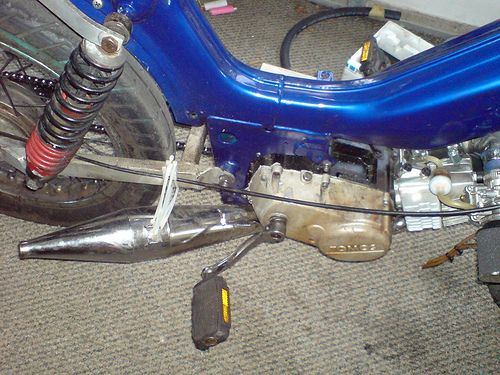 and this is how you work on mopeds in florida when you want to beat the heat, haha 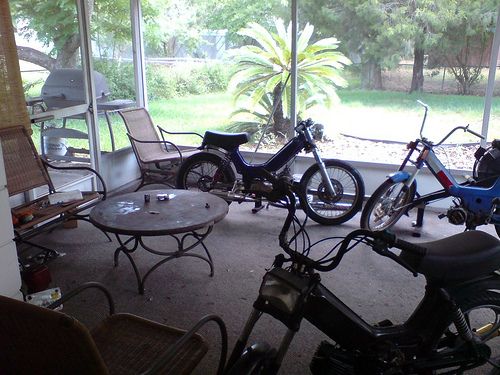 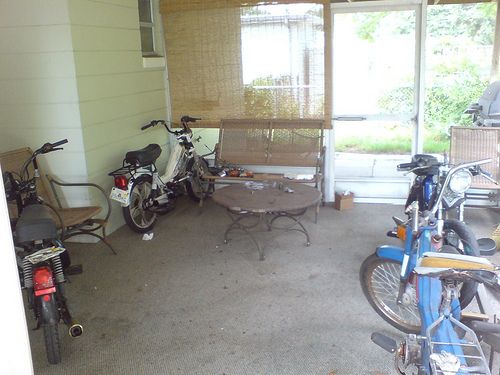 here are the settings on the engine

not really matched cases, the A35 case doesn't really have enough material to match it completely, but my transfers were opened up significantly for the alukit.

rock and roll. more to come. 27 sprocket, here i come.

that looks like the perfect moped shop for the summer.

Def a top end ped. I like the way it sounds and runs. With the 27t you will probably get at least 2-4mph more out of it. uhhhh polini

I would add metal to the cases but then i've got to mill it all back down, bla bla bla, that's a ton of work for a ped that already does 50. i blasted to starbucks and back on it this morning and I had no problem weaving in and out of traffic on hillsborough. we'll see how it behaves with the 27.

HAHA i was looking at my 26 today and the thing was looking small. i compared it to the 27 and holy crap the teeth were completely chewed and ruined!! I just put the 27 on, will take a buzz around the block. Since I repeated 53mph, if i achieve the same rpm i should be able to make it a 55 bike. results coming soon.

is there enough material to match the boost ports? You should definately at least match those.

when i tear it apart i'll take pics

yea matt I agree you should gain some power doing the boost ports at least.

I should but i don't really have the material for it. maybe that's what that A55 case will do. Later, later, later. it's the fastest ped in tampa right now so until jewish or chin or somebody beats me up top i don't see a need to push it harder.

as soon as they beat me then i'll look into doing the boost ports :)

You got us on top speed no doubt, I hope to do at least 53mph when I do the 20t rear. I am on stock reeds and have not ported one thing but no thanks on that stuff for now. lols. And Matt a month ago you straight up said you didn't care about being the fastest because you ride everyday and you need it to be reliable, you totally like being the fastest when you are the fastest. Took a few kits but you ride out pretty good now. Can't wait to see what the 27t front speed test is.

Yeah, and then i got two peds so i could ride one to school and save another for dominating the universe

I'll finish tuning the carb again Matt we will see who has the top end.

hey matt, so with some time, how are you liking this setup? i got bored and antsy and found an extra polini laying around today and decided to start fabricating. any updates? I'll be posting results tomorrow and this weekend as well (polini cup cuperteens yeeaahhhH!).

i Wish i could get bored and find a Polini just laying around! geez

So how is the Puch Polini working on the Tomos a35???

The intake is made, just have to re-angle the exhaust today, and bolt it all up. should rip though!

I can hardly wait for the results to come in.. I bet your stoked! Yea take pics of the intake setup.. What pipe and car are you running? Any mods to your clutches?

the second gear clutch spring has been shortened so the bike shifts later, intake was custom made with an exhaust header and a square washer. carb is a 19mm phbg. pipe is a modded estoril. 27/20 gearing. pics will come real soon.

mattology, how are you liking your setup?

here is my intake, ugly welds I know. 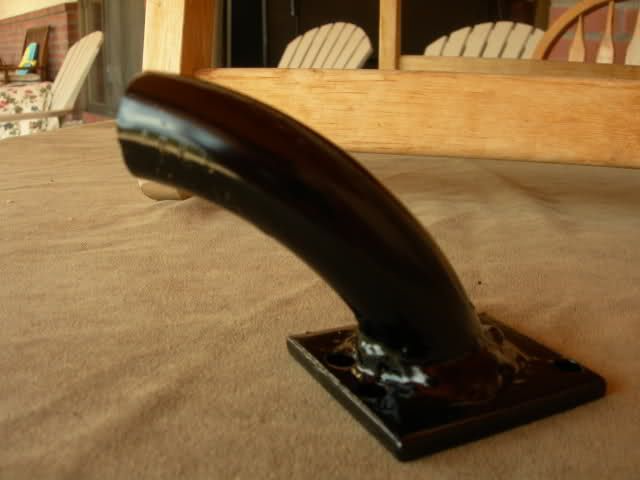 So since you fucked the polini up, that going on the gila rich boy?

The Gilardoni will be here with the case bored A55 pretty soon. I have custom clutches coming from mcmaster for that as well. We're taking a bunch of weight off of the 2nd gear clutch to hopefully be well on the monster pipe in first by the time second engages. by monster pipe i mean motomatic destroyer.

The polini has both studs ripped and broken off in it for the exhaust. i've got to take it to a machine shop, have it removed, drilled and tapped for m8x1.25 I think we're doing that to the gilardoni as well. i'm sick of this M6 bullshit. I'm also probably going to clone the motomatic in carbon fiber and make it a slip fit connect to cut down on the weight and vibration. last but not least, since i bought a tig welder this week, i'll be doing all the fabrication in house. brackets, supports, everything, and oh yeah, a kickstand.

The polini + hacked tec-niggas blasted like no tomorrow up top. there was really no comparison to my old alukit setup. Average traffic speed on hillsborough avenue is 50mph and I have no problem riding in the fast lane. well, that is until the exhaust flies off, your rear tire runs it over, and it launches you a couple feet in the air into oncoming traffic.

If you put M8s in for exhaust studs you may want to use alan head bolts to get clearance with the pipe that hex nuts wouldn't provide. K-Star makes studs that are 8 on one end and six on the other. I made some of these myself but had a lathe to use

another option are those extra long nuts that are narrow and cylindrical at the mating surface, but then have a hex head at the top, once they are clear of whatever you're trying to stay away from. either way i'll have it figured out!