Ok so for the last few hours at 77 we have been trying to figure out what if any are the advantage and disadvantage of a single swinging pulley cvt (peugeot/motobecane) vs a dual fixed pulley cvt (derbi, honda, vespa, modern scoots).

The obvious is that the swinging pulley systems require alot more complexity in making a motor swing and pipes swing etc. over the dual fixed system that only requires the extra bit of hardware on the back (counter clutch)

The single swinging system does all it gearing change in the single variator, and the swinging only take up belt slack while the dual system also takes up the belt slack both pulleys are effecting the gearing. 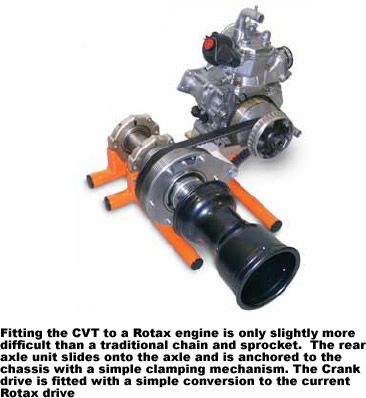 What if both are increased? will the motor need to make more power to variate? Mechanical engineers help!

They both have advantages and disadvantages.

Pivot type are nice because they are very simple to work on, spring rate, spring preload, or dampening is very easy to adjust, you can run counterclutches just like the fixed setup. The bad parts are the pivoting itself. It makes it harder to place all the parts, mount exhaust and carbs, and the float level on the carb changes with the pivot. To have a wider gear change ratio you have to make the front a larger diameter and it makes the clearances an issue with stock setups (think 110mm plate from Bidalot crashing into the driven pulley)

The advantages of the dual fixed are that they take up less space for the same gear ratio change, do not require so many moving engine parts, are usually torque sensing on the final drive (so when you are under hard acceleration it keeps it in a lower gear for longer, that's why the rear pulley turns as it slides in and out, [double side note: that's why the ball ramp plate on a stock moby has the ramps not directed toward the center but slightly off to the side, it was the same idea]) These setups become a lot hotter for some reason and on all modern scooters and even Derbis are forced fan cooled. It's more difficult to regear most dual fixed types because you have to change the final drives in the rear hub, and you usually only have a 1 choice (derbi is the obvious example along with other chain drive cvt).

As far as actual power deliver and efficiency they are both going to have the same issues. Plate clamping pressure, spring rates, roller weights, belt slippage and curvature of the belt (how tight of a curve it goes around) all affect how efficient the belt system is. Higher power requires higher plate clamping pressure to keep from slipping and higher gear ratio changes require wider and stiffer belts, which are harder to bend. I've read a lot about trying to make them more efficient from a modern standpoint but not much of that really applies to mopeds. And it all ends up as a give and take. But to answer your question, I do not know if there is much of a difference between the two as far as power deliver go, but as simple designs go, everything leans toward the dual fixed side.

So um, what exactly are the disadvantages of dual fixed again, besides harder to regear?

Seems like there are way more disadvantages to swinging type setups.

Not too much really, you can't make a dampened spring tension system for the dual fixed pullies but everyone seems to be fine without it. I have seen servo controlled cvt's that's not weight controlled and has some fun options too.

good feedback. I guess there arn't any real major disadvantages besides the moving bit to the single pulley swinging system if your bike comes equipped with it. like a moby.

I want to build a rear counterclutch pulley for my moby but also wonder if its worth the effort at all.

is a greater amount of variation actually any better? or will I just need more power to even use it.

Well more variation differential would allow for more advanced port timing and higher RPM achievable cause the wide variation would create a lower low resulting in higher rpm at low speed. Bigger deal on a 50 with its lower torque but a 70 would benefit in added rippability

Another disadvantage to the dual fixed is the transmission, and lack of chosing your gearing. As opposed to just changing a sprocket.

I would take a T-shirt as well if someone makes one...

Crackstar Breaks it all down

When measuring pulley ratios you measure at the strip near the surface of the belt, well I didn&#8217;t feel like cutting my last belt to look for this strip so I just measured from the out side(which will throw these ratios off a little bit but not too much.)

The Swinging Engine systems are in constant reduction, they never pass 1:1.

But some of them still have gears, I'll bet this is where a constant reduction ratio can be found to make up for the over drive.

So crack open a gear box and let us know what the ratio is.....

I like pugeot and mobys but with a clutch pulley.

like that they are about the same. because the rear part is just a clutch and bell (huge).

its sooo easy to change out wieghts and springs and adjust clutch.

You don't have a regearing problem on Derbis, its not really inherent to dual variation its just the way most scooters are designed.

There is also this:

I got my first variated moped a few days ago, so I'm not going to weigh in on swinging/fixed, but I will point out that I dislike belts.

Standard belts seem like a cop-out ("hmm - let's see, I need to get _most_ of this power from here to there"), and belts on variators just seem like a necessary evil.

This doesn't apply to '77, but everyone else - think about how greasy and dirty your mechanical things get, and then remember that any grease or dirt on your belt makes it perform worse. Hang on slippy.

So, I'm wondering about the chain-driven, continuously variable transmission from Fallbrook (Nuvinci). It's sort of a manually-variated clutch that uses fluid as it's power transmission (like a sprag). Not complicated at all...

Does anyone know its real efficiency rating, though? Just because a chain drives the input side doesn't mean that it avoids all of the slippiness associated with belts.

This is worth considering because the current versions available (at around 300 dollars a hub) are rated up to five horsepower, and could just be bolted onto a moped. So, if you're talking ideal moped variators for people with buckets of money...

Well, there are hundreds of types of CVT type drive trains that have been used for over a hundred years, this happens to be one of the simplest and most reliable, while also being cheap to produce. The Nuvinci is a pretty complex design that relies on special fluid inside to make it work correctly on pure rolling friction and cannot handle a lot of power, and it's extremely expensive right now, although it is pretty neat.

"The Swinging Engine systems are in constant reduction, they never pass 1:1.

But some of them still have gears, I&#8217;ll bet this is where a constant reduction ratio can be found to make up for the over drive."

can someone please expand on this statement more^^^ I'm sry I haven't quite grasped the concept of the single swinging 1:1 and the dual fixed 3:1 thing. in respect to performance. sure the dual system has a greater ratio but that means u need more power to fully use it no?

I assumed the dual system would be easier to make overdrive in a more compact space but one could overdrive the single system as well from stock by making it swing further and have larger cheeks. I'm more curious as to whether the dual system or the single system provided better performance, or better acceleration, and if so where, off the grid? midrage, more top end?

What I meant was with a moby or pug type set up even with ahuge over drive pulley the ratio of the crank rotation to the pulley rotation never exceed a 1:1 ratio.

But if you have a scooter type setup with two opening and closing pulley halves, while its in low range its like its 3:1 reduction of the crank to the output pulley. when both belts are evenly spaced and both sets of pulley halves are evenly spaced you are at 1:1 When the crank pulley is fully closed and the belt in the higest postion and the rear pully is fully open and the belt in the lowest postion the ratio would be over driven 1:3

One thing I've noticed the guys in europe doing is putting a larger cheek variator on the front of the mobies and pugs and then gearing the rear sprocket down, so the final ratio is the same but you have a better low end gear, more blasting and same top speed!

Sorry meant to type larger rear sprockets, which is gearing down but you get the idea.

yeah i guess the 2nd part of the q is how does this all effect gearing on a chain driven system like a derbi or a moby.

If I over drive the variator and gear down the back I should get the best of both worlds? top and bottom.

o and t shirts will be made

Sweet, I want a shirt!

I love this thread!

It just appears that the dual fixed has a higher ratio, but no. The Hobbit is massively down geared through the transmission. Just spin the rear pulley, on one, one full revolution, and see how far the rear wheel spins. It won't be far.

Elliot, I think you have it mixed up. if you overdrive the variantor, you would need an even bigger rear sprocket to get the best of both world. its just like a puch, smaller in the front bigger in the rear, with your variator and pulley. so if say you were running a smaller pulley for some reason you would need a giant sprocket to make up for it.

Unless by gear down, you dont mean sprocket size, but actually gear ratio. A taller variator would give more top, therefore you would want a huge rear spriocket.

Ahhh, the best of both worlds....I am trying to figure out a bigger rear pulley so I can keep my low, and then get the hobbit gears and gain some top. It might just make some more power. My bike will top out at 63-65 every time on the street, but I can seem to get there in enough time on the track. I was averaging about 57 going into the bank. Maybe I just need lighter weights now that i think about it.....I just threw in the heaviest and went to town. hmmmm.

i want somthing variated. hopeing for a PA50II