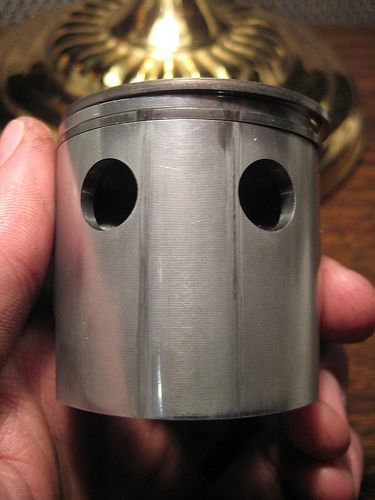 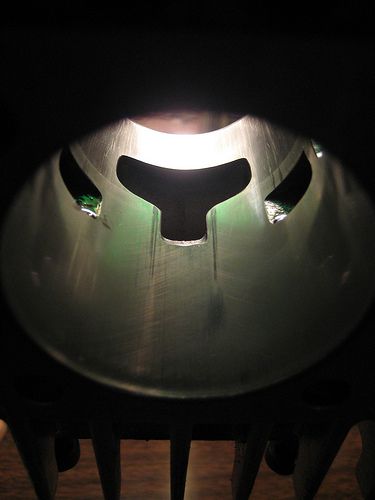 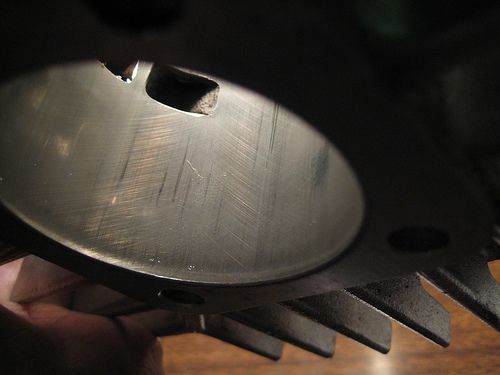 looks fine. why not run 32:1 though. maybe cut a beefier base gasket.

Just sell it to me, and maybe i can do something with it.

i think your main jet is too small

and your idle jet is too big

what pipe are you running?

maybe i'm being paranoid about the scuffing but the scratches on the piston and cylinder around the intake bug me.

hmm..i bored the case out with a dremel to get the cylinder to fit. maybe i left some high spots and when the motor heats up it gets tight against the piston skirt causing things to bind up a little bit?

as far as my main being too small, i think that tiny little malossi filter is pretty restrictive. trust me if i upjet it sounds like its slobbering all over itself.

i have the lots of restriction too,i run the malossi filter and my dmp had added restriction because my stinger is twisted and choked down

with the 50 idle jet mine would slobber too

my gila runs nice and cool .last time i inspected my bore it was smooth and shiny, even after running lean

i dunno, i trust shays ability to jet. i think the jetting is right where it should be for break in.

since you have the kit off, chamfer the ports. other than that those scuffs don't really mean much. probably the rings just smoothing out to the cylinder walls. probably won't happen much more. they wouldn't affect compression yet so no worries. i've seen piston/cylinders with waaaaaaaaaaaaaaaaaaaaaaaaaaaaay worse scores, grooves and marks run great with reallly high compression. i think you've just got a case of the $$$kit$$$ paranoia. i would still premix richer though, but thats just my personal bias.

In my opinion I think that looks soft seizeish... Have you checked for air leaks after it's hot around your intake? 35 idle jet sounds crazy low... It might be worth a shot to drop the idle down and jet higher, but i dunno about 35...

How many miles/hours on it?

if it's broken in, I'd say that is nothing. Doesn't look that bad.

when is seized my v1 it looked just like that.

it might have right around 100 miles on it, maybe a tad more...not too much.

the idle jet wouldnt affect it at wot, would it? i was under the impression that it was only up to maybe like 1/2 throttle? i'm going to order some and i'll grab some in the 40s and just adjust the mixture from there.

while its off, i'll chamfer the ports, replace all the gaskets and make sure everything is sealed good and clean up the sleeve on the case to make sure nothing's rubbin'.

no it wont affect wot

but i had the same problem with fouling plugs because of the #50 so i keept working down to 48 to 45 to 40 when i hit #35 bam! i have lowend now ,i can do burnouts and no more fouled pugs.

how did you seize?

looks fine gilas seems like they like to look all scuffy put a rear window in the piston helps everything out. You can find pictures of my gilardoni Treat-ments out there...

What if you just clearance the piston a bit right where it is scuffing. Perhaps the intake in that area is expanding more and the corners are scuffing the piston.

yeah, bengry i think thats what i'm going to do.

oh, and when i seized it on the exhaust side it was because the needle was too lean.

have you experimented with the needle shapes?

i had similar problems with polini but got a thinner needle at wot and the problem went away.

chamfering sounds like a good idea, since the skid mark are symmetric and line up with the port edges.

cylinder looks ok, but if i were you i'd replace the piston or the ring at least.

How the hell do you bore an engine with a dremel.

Just take a grinding bit and hope you get it cylindrical?

he bored the case mouth, not the cylinder, it does not have to be perfect.

Clearance the piston? i wouldn't recommend that as you might get piston slap and or destroy your cylinder anymore. don't forget about side forces of the piston on the cylinder. if you take off any material even a couple thousands of an inch especially on the intake or exhaust side of the piston which is where you get those forces there is a good possibility you will just aggrivate the problem and your cylinder will become out of round. check your oil seals. air leaks from your oil seals commonly cause scoring or scuffing on the exhaust side of the piston. if you had a bad oil seal combined with the increased crankcase pressure of the kit that would explain why you seized in the first place.

no, i'm just going to smooth out those ports, particularly those spots on the intake. i'm not going to go cutting away at the piston. also, the motor was just rebuilt and the seals are new so i'm positive those arent leaking. when i seized the first time it was because i was running lean at mid throttle because the needle was set wrong.