I'm pissed. I just spent way too much time trying to make my custom intake fit on an a55 airsal kit (this required first opening up the holes so bolts would align, then finding the right bolts because studs wouldn't works because the holes are so closely spaced so I found some allen head bolts, but even those were too wide/long, so I cut them to length and filed them so they worked, and also grinded the heads of the bolts so they are super thin, so I finally got the intake on). So I get the intake on, make some fresh gaskets so this bitch will mount up on my za50, I pull off the old cylinder, carb and pipe, and throw on the airsal piston and cylinder. Before buttoning it up I turn the flywheel like I should and FUCK, the piston hits inside the case. Why??? I had a a35 alukit on there which is like 67cc's and are you really telling me this 3 extra cc's make the piston so wide it hits the nubs in the case? Apparently yes.

So now I'm mad. It also turns out my double hacked simo isn't going to line up to this kit. A55s have an angled port a-la metras and gilas while a35s are even more extreme angles. So now I gotta find some other pipe and other stuff.

I need to ride a damn moped now. Fuck. I've wasted my time on pointless shit.

dude if yr piston is too big chuck it in a drill and wrap it in sandpaper and go. its a 10 minute job and has worked on several makeshift pistons ive installed on shit. it should work especially if the clearances you are talking about are so small

yea, the bigger issue at this point is the exhaust. I really don't want a tri-hacked simonini.

If the piston is hitting inside the case then all you need to do is a little grinding. No big deal really. Just take the cylinder off leaving the piston on the connecting rod and turn the crankshaft to bdc. Look to see where its hitting. Then take the piston off and cover the exposed crank with some cloth. Really push the rag down in there. Then using a vacuum to suck up the shavings start to grind away. It probably wont take much grinding. When all the grinding is done use a compressor and some carb cleaner to clean out any remaining shavings. I used the previos mether to bore out a za50 for a gilaradoni 80cc kit. I never even split the case open. Hope that helps.

i think this is the second time this happened to somebody. they notched the piston i'm pretty sure.

dude that tab on the za50 is super easy to file down.

don't nothc the piston. just file the nub down.

dude... simos fit on tomos.. just are looking at it crooked... 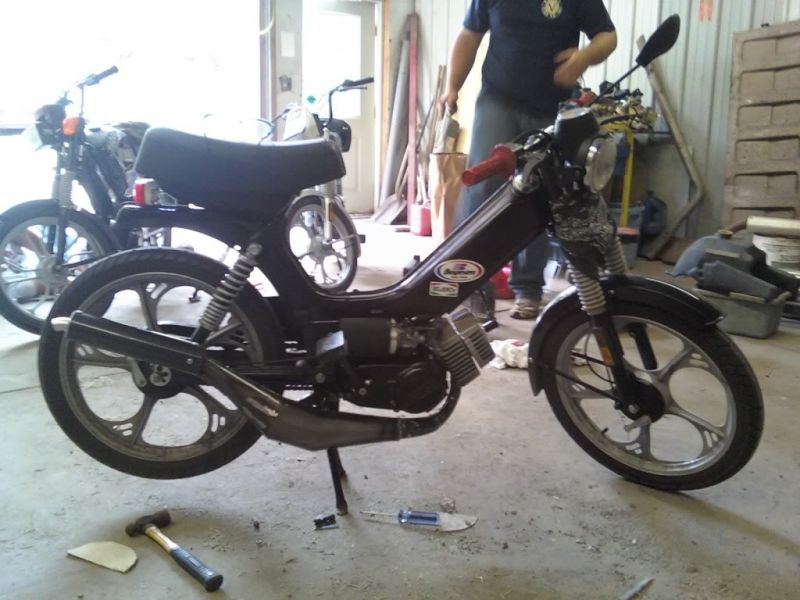 by night time you thnk the day can get better, right? No. I'm rolling home on the magnum and the bitch won't start. This doesn't happen because the magnum is a dream, but I was cleaning the points earlier (FUCK POINTS) and managed to shear my flywheel because I overtightened with an impact wrench. Totally my fault but a huge bummer. Worse, this somehow messed up the spacing of the crank so the bearings aren't sitting right and the crank doesn't turn over well. So that means I get to rebuild and e50 this weekend!!!!

And I know any pipe can fit anything. This is on a ZA50 which is not an a35. I don't have a welder in my shed, so yea. Cool. I know its easy to grind the nubs out of the case, but really? After all my shit theres always more shit.

So now I have even more moped projects!

So again, fuck mopeds. I just wanted to ride, now my blaster is down and I'm sad.

When I break unnecessary shit on my moped I don't get mad at mopeds, I get mad at myself. I think, "Dude! Why do you always over tighten shit you dumb mother fucker." Then I pack up a bowl and smoke it. It's not the moped's fault that you can't fix it or that you broke it.

Smoke a bowl and chill dude. You sound too angry. Be happy that you are 20 and into mopeds.

Oh I totally know this is all my fault. I'm just grumpy because these are stupid issues.