What is the best choice is just the parts you have there are. . For example, there are outlets for 50 to 100 cc + setups. some show a bit more torque, and there are exhausts made mainly for higher topspeed. Below are some exhausts, and what they do.

Sito + basically the same as the stock exhaust, but a tad better. it's cheap, but not for performance at all. it's basically just for replacing

polini Country. probably the crappiest polini pipe out there. it doesn't really do much, but is waaaay better than stock, and better than sito+ on the bright side, you should be able to get it cheap(not here in the us though) 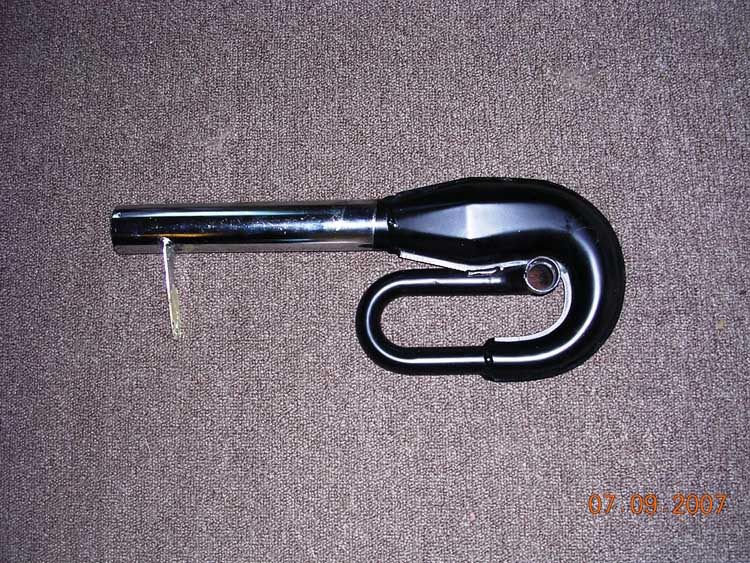 The malossi 28mm exhaust. Specially made for the 50cc of matching malossi.

LeoVince Curling. good low and mid range pipe. not good if you're looking for top end, it does NOT perform well. it's also made for stock/50cc kits, so past that, get something else 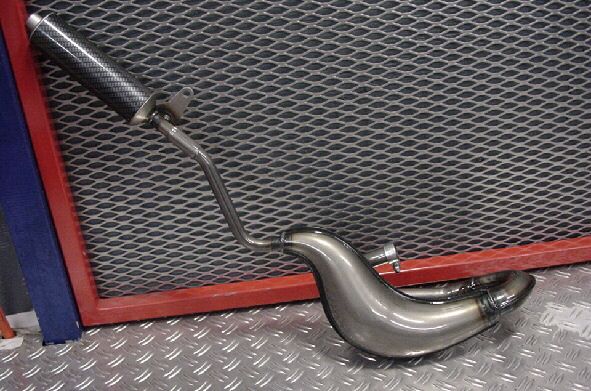 Polini TopOne. good top end pipe, but has a decent overal powerband. great for variated vespa setups. header is prone to rust though, and it's pretty expensive. use on kits, not made for stock engines(60cc+) 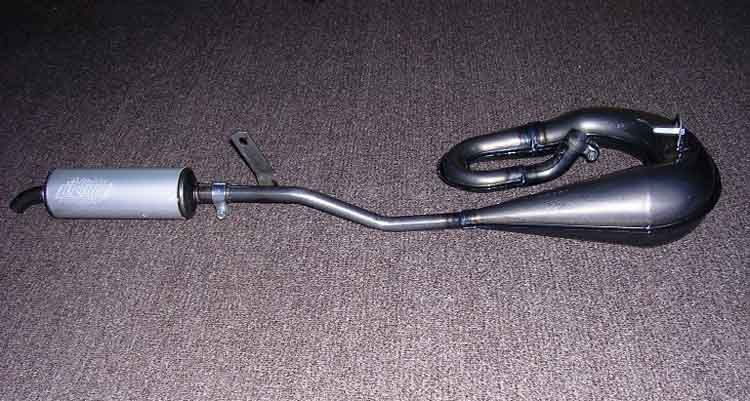 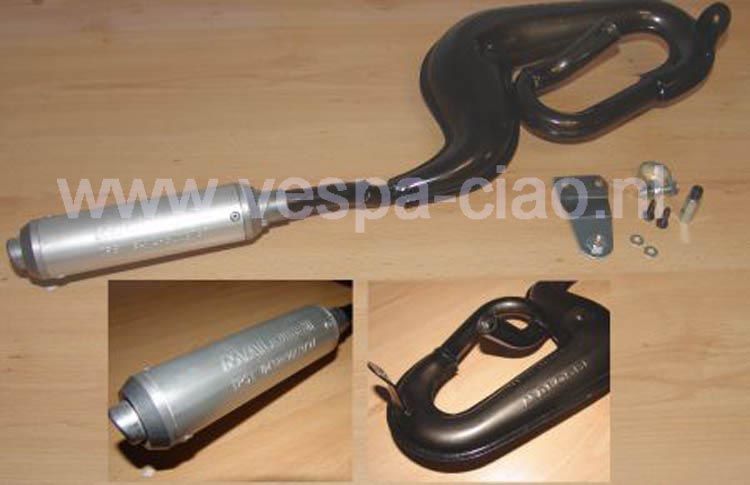 Malossi Too Bad. 22mm exhaust port. use for kits that have that opening size(example: 64ccMalossi) 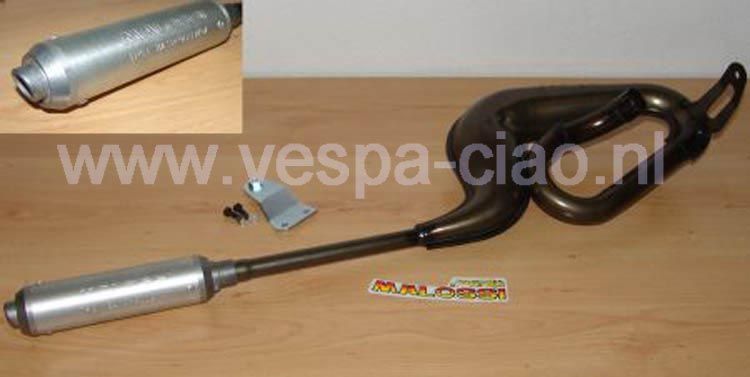 Malossi Too Bad27mm version. this one has a bigger exhaust opening, so is for kits with big exhaust ports(27mm obviously) these too bad pipes have insane low end torque. and drive through the rest of the power band VERY well. good all around pipe. costly however

Phat Bear Exhaust. no info on this as of yet

Gianelli Excel. Goes on the other side, so watch your mounting, so it doesn't clank the transmission. expensive, but it's a top end killer 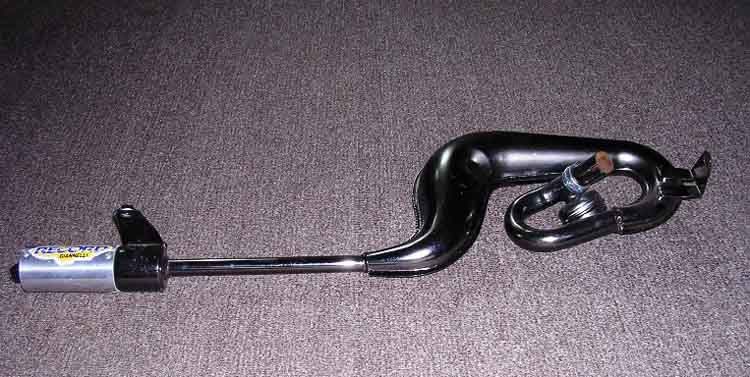 Gianelli Record. even faster than the previous Gianelli pipe. 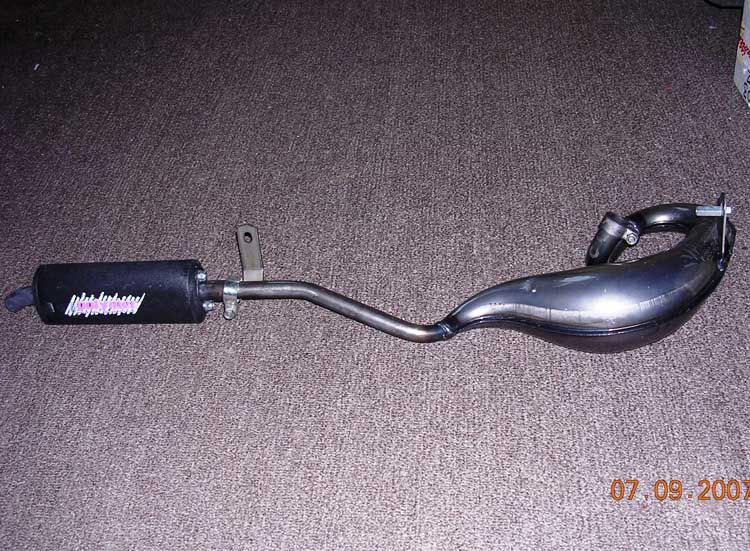 Proma Snake. this pipe is rediculously fast on the top in, but unfortunately it's very very rare, so expensive 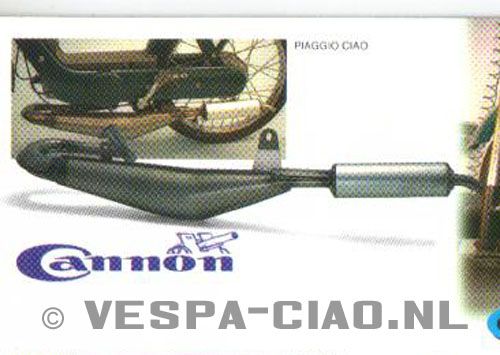 Proma Cannon. made for 70cc+ it's a BEAST very fast through low mid and high. race grade, and very expensive, and also very rare, and hard to get

Proma Gun, great pipe for variated vespas, 70cc+ just like the cannon, but yet even faster? also rare and costly

Proma Grandprix. they say it's more for looks, so i think what they mean is that it sux, and doesnt do much. 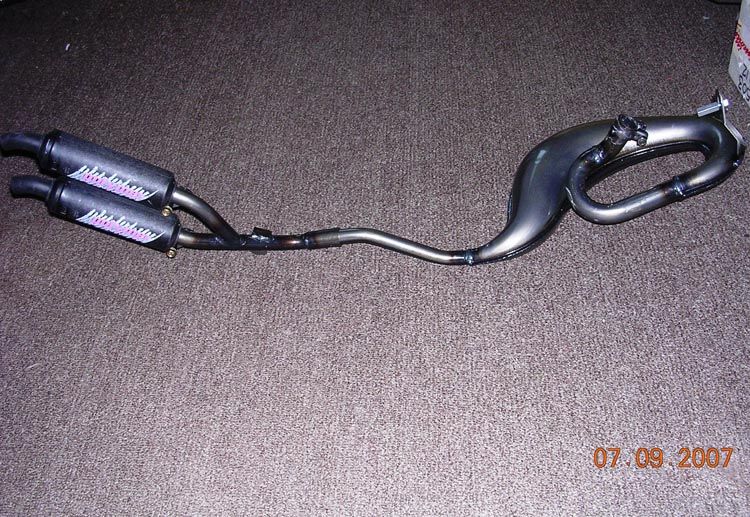 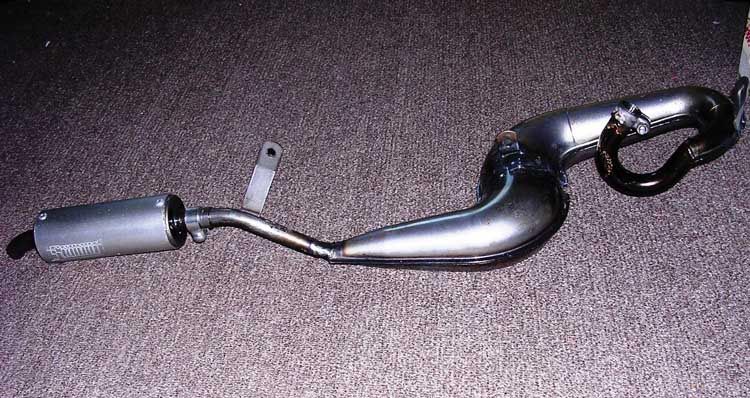 Proma Summit. i think what they were telling me, is this isn't out yet OR they have no info on it. so i got nothing to report on it 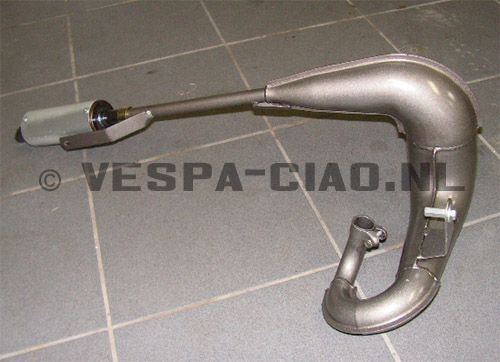 proma Sumit. mounts on top, made for the SI. and made for bikes with big kits on them 70cc+ made for top end, like most vespa pipes.

Techno Circuit. an inexpensive alternative to the faster proma circuit. they said this pipe isn't worth the purchase. there's little to no low end power and in their words: "there is little to no boost nowhere to be discovered!" 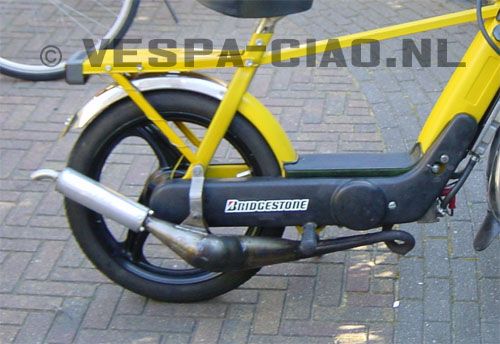 Leovince Handmade. kick ass! plain and simple. made for kits, has a big exhaust outlet. great mid-top end power. rocks your socks off.

homoet. great solid pipe, but ONLY if you tune it. the timing of the pipe they said is off a bit, it kicks in early, so you have to adjust your timing. it's for the 50/60cc cylinders, so it's likea homoet 4p for puchs.

ninja G2. thats right frenchys we get one too!! for all sizes in our version though. (50/60/70) great pipe low mid and super high! is kinda bulky on the downside, and you'll have trouble mounting this thing to be comfortable on smaller model vespas(ciao Si) 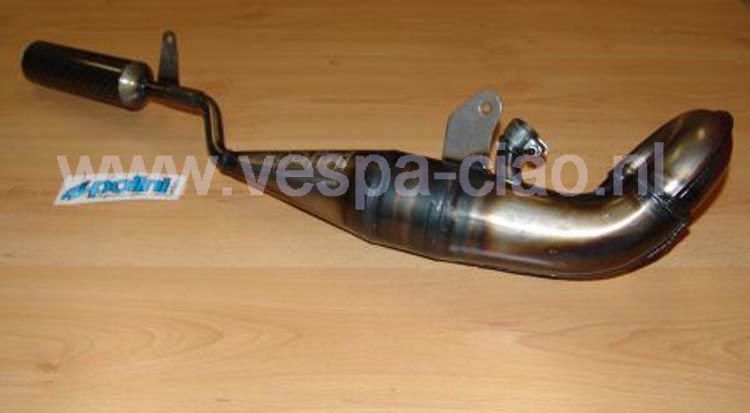 Polini Sp. don't expect to get off the line with this pipe. it KILLS the low end. decent mid range, but a real top end screamer. there isn't really a good transition from mid to high..it just happens?? i guess if you got it, you'll know what that means

Simonini Calibretta. in their words:"this pipe doesn't ever like to walk. it's always sprinting!" the proma-gun is good, but the calibretta is better! low mid, super super fast high end. probably one of the best 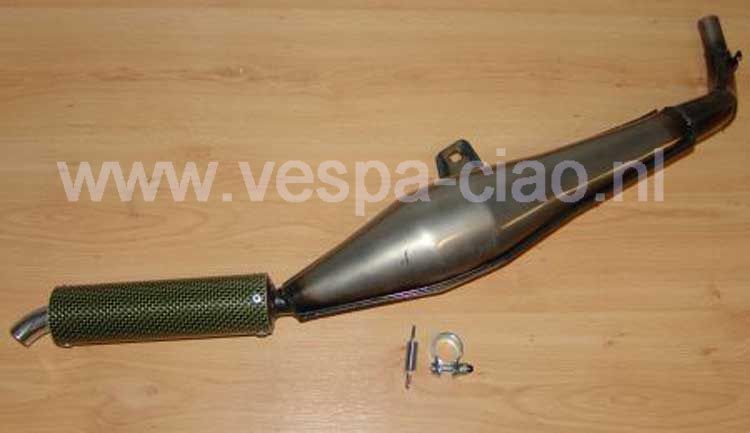 Simonini Carbon. it's made SPECIFICALLY for the 100cc engine, it has a flange, so it doesn't fit on anything else.

Simonini Proline. good torque, moderate high end. it actually kicks ass from a standstill to the mid powerband, thats about it.

Simonini Racing. made for 60/70cc kits. no low end to think of, mainly made for top end power 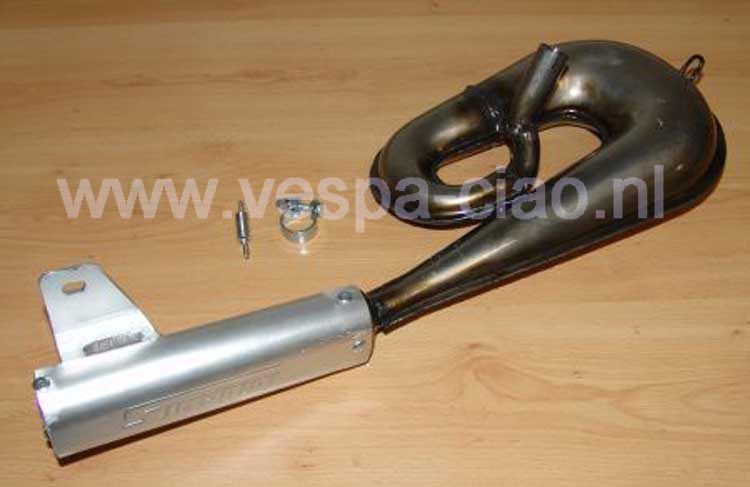 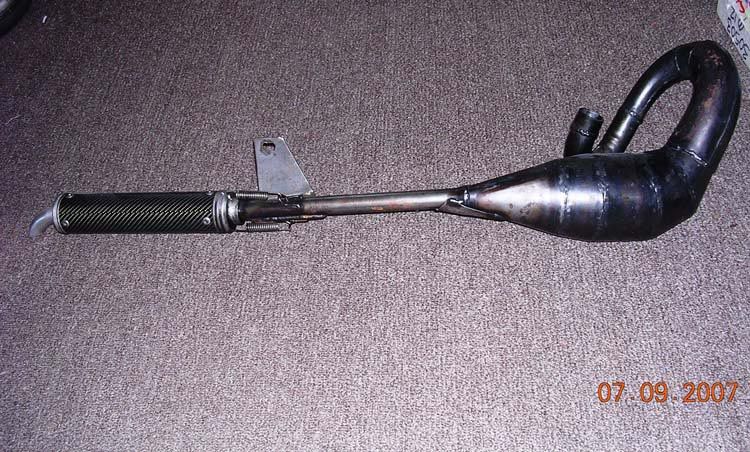 Fabrizi. EXTREME. very very fast, and very very expensive. but most say it's worth double what it costs. not torquey but FAST AS HELL. made for kits with at least a 46mm bore. perferably something with reeds?(membrane) variated peds should get this, to take care of the low end

Great info and nice write up.

i've always wanted a fabrizi for ciaociao, but they are like $400+. i'll end up getting one anyway, or making one designed around my set up.

i translated most of this with google, and got the rest of it from the dudes over at vespa-ciao.nl. so all the credit goes to them. i just hope this can help people out. PLUS i think i might mod one of these pipes for my maxi, just to see what happens, and keep one for my super ciao of course

yeah man, on a side note, the fabrizi is LOOOOOOOOONG i mean, really really long! lol, seriously it will hang off the back of your ped. and it will look super RAD

i don't care about the looks so much, not on something that i've dumped so much money into to make it perform well

i just meant it looks cool because it's so long. and i feel you, this shyte gets expensive!! i dont know if i'm ready to buy a Fabrizi though....i'm going to stick with my simonini. eventually maybe.....but not today. i'll wait until next year when the supplemental compensation kicks in at my job

Fabrizi looks like it's a well designed interesting that it appears to be multi-stage design. Also interesting most of the pipes that perform well have a insanely long stingers on them. Increases bleed down time on the pipe, more pressure in the chamber from what I understand.

Maitland Of the Loin /
Go to branch
maitland

Is the tecno circuit really as craptacular as they claim? It has a good rep, but I have yet to have someone say, yes I have one and like it. I went from xmph to x+xmph with better y. Anyone? Also anyone order the Too Bad pipe from malossi?

Anyone have info on the estoril for vespa? It has a good rep for Puch. Also, why isn't this a Wiki yet?

i agree with maitland. the ninja g2 is where it is at!

Are you guys running that ninja on a stock cylinder, or kitted? I don't plan on kitting my bravo, so I am trying to suss out what the best pipe that will let me keep my pedals would be. Any ideas? So far, I have it narrowed down to the leo vince, ninja, and the one that malossi direct sells. The picture on malossi direct looks like the pipe labeled "The malossi 28mm exhaust. Specially made for the 50cc of matching malossi." but in the malossi direct catalogue it says its the too bad. I was gonna get the tecno circuit but apparently all the dutch say its turd. Anyone want to weigh in?

i am running the 65cc parmakit on a variated setup. actually, i think maitland was running the same, but i think i recently saw it on the for sale boards. but yeah, i'm running the 65cc parmakit on a tfr engine (with cdi) with the intake manifold widened ("check the vespa wiki":http://www.mopedarmy.com/wiki/How_to_drill_the_air_inlet_out_to_13mm). 13/13 SHA w/ polini filter, ninja g2 exhaust, and tjt variator. all on a vespa si.

as for the malossi, i can't remember the size of the stock exhaust port, but the description sounds like the exhaust might be a bit wider on the 50cc malossi kit (i have no clue though).

because i am not sure if the leo vince clears the stand and pedals, i would probably go with the proma circuit. i remember hearing that it works with little to no complications and it is a pretty rad pipe.

Maitland Of the Loin /
Go to branch
maitland

tecno circuits are great for geared single or double speed bikes. It provides mad torque in low and midrange. Unfortunately so does a variator so thats prob why that pipe is balls. It variates out of the powerband.

Buddy Finch noticed this when we were installing our Leo Vinci circuit pipes. It looks like there are four weld marks on the main chamber of every pipe. Restricted city inside?

Hmmmm, I always wonder what would posses a company to restrict a performance pipe.

SIM circuit pipe. great pipe for a stock set-up. although they say it comes out on the left, mine did not. they also said it would not fit a grande, but it did w/ only minor mods (banging mounting tab a bit). cheap upgrade--this pipe, a small pulley, a bigger jet, and a hi-flow filter should get a stock ciao to over 30. i had this on my stock grade w/ vario mods, 13.13, and hi-flow, and was hitting 35 on flats. nice, quiet, throaty sound. i can't see this pipe working well with any sort of kit.

tecno speedy stock +++. similar to sito +. stock replacement that will give you a tad more all-around performance than the stock pipe. has a similar look, but a bigger opening and silencer. the one i got needed to either be bent up at the silencer, or fitted with a small bracket to make fit on a ciao, but otherwise works fine. it's cheap, but i would spend the extra 5 dollars and get the SIM circuit, as it's just a better all-around pipe for a stock set-up.

A bump for the Vespa kids.

I have a too bad pipe on my Grande. I like mine and plan on sticking with it.