This has absolutely never been discussed, so I thought I'd ask.

HAHahhaha... yeah I was trying to rebuild my undercarriage a few years back.. unfortunately their carriage broke down on the way whilst delivering my goods.. received word via telegraph but it took them like 3 years, better go with treats.

Yeah treats sends their parts in one of them there newfangled automobiles. 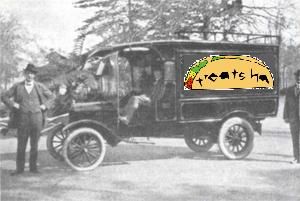 wow, that's nifty. i'd order just to have it delivered in that!

I deal with the Amish. They are more reliable and have great quality & service. ;)

1977 employs at least one member with Amish heritage!

can they make wooden 5-stars for a puch?

does he build/work on them by hand w/o power tools?

OOOOH, I want one of these!!! Can I get it in a nice birdseye maple?

how much oil do I mix with hay to get my horses running at optimum condition?

I would say like 30:1.. you wanna run richer... and please tell me you're running kerosene.

apparently my parcel from 1877 was lost when the courier was attacked and killed by blackfeet indians while crossing montana. two months later, and having received neither my shipment nor word of its demise, i instructed my agent to dispatch a cable directly to the offices of 1877. to my great chagrin, there was apparently no record of my transaction in their business files, but the owners were kind enough to repack and ship my order anew. subsequently to that, however, i received no further word of the transaction until the spring of 1888, when i received a letter notifying me that the parts that i had selected from the mail order catalog were in fact no longer in stock, despite having been represented as such, due to the high tarrifs on goods imported from various european kingdoms. in the end, i had to order my parts directly from a seller in austria/hungary, which i received a swift four months and 8 days after placing my order.

i guess the point of this post is that its crucial to send a telegram or cable if there is any doubt as to the standing of your order. 1877 means well, and will do their best to help you. its just that, whatwith the plains wars in full swing, among many other complicating factors, sending and receiving shipments is not as simple as it might seem.

wow you guys took the way to far. roflcopter.

I ordered from them once and i was severely disappointed. One member of the shipping party contracted dysentery and another got a snake bite before they ever reached soda springs...

another died trying to ford the river