making intakes is a bitch, if u call up MLM im sure they will make you one of their 15mm intakes for a batavus and you can bore the stock intake larger since its got so much material

Hippy, did you take a stab at this over the weekend??

Rafter, tell us more? Did you do this to one of your bikes?

This would be HUGE

Its the reedvalve that needs bigger. The intake for the reedvalve is like 8mm. If it's boggy at low speeds your reeds are probably worn.

every batavus on the road with original reedvalve, the reeds are worn lol its because there is such a small space to work in that makes it hard to modify the stock reed cage or replace the studded metal reeds with carbon fiber ones, if you want a larger reed your gonna have to get one CNC'd and add a spacer or do some custom shit believe me................

If you've got material to spare, just open up the intake where the reedvalve is to fit an existing performance reed block.

not much material on the sides, its actually really thin. you can get a ton out of the stock reed block by cutting out the bridge, drilling and tapping the rivets and putting reeds on either side, but the reed paper i have is super thick malossi stuff, and the one i made isnt working yet.

i just chucked up that cylinder in a lathe and machined about 1/8" off the top, way down into the first fin. there is still a big gap but the bike runs way better. It can comfortably double all day long.

graham how in the world did you cut the bridge out, i have been trying on a spare block i have and cant for the life of me firure out how you did it, I've tried dremmil, drill and grinder i just cant seem to get it, its a lot of material!!

also did you mill the head any and does milling the cylinder 1/8 inch make better performance than milling the head 1/8 inch, how fast is your batavus graham with all the mods and what pipe are you running 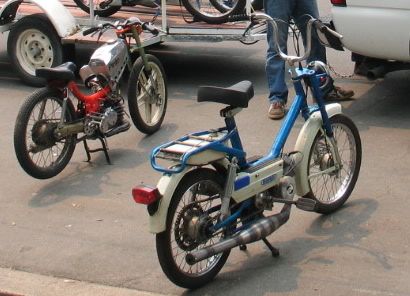 isn't that a solo, rafter?

my bat is currently stock pipe- with the rear baffle pulled out. it has a lot better bottom end and midrange. top speed is about 32-33. i also did a tiny bit of porting (smoothing the edge of the port into the port) on the exhaust side. The piston is still a good 16th of an inch under the edge. I noticed the super slow bat cylinders are a taller casting with more material above the top fin. The cylinders are strong cast iron and have a nice skirt you can grab with a lathe chuck, so its a pretty easy mod, and its totally worth it. makes the bike actually drive-able.

thats a batavus badger. they do look similar to a solo.

no, this project is becoming really anoying... but I think rather than carving an entire transfer a large boost port on the top of the jug with a matching window(maybe two smaller ones) should accomplish the same thing

You could go the comando_brando route and do 360 intake timing since it's a reedvalve intake.

I've been reading this thread with a lot of interest. I got a Bat VA Deluxe, 1974. From this just this genius inspired thread, I've milled down the head (I gotta jump off a step ladder to kick the thing over; 3rd step) and did some major milling on the stock shit ass carb. What I found is the crap junk jet holder leaks. In all 3 Encarwis that I have. So, teflon tape to the rescue. No more leaking, no flooding, no missing, no carbon plugged plug, no stalling. That and I threw the second baffle in the muffler as far as I could and made the main one look like swiss cheese with some clever drilling. Now I can go from 0 to 20 in 155 seconds! So I bought a helmet to deal with the speed. Seriously, mill the head; that shit works.

I also was talking to my French mother in law and she says that Encarwi is French for "take to the dump".

I also looked at the jug to mess with the transfer ports since I came across this:

Someone already did the work on the jug before I got the thing so I just slapped it back on (forgetting, of course, to put the gasket back in).

Call me retarded, but what are you guys "milling" with? A file? I have a Bat with an M48, how far is safe to mill the head and block? And should I use another spark plug washer to raise the spark further out after milling?

sandpaper, tape and a flat surface and move in figure 8, unless you mill it down near flat if you mill it a little bit you will have no problem

I used a bench sandy thing, 30 bucks at big lots

i run 120 to 130psi with no base gasket and an un-milled head on my starflite. low end is still poor, though, but high end is great on flat ground.

all bats have no low end cause the clutch is so poopey.

i mill mine with a lathe when applicable, otherwise i do it with a mill