I am in the process of pulling apart my Moto G.A.C. NTT50 DX Cross, which is equipped with a licensed duplicate of the Motobecane D55 motor, and wanted to catalog some of the process as there isn't much info on these stateside. This bike was Licensed to Moto G.A.C. (along with pretty much the entire line up at the time) for production and resale in Spain.

Here's a great site for some history on Moto G.A.C. and coverage of the models they made.

Here's the bike as It sat prior to getting it to back home. It's a 5 speed, 49cc shifter with pedals that rotate and index to become passenger pegs. COOL

Upon getting it home and getting it running, there was a pretty solid grinding/whirring noise when it was running, I had hoped that getting it to loosen up after sitting and running fresh oil would clear it up but no luck. So, I decided it must be the main bearings (as it occurs whether in gear or not, and followed RPMs) and pulled the motor.

Fairly easy. Single chain, two wires for the entire system, and the carb. While this has a SHA intake on it, either the factory or someone else made a custom shim to run a PHBG 15 on there, which was actually running very well.

Here's a shot of the ignition side. Standard Novi, except produced in Spain. The red cap is the chain oiler cover, and the cast bracket that is attaching the pedal shaft to the frame is a stabilizer/pawl setup for starting the bike.

Keeping with the ignition, here is a better photo of the internals. Everything is MUCH nicer and newer than any AV7 I have worked on. Big Ole condensor that is bolted down upside down with a special tract that the wire follows to avoid being chewed up.

Onto the cylinder. It's a standard motobecane stud pattern, and the cylinder has somem very nice porting, if a little conservative on the exhuast side of things. The biggest thing is look at these massive case transfers!

I don't really know what they were thinking with these. They are absolutely massive. The outstripe the transfers in my Vespa Sacre cases by 25%.

At this point, I am not sure what my plan is for re-assembly of the top end. That bottleneck is a SEVERE interruption in the flow of the transfers, but I don't think that I want to try and match the cylinder to the cases. Mostly because their is no material backing the portion above the stock ports, so my work would have to be very shallow to avoid blowing through. I may go this route, or look into a bigger displacement cylinder.

I pulled the clutch cover off after draining, to begin inspecting that and uch to my surprise my brand new oil was fill with silver dust, which certainly sucks, but lead me to discover the source of my grinding/whirring noises.

Turns out the teeth on the clutch hub are wearing a bit badly. And at first, I couldn't see why that would be. It's on the drive side, but they meshed correctly?

Then, i noticed that the first pad had worn a VERY hard groove in the fingers of the hub.

This correlates to the short clutch throw, and lack of disengagement I was seeing before teardown, and also can point to the fact that if that first plate was locked in place, moving the clutch depressor might be pushing and pulling the bell against the primary gear, causing this wear.

Looking for opinions on this, as I have never had a shifter wear out a clutch hub like this. Not sure if removing material to resurface the fingers is an option, or if that will cause too much slack in the pads.

Notice that the 'back' side of the fingers have no sign of wear , let alone any contact .

I suppose you could try having the divots filled in .

Or , simply take out as much as needed on the front side of each finger to smooth ...

I've done it with no ill effects . Sure a bit of strength is removed , but , how much is debatable .

FYI : It's not uncommon for the same type thing to happen on more than a few different bikes , only with just about each plate .

This basket is from a race bike . Much harder demands than what you'll likely require . 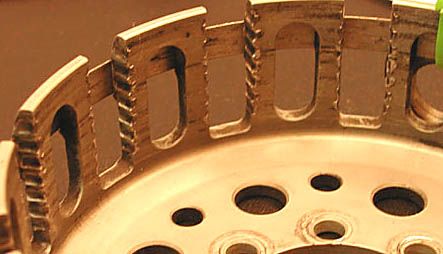 This application is definitely NOT high demand compared to most bikes. But good to know. I will clean up the fingers as needed.

My bigger concern is the wear on the main gear. I am hoping that the wear I see was caused by uneven/sticking clutch wear, but I am worried the mesh pattern is too rough. I'm not sure if cleaning them up with a file is advisable, or if it's a case of just leave it ?

>the mesh pattern is too rough. I'm not sure if cleaning them up with a

> file is advisable, or if it's a case of just leave it ?

In every instance I know of , finished /smooth will always out last rough .

Indeed - I would suggest to clean the teeth well, paint with a sharpie and go careful with a file to make sure you are just correcting the roughness and not the profile of the teeth.

Also might want to consider adding a rare earth magnet to the drainplug so you catch any future filings inside the casings.

> My bigger concern is the wear on the main gear. I am hoping that the

> wear I see was caused by uneven/sticking clutch wear, but I am worried

> the mesh pattern is too rough. I'm not sure if cleaning them up with a

> file is advisable, or if it's a case of just leave it ?

This is so cool, looking forward to seeing more of this. Transfers are yuge

As far as the tooth wear, it's possible that it was run with low or no oil? Not sure of there are other signs that would support it or not.

> This is so cool, looking forward to seeing more of this. Transfers are

> As far as the tooth wear, it's possible that it was run with low or no

> oil? Not sure of there are other signs that would support it or not.

There is a V good chance that it was run dry, at least a little bit before I got it. But I really can't say for sure. I filled with clean oil before I started, and it was noisy on first start up. But telling by the odd plate wear on the hub, that sounds pretty fair to say.

For now I will sharpie mesh the gears and clean up the hub fingers.

neat; thanks for posting about this bike

> neat; thanks for posting about this bike

I'm planning to get to work re-assembling this motor fairly soon, this quarantine also finds me trapped between this, a big wheel ciao project, a lambretta project, and selling a few bikes.

Should be able to resurrect the clutch basket and close up the trans next week.

So I finally took the time yesterday to sit down and address the grooved clutch basket.

I was trying to figure out a way to utilize a grinder, or Dremel to work most effectively, but in the end there is no replacement for the flatness and accuracy of a handtool.

Bench Setup, was able to keep the angle on the fingers by using the table as a parallel guide. worked really well.

End product. I only removed about 1.5 mm of material, and then cleaned up the shoulder. Can't speak highly enough for having good quality files (Nicholson Single Bastard and Swiss) double bastard for fast removal of the material, than single/finish to lean a clean surface, with the half-round Swiss 00 for chamfering and edge-breaking.

I guess the next steps are to button up the trans side. The PO used red RTV as a gasket, but despite the size I think I am going to try and cut a fiber one. Barring success with that, I will use ThreeBond.

That basket looks pretty good to me . Nice work . ;)

You gave that basket case a new life

Was able to button up the transmission yesterday. Even just spinning by hand it feels WAY better.

I cut the cover gasket successfully on the first try, which even at this point in my moped experience feels real good.

I also got the stator mounted again, but I am waiting on a new top end before I can tackle timing.

I considered grabbing an inner rotor, just because they're great, but this points flywheel is easily 1/4 the weight of the standard AV7 Novi flyweights.

I'll update again once I start carving into the new top end to match the transfers.

what did you get for a new top end? Thats exciting

I went with this cylinder which, while not designed for this specific application is pretty sick and doesn't require any stud spacing or stroke changes.

The only issue was that even the VERY large transfers on the kit are tiny compared to the ones in the case. I actually got pretty good at this after matching the kit to the massive transfers on my Vespino.

Basically the goal was to create a shallow trough to help pull charge into the transfers, not really going whole hog to create a cavern. Small round carbide to set the perimeter and end depth, than I chased that back into the transfers with a teardrop and spearpoint carbides, finished off with handfiles.

That's so cool how that cylinder is almost a bolt-on, always interesting to see cross compatibility.

> That's so cool how that cylinder is almost a bolt-on, always interesting

Moby was pretty consistent amongst their motors, which is convenient. I would have LOVED to have a LC moby cylinder, but obviously there are no LC moby kits with cylinder reeds.

The Moby cross comp issue is mostly the rectangular stud pattern and the odd stroke length.

But it was a choice between this (AV14) style kit, and the EW50 kit, which apparently doesn't make as much power. In retrospect, I probably should have grabbed them both just to see but didn't really want to have a spare kit.

By George I think it is.

REBEL YOU ARE A TREASURE.

Been working on getting this top end together. Was able to mount the cylinder and studs on this, as well as the 46mm Airsal topend on my Monza Barcelona motor.

Interesting note, the studs on this motor are M7 studs, with an M6 center shank. The weird part is that the case threads are M7 coarse, and the head threaded end is fine. I have never seen this, but definitely a great way to avoid having case threads pull out from over torquing.

Been working on this slowly, I'm working on making a reed spacer and then cutting the head to match the new displacement.

In the meantime, got the plastics mounted up and the fender repaired with a NOS Utah fender support.

Excited to see more of this, been awhile

> Excited to see more of this, been awhile

Yeah man, it's just been living in the back of the shop. The motor is just much more tedious to work on because anything I fuck up will have to be replaced by parts from over the pond.

Currently biggest heartache is tackling the head. I have to profile it by hand as I really don't have anyone who will reliably cut it, but it should easy with some careful layout.