I should have a flywheel if you decide you need one.

I probably do. Let me know. Thanks

You might ask Pops if he has a spare PEI .

Broken magnet should be replaced .

I've had a magnet come loose from the flywheel and had good luck gluing it back into place , but , the magnet was whole . 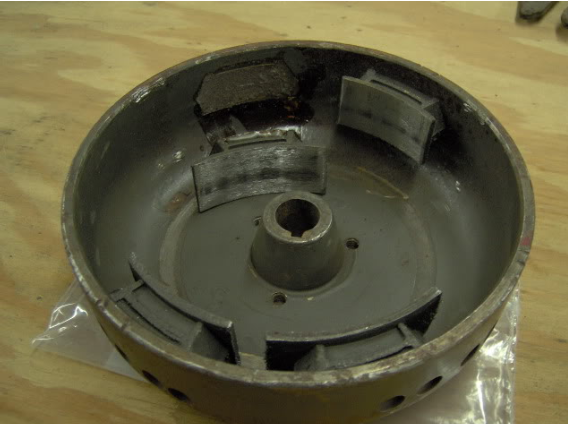 I'll check it out and let you know ..i know i have it but not sure of condition ..

Importance of that magnet for the running of the bike actually depends on which magnet broke. If it is a magnet that is on either end of the ignition coil when the points open then you will be producing a feeble spark and the bike might not run. If it is not them it is just the accessory coil will be a little week in part of making the electricity for lights, so you would have flickery lights. Depends on how much is broken off, you could have a bit more noticeable vibrations o the engine.

When the magnets are just about to leave their ful influence on the ignition coil is where you would have full saturation and the biggest potential for a bright blue snappy spark at all speeds. Less magnet on one end would produce less flux so less excitation to produce electricity.

Jack my flywheel is from an 82 and looks different

Maybe Jack will post a pic of his broken flywheel .

Maybe some measurements would help ?

> Maybe Jack will post a pic of his broken flywheel .

> Maybe some measurements would help ?

Haha. Getting old ,eye site bad ..i thought jack posted the pic above that i see now you posted ..lol..oh welll maybe i have the same as his..been working on a commuter that has got me puzzled ....

If the missing piece is still in decent condition , just glue it back into place . Use a clamp when allowing the glue to cure .

Jack that looks more like the one i have..let me.know if you.need it...not sure if you are one without income now..if you are it is free just pay shipping..if you still have income pay shipping and donate what ever you want extra to go in a fund we have for buying groceries for some that are in need ...i will send the stator with it also..it is.untested but.should be ok (edited)

I’ll take it. I will pm you. I will also try gluing old one together. Thanks for all the help. My guess is the magnet just loosened with age and caught the stator. Quite a bit of corrosion on stator side in general.

FA50 takes same flywheel puller as qt50 and Yamaha Chappy. Being a fan of both those bikes, I had one in hand. I informed the kingdom of treatland as well.

> FA50 takes same flywheel puller as qt50 and Yamaha Chappy. Being a fan

> of both those bikes, I had one in hand. I informed the kingdom of

You might have the correct tool but the previous owner may have not. Thats what ya get into with 40 year old antiques.

CDI you still need the same magnetic flux through the exciter coil for a good spark, just instead of points opening you need the target coil and trigger in alignment to signal the spark to the box.

A special thanks to jack rutherford for his very generous donation to a worthy cause in this bad time..it will help those in need a lot..thanks jack

Thanks for your help Gene!

> good spark, just instead of points opening you need the target coil and

> trigger in alignment to signal the spark to the box.