A flathead screwdriver? Unless a previous owner butchered the jet, it should look like this

The 104 a carb has at all pin sticking up the middle of the carb cylinder,it’s accessed from the top and is round with a flat side that must be removed with a special tool,there is no separate long valve that goes inside the jet

"104 types have an idle tunnel with a separate fuel hole. A bigger idle hole makes a richer idle mixture. But it is not removable and not easily serviced."

Still seems like you can unscrew and change the main jet with a flathead, unless what you are talking about is the weird atomizer/needle and not the main jet.

> cylinder,it’s accessed from the top and is round with a flat side that

> must be removed with a special tool,there is no separate long valve that

> goes inside the jet

I think you're talking about the needle?

Yes that is correct .The only reason is the top half of carb is not cast flat.when you put on the bowl half it won’t fit flat.Ive tried other top half’s and they fit fine with the bottom.I was trying to Frenkenstien one together .It Leaks the way it is now

Can't make the bowl conform to the carb body ? 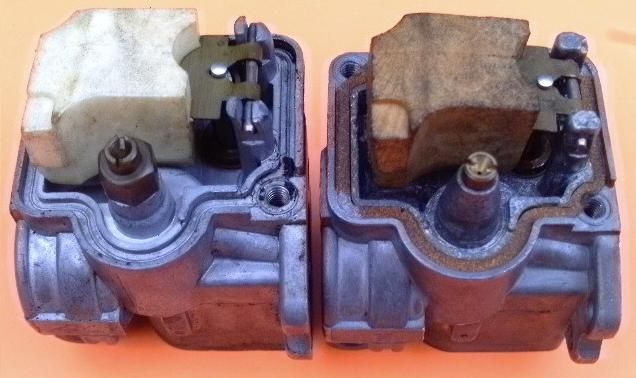 Assuming you're referencing the one on the right. It's unclear from the Myron's page whether there was a different float bowl design for the two different carb body types, but from what I can tell they should be the same.

Where is the float bowl contacting the body that makes it leak? Pics would help.

Thank you for the response and research.I bought this bike recently as a present for my grandson, he wants to be a mechanic. The previous owner could not get it running and bought him another.He also had a friend who also could not get it running.He had 3 carbs .2 aftermarket and the original. The original had a heavy coating of some type of caulk around the seam I scraped it off, took it apart .The throttle valve was stuck in the cylinder of the upper body.I removed it, cleaned and polished and cleared the hole in the center of the valve that goes over the pin thingy.

I took out the main jet it was #58,which is correct .I followed all spec and print ,put it on the bike knowing it would prolly leak but at least maybe it would run,it didn’t. I’m thinking it may be an ignition problem because this motor has had 3 carbs.fuel tank cleaned ,peacock cleaned.new fuel lines filter,ethanol fuel and correct 50-1mix and it still does the same thing.It will only pop a couple of times .It has good spark and compression.I took the cap off the flywheel.There is a lot of dirt in that system.I just ordered a flywheel puller and adjustable pin spanner wrench,it’s obvious this area has not been looked at for a while.any suggestions ? Thanks again

>any suggestions ? Thanks again

Definitely , clean the magneto . It should be pristine clean .

Check that all connections are clean and scratch tight , including all ground points .

Thank you again .do I just use a spray cleaner or fine sandpaper.Ill check the grounds for sure.When I got the bike the hand lever for the clutch didn’t feel right,it was real sponges and wouldn’t release on it’s own I took the clutch cover off cleaned up the oil,took out the threaded pin ,the bushing was there but the tension spring was missing. The moped parts stores didn’t have one but I posted on this site and got one which is on the wayI don’t know if this has anything to do about it running but it will sure make it easier to work on. Thanks

You can start with brake cleaner on the magneto . You may have to get more aggressive with sand paper or even flat files to remove any rust .

You should check the clearances between the coils and wheel magnets . Closer the better , without touching .

Also check the seal behind the stator . No leakage allowed . ;)

I like to use contact cleaner for electrical parts. Clean and gap the points, set the timing, check all connections and grounding points as mentioned above.

If you're getting a strong consistent spark, the correct range PSI of compression, and fuel is being delivered from the float bowl to the cylinder then you should have a running bike, even if it runs somewhat poorly.

Just to be clear , brake cleaner leaves no residue .

Thanks for all the great advice,as soon as I get the clutch working and all the tools I’ll tear into it my grandson.The only issue may be the timing,hope we can figure that out.My Branson wii be in seventh heaven.he hasnt seen it yet, a Christmas present

Along with a set of tools and repair manual.

These other guys can give you a lot better advise than i can but i just started one today that gave me problems starting .it would seem to want to hit but wouldn't until i took the exhaust loose ..the exhaust was plugged with crud and dirt dobbers ..make sure you have a spark plug that hasn't been gassed down several times also ..

> started one today that gave me problems starting .it would seem to want

> to hit but wouldn't until i took the exhaust loose ..the exhaust was

> plugged with crud and dirt dobbers ..make sure you have a spark plug

> that hasn't been gassed down several times also ..

When we visit north central Illinois , I have to keep a close eye on my exhaust . The mud daubers can fill the exit hole in short order . Caught me more than once . ;)

Thanks again ,I’ll give that a try I also just noticed a wire on the front brake that’s hooked up to the break light is broken and I took the black cover off to check points and timing and a wire for the rear break light is also broken is it possible that it will not run because of this issue? I still have spark but it will only fire once or twice