So I've replaced all kinds of stuff, I've even gone back to replacing old parts seeing if that would do anything. It seems that all of my efforts were for nothing.

There's something I'm not figuring out, I guess.

1. I've cleaned and tried the old carburetor. I tried a new carburetor.

This is a mikuni clone, known as a miniky. No luck. I've even tried swapping parts between the two carburetors, which are quite similar but not completely. that didn't seem to do anything except for giving me a couple days of false hope when the moped would run.

3. Checked for air leaks and everything else I can figure.

*side note, I am still running this moped without the electrical system in play. All I have is headlight power. My connector is disconnected behind the headlights for the systems electrical connection.

I've always run it this way but maybe somebody knows something I should know. LOL

when I got this moped, the sides of the air filter cover were kind of stretched apart from age and the lack of the little metal clips that I think were supposed to go on there.

I've even tried other BS air filters that can work on a wide range of small engines but those don't seem to be helping either....

I'm going to feel real dumb if it's some kind of head gasket leak or bad piston and rings.

Everything is original on this thing, so...

What is the compression reading ?

I need to know what to do to get a reading.

I recently lost the one person in my life that knew how to do that.

Any help on that would be beneficial and appreciated.

> I need to know what to do to get a reading.

> I recently lost the one person in my life that knew how to do that.

> Any help on that would be beneficial and appreciated.

Sorry for your loss . 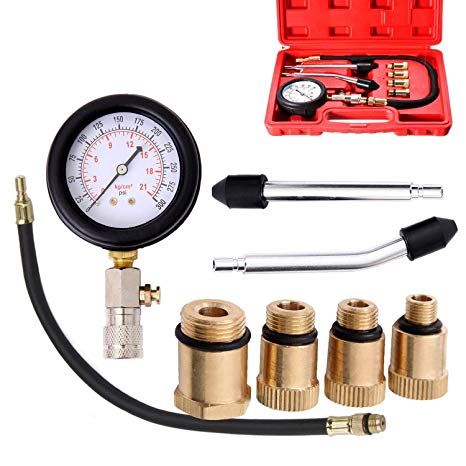 Thank you for that and thank you for the tool suggestion. Luckily enough I have a pulley removal system I need to return to harbor freight, so I'm going to exchange for this. I might as well, considering I have a couple of two stroke 69 cc bike motors and an old boat motor I want to restore as well.

A decent compression tester will last a very long time .

I've had mine for about 50 years and only recently has it started reading a bit off .

Like most other tools , keep it clean and away from heat or extreme conditions .

Found the cause. Petcock from my 2-stroke engine being used on this moped stopped working. Never assume one of those little buggers are going to keep working. Lol. Huge lesson learned

Good you got it sussed .

Assumptions usually get me into trouble . :(

I put my trust in those petcocks for my 2-stroke motors, I realize this one's been in that moped for a year. Pretty sure sediment got in there and messed up the gasket.

All good and a pretty cheap fix.

as always, thank you for all who help out here. There's not many of us to bounce information into or off of for this kind of thing.

Most people see me riding and they look at me funny cuz they don't know what the hell they're looking at. Hahahahaha