Hello, I have a Honda Aero 80 1983. I got it about 3 weeks ago. I was working on the fuel filter. Then i replaced it cause i thought that the filter was causing the moped to stall after around 15 minutes, but that didn't fix the issue. So then i thought it was the carburetor so I took the pin and the other things out. Then i put them back in. Now when i start the moped up it spins the rear wheel and i can't seem to figure out why it will not stop. Thanks for the help! 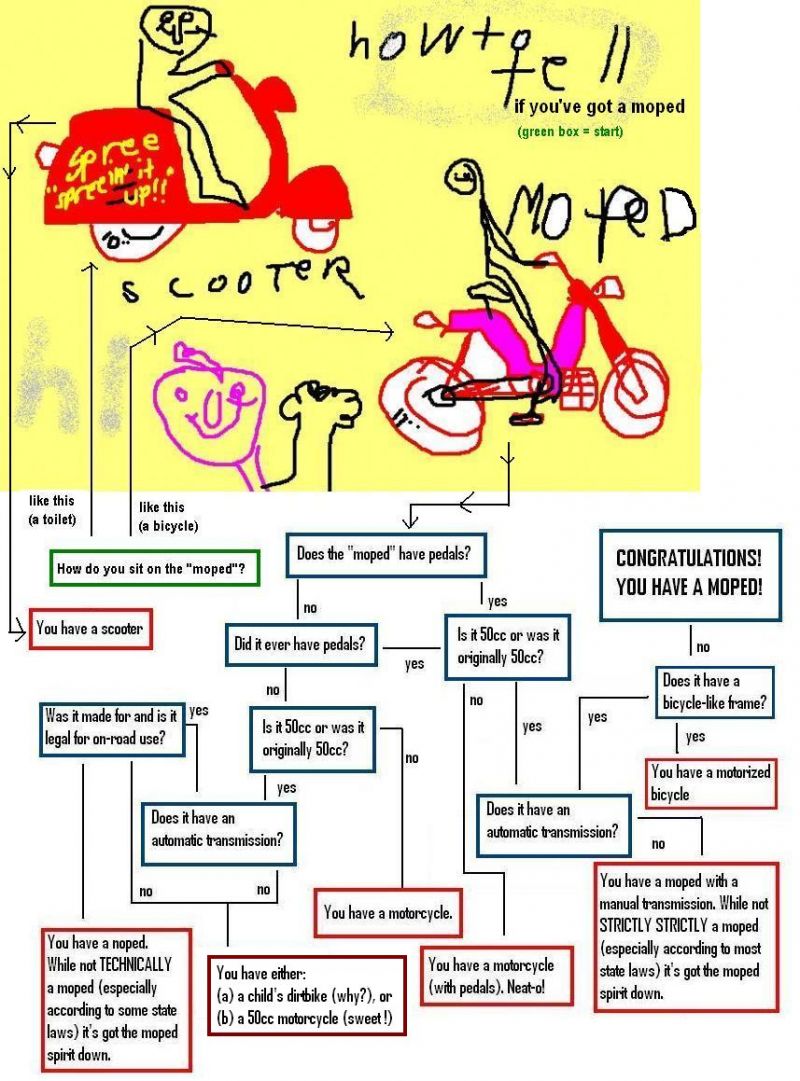 You have a scooter but Fred's guide may help

... okay so i have a scooter apparently but what is causing the rear wheel to spin while i am not touching the throttle?

The transmission is constructed in two sections, the input section, which is connected to the engine main bearing, and the output section, which is connected to the rear wheel. The rear wheel connection is a relative innovation, having first appeared on the race circuit during the mid-seventies. It improves the efficiency of the engine by providing road speed and engine load feedback to the power dampener system. The connection is typically made via a chain and sprocket arrangement. This layout has the advantage of being inexpensive, but is vulnerable to dirt, requires constant lubrication, suffers from backlash and tensioning problems, and requires periodic replacement.

The transmission operates by dissipating the excess energy created by the engine. The rate of energy dissipation varies with the crankshaft oscillation speed, the road speed, and the transmission dissipation factor. The vast majority of transmissions are of the manual selection type, and contain up to four vaned dissipation impellors. A ratio selection lever, called the "gear shift" is used to slide impellors from the input shaft to the output shaft and back.

The term "gear shift" is really an anachronism, left over from a time when low-cost farm tractor motors were directly coupled to the drive wheels using variable gear sets. Because the tractor loads were so high, and the engines were so weak, power dissipation was unnecessary. However, it was necessary for the farmer to physically exchange gear sets to match the tractor speed to varying terrain or applications. This was accomplished by stopping the tractor and unscrewing one gear set in order to replace it with another, known as "shifting gears around."

If the back wheel is spinning at idle then it sounds like your oscillation impellers are not receiving proper lubrication, is the oil injection tank full with good quality synthetic muffler oil or are you using the biturbo lubricant?