I have a Kinetic TFR that I bought on Craigslist as my first ever moped. I was ok with the fact that it had a busted headlight mounting and the gas tank was rusted out so it had a plastic tank strapped on because I was just so happy to feel the wind in my hair. Now I'm starting to wish I didn't have all these issues and I'm wanted to get her fixed up. I have looked online and can't seem to find a headlight replacement or a spare frame for sale. What's the best place for TFR parts? I also need to rebuild the clutch this weeked but hopefully the bell is reusable even though it got pretty torn up when the shoes melted to it.

Is the tank leaking. Check the wiki for rust removal. Ebay and here, are your best bets for parts.

Hello! There seems to be more Kinetic TFRs out there than I thought. I picked one up myself with a busted headlamp assembly.

A little history on what I have learned about these mopeds. The company that built these mopeds stopped making them maybe around 2001 and started making car parts for the Indian car market. That's why there seems to be a shortage of replacement parts, unless used.

The drivetrain is somewhat of a copy of a Vespa Ciao. Although I've heard not all parts will interchange.

Mine is currently down for repairs. I think the starter clutch is what's locking the engine up on mine. Treatland sells some Kinetic parts but seems most of what that are showing they seem to be out of.

Here's the wiki on Kinetics:

As far as the busted headlamp assembly goes. These are supposed to fit: 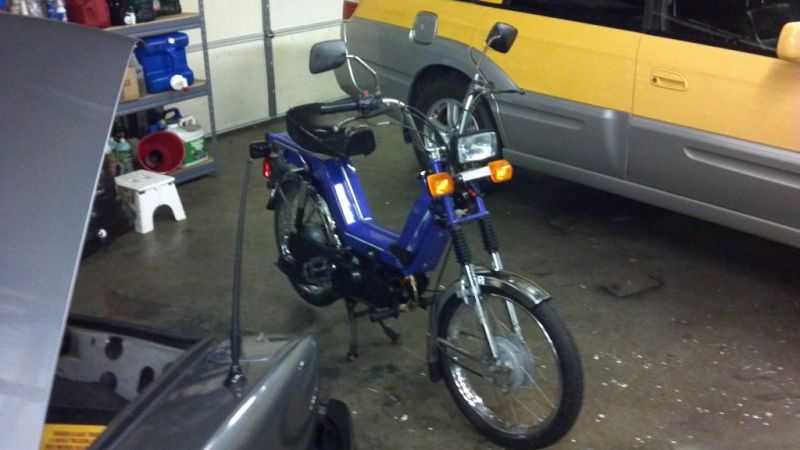 I took some alumnium and made a bracket and mounted a 5" driving lamp in it's place. I used an LED H3 bulb for fear the 55 watt halogen might overload the electrical system. I mounted a universal moped horn to one of the allen bolts. I drilled the brackets that the headlamp originally went to and mounted my turn signals there.

My tank and petcock valve was trashed up. I put some Evapo Rust in mine and let it sit for three days. Flushed it out with water then kerosene. I used a lawnmower filter to catch any more crap that breaks loose. And replaced the petcock valve with a 1/8" NPT ball valve. As long as you put enough Lock-Tite on the threads, it shouldn't leak.

The tank has pinholes in it so it pretty much needs to be replaced. I'll check out the headlight though.

I have a kinetic headlight bucket for sale, and I'll tell you how to clean the tank..

Hugh, how much for the headlight? Can you send me a pic? I would love to get the tank cleaned up but how do I deal with the pinhole leaks?

Mjriemer7@yahoo.com for pics if you don't mind.

The tank on my Tomos TX-50 was rusted out. It eventually devleoped pinholes. I patched over them with fiberglass which held for awhile. Then it started leaking again. I eventually found a good one off Ebay and replaced it.

Fill it with Evapo Rust, flush it out with water then something like kerosene, mineral spirits, acetone, laquer thinner. Whatever kind of solvent you have laying around. Sand off the paint then patch over the holes with fiberglass. JB weld doesn't work too well.

If 100% gas is available in your area, try not to run E10. I tend to think the alcohol is what ate through the fiberglass. Gasoline doesn't seem to phase it. I've heard E10 was what was eating up fiberglass gas tanks out of boats.

Also alcohol is bad about absorbing water which will only cause it to rust worse.

Eventually you will most likely have to replace the tank. But the question is, can it be removed? It looks like they are part of the frame!

That's the problem. The tank is part of the frame, when it rusts out the frame looses its structural integrity. The good news is that you should be able to find a decent tfr frame for only a few dollars. You might even grab a whole parts bike.

I thru away a perfect frame

If a kinetic frame has multiple pinholes in it forget it!! Get another frame off ebay for ten bucks!..