So as soon as I fasten the clutch housing (in my hand in the pic), the 1st speed gear won't spin and therefore the sprocket (& rear wheel) won't spin backwards. This doesn't seem right to me, and makes me think a washer was placed out of order. I've been following the manuals, so I'm not quite sure what it can be. 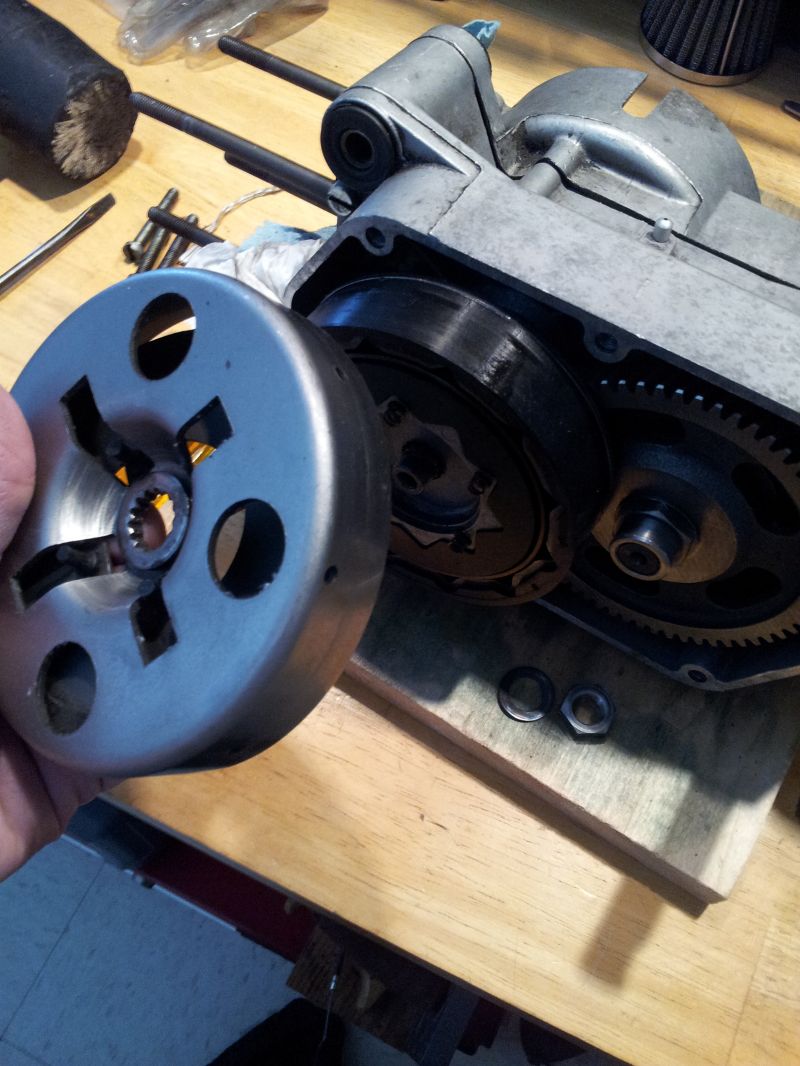 The washer I'm suspect of is under the 1st gear; so the order stacked on top of each other is as follows....

- first gear (with the free wheel in the center) 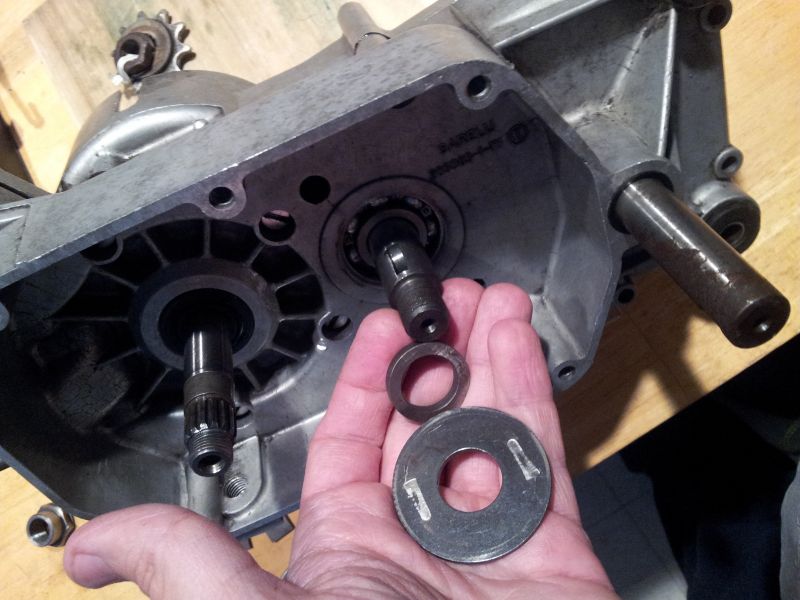 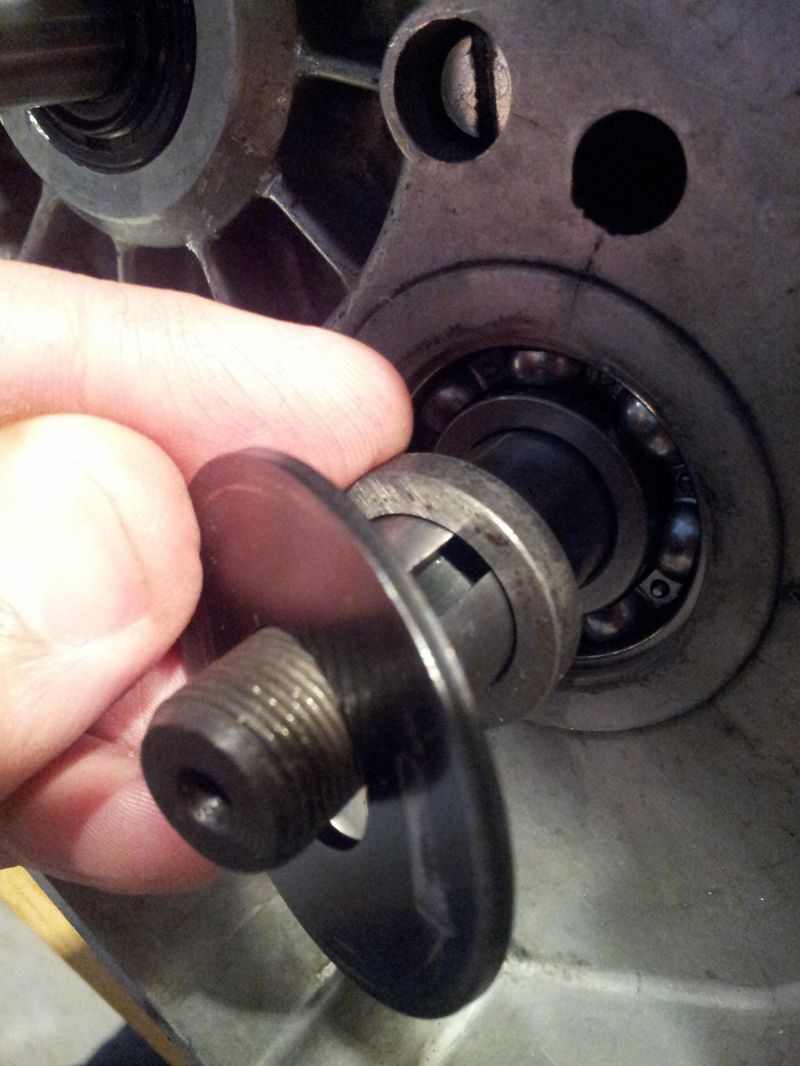 Looking at the parts diagram, it looks like you have the correct spacer, then washer, order.

After you install the freewheel, and then the first gear, the gear should spin free when rotated clockwise. Does it?

I would have to guess that, if there is a problem, it is with the freewheel.

The manual states to first install the freewheel, then use the tool to hold the springs and catches in place while you slide the first gear on. It doesn't say to slide them on together...don't know if that makes a difference, but there must be some reason for doing one then the other and not together.

I agree with Brian Solex. Make sure its not the wheel instead of the motor causing lock up. Hard to diagnose over the puter but maybe someone has had this issue too.

Thanks for the replies.

"After you install the freewheel, and then the first gear, the gear should spin free when rotated clockwise. Does it?"

Yes indeed. It's funny, because a manual I checked out has kind of contradictory instructions, but I think it was just a poor choice of words on the copywriter's part.

"The manual states to first install the freewheel, then use the tool to hold the springs.......don't know if that makes a difference"

I was dubious of this, but I re-installed it regardless to make sure. Seems to be no difference.

"Make sure its not the wheel instead of the motor causing lock up."

It's definitely not the wheel itself. Reasonable question though.

So what is happening is...when I fasten the clutch housing or whatever it's called (it's in my left hand in the top pic), it prevents the clutch bell from turning; this is not because the inner rubber it being pressed against, but the brim of the bell is being pressed. I see it happening, but I can't wrap my head around it. What the heck is going on?

I would have to suspect something with spacer 24 or washer 27.

Make sure both are present and that you did not mix them up.

On the one-speed, the washer has a round side and a flat side, and it makes a difference which side faces in/out. (flat towards center of engine.) I would think that the two-speed might be similar.

I have everything in the correct order according to the diagram you posted.

27 is a 'flat on both sides' spacer. The diagram makes it seem a little thicker than it actually is, which is making me paranoid thinking the "spacer" is the wrong piece (thick washer) incorrectly put in there by the previous owner. BUT, i don't think that's the case considering this engine looks like it's never been open. Also, if that's thicker, it will shift the teeth up higher and not line up with the teeth on the main gears.

I'll go re-examine it tonight when I get home from work. Plus, I'll try reaching out to 2 speed owners to see if there is something not as intuitive going on here that is specific to the 2 speeds.

These are the two guys you want to contact:

I've been having similar issues albeit with a 2-speed VIP when trying to deal with a stuck in second gear issue, experimenting using zip ties instead of the rubber nubs (which I have but don't want to use until I understand the inner workings of the clutch). I'm wicked anxious about finally getting this problem taken care of at least for a little while as I have a 70cc Proma kit on the way that I want installed on the bike and running before winter.

As of right now the bike will not start at all since I last reassembled the clutch (2nd time) and I'm going to do everything over again. I have new 1st and 2nd gear rubbers, a new starter plate, and as mentioned new rubber nubs

1) Is the starter plate (#32) supposed to be able to move inside of the clutch drum (#33). I believe when reassembling the each time I tightened the zip ties tight enough that the plate was pretty much fixed to the inside of the drum. Looking at the diagram it seems like maybe just the plate is supposed to be moving within the drum (through the lever action) and not the entire drum, am I right?

2) What is the best way to install (and remove if at all possible) the rubber guys without destroying them? Are they only supposed to go through the starter plate or do they need to go through the pushing plate (#34) as well? I'm getting the impression that the pushing plate is simply just supposed to slide on the long end of the rubber guys and not be affixed at all to the starter plate...

Thanks in advance for any answers/support that can be offered and please forgive my ignorance.

having the same problem on a 2 speed noi, did you figure out a solution?

does anyone have a 2 speed noi taken apart and available to measure the thickness of # 24 spacer? the diagram makes it appear thicker than the spacer w/ the teeth and mine are about the same thickness.

also in the second diagram it shows 2 #25 spacers

#24 (for me at least) is about the thickness of a quarter.

If that's the right spacer, which I think it is because it doesn't look like the case has been open ever, then the diagram does indeed exaggerate the thickness. Maybe someone else can chime in with more confirmation.

I'm not quite following the second part of your post.

the second diagram didn't post but I have another diagram that shows two of the spacers that go between gear 1 and two and fit into the slots on the freewheel.

Daniel M.-Good news, I fixed mine tonight-thanks to all that helped. My problem sounds exactly like what you described original, I used some thin shims from a vespa wheel and was able to play with the shimming on the clutch bell until it functioned properly. Now my motor can spin separate from the drive gear and rear wheel until my clutch grabs and I can roll my bike backwards like it should. sort of wonder if using air tools if you can over tighten the nut that holds the clutch side on too? Anyway get some shims and play with it until it does what it should.

Ahhh, shims. I was originally thinking that, but you can see in the pics below that there's not much room so when you fasten the nut on the little thread available, the clutch tightens up fast causing my problem.

-Does the pics look right as far as amount of thread available before screwing on the nut?

-Where did you place the shims?...and was it just a few washers?

-Did you run it yet? 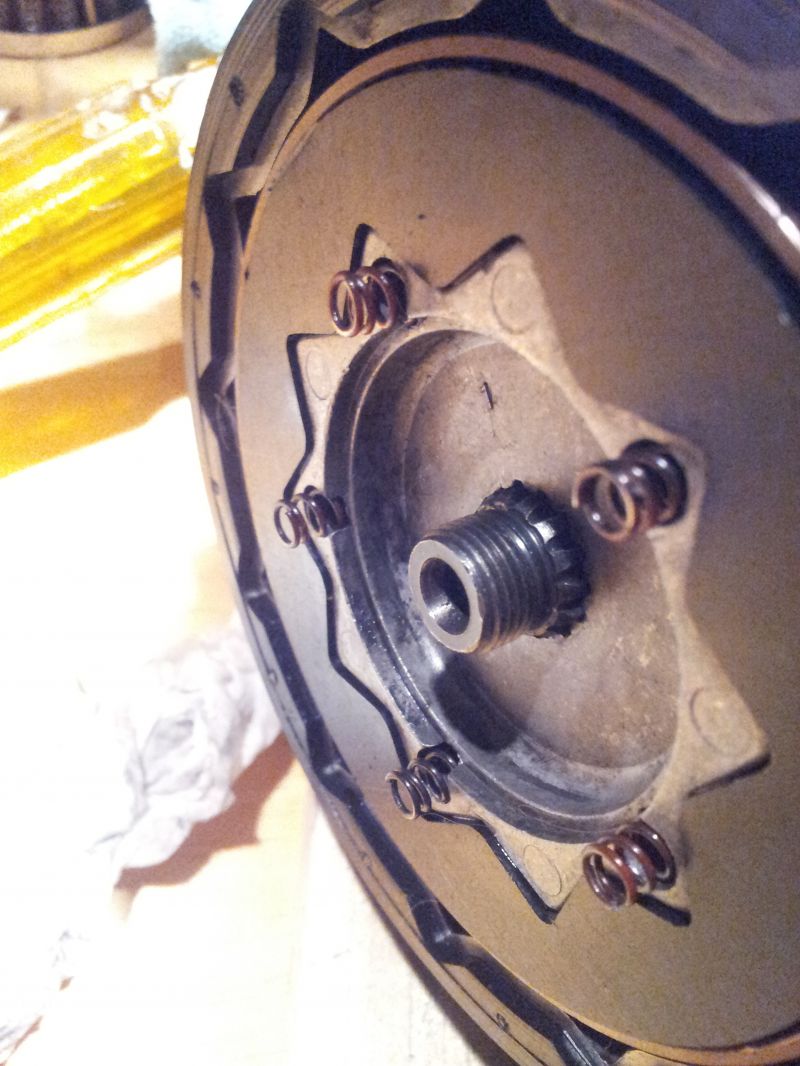 after putting on the clutch drum... 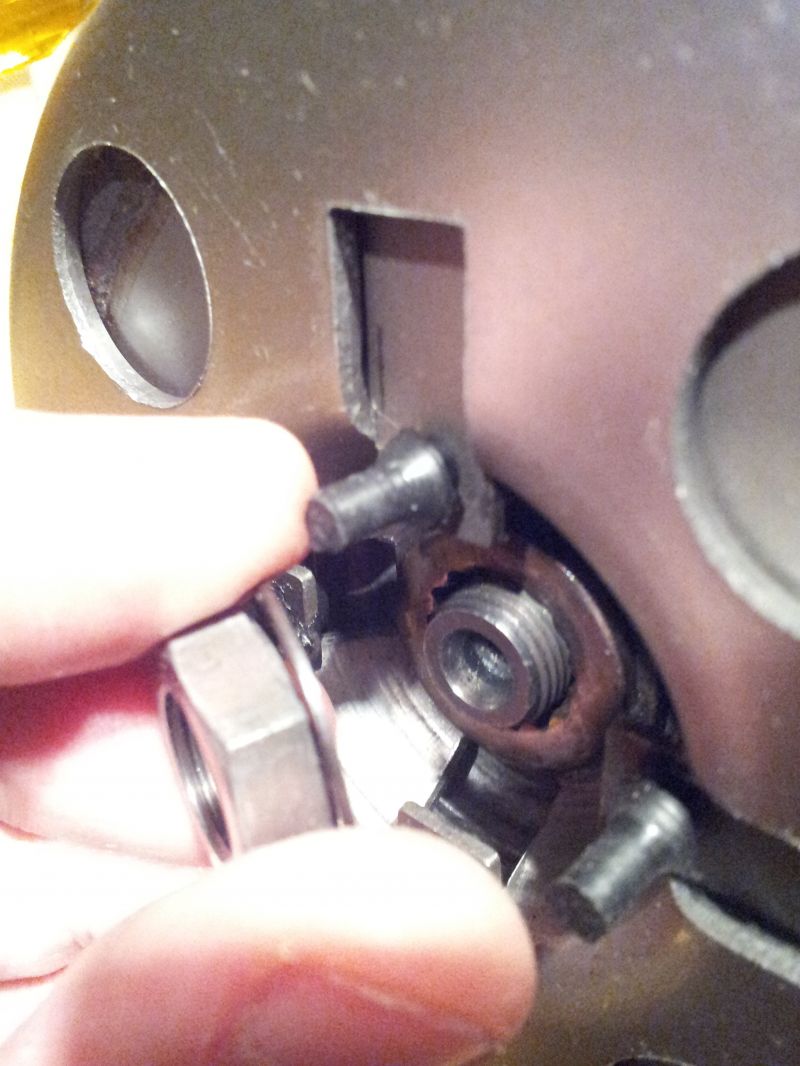 They were really thin shims, you want the clutch drum to be spaced out just a bit. It took a few times assembling trial and error.

I ran it tonight

I'm working through a similar issue with my VIP engine. I've tried shimming it a few different ways and have had it where the wheel will spin backwards without engaging the motor -but only with the crank nut relatively loose. I've read that the rubber clutches will swell in detergent oil, but I've also read that running the motor for a while will 'loosen' the tolerances between the first speed clutch and the starting plate / clutch drum.

Does anyone have any definitive experience with handling this issue? Thanks in advance!

Maybe try running it? Is the pedal mechanism jamming up?

The pedal mechanism works as it is supposed to. I will run it some more.

Does it up and down shift going forward?

My runs have been real limited bc of this issue, what does it mean if it won't shift?

> My runs have been real limited bc of this issue, what does it mean if it

The inner bell surface area where the first and second gear sits on the hub spin together at is probably toast. Make sure #17 spins smoothly inside of each other.(edited)

I've reviewed every part in the clutch stack and everything seems to be in tip-top form, but it still won't 'freewheel' backwards. What am I missing here? Could the countershaft or starting mechanism be at fault?

> I'm working through a similar issue with my VIP engine. I've tried

> relatively loose. I've read that the rubber clutches will swell in

> detergent oil, but I've also read that running the motor for a while

> will 'loosen' the tolerances between the first speed clutch and the

> Does anyone have any definitive experience with handling this issue?

Its actually turning the motor over? Moving the piston?

Replace those clutches! But also clean the inside of the clutch bells where the rubber makes contact. I recently had the rear wheel not turning backwards issue and this cleared it up. My clutches were severely swollen from improper oil. I also learned that you can (at least temporarily) replace the four rubber grommets that hold the starter clutch engagement plate on with four zip ties. It has held up for ten miles of riding so far. Shimming for the gears on those engines is not super complicated. Gear teeth should line up flush with each other, without any offset. There are only a few washers in there. Has the bottom end been rebuilt by chance?

Thanks for the replies. Yes, the engine is turning over. The clutches installed are brand new and with the correct weight non-detergent oil. Shimming has been a little tricky, but the washer / part stack all appears to be correct and in the correct order. I will goof around with it some more, checking the clutch bell cleanliness and condition.

Other threads have mentioned a run-in period with new clutches, I tried this without luck. Also, the parts diagrams are kinda vague. Does anyone have a good or detailed diagram / video clips / picture series that shows the correct parts?? Thanks!

Keep us updated - I’m real curious about why the problem is.

Sometimes ya gotta go forward before you can go backwards.

Remove the starter clutch and put it back together. Tighten down and see if it frees up. You're checking to see if the binding is in that area of the crank/clutch. There are more...

I had similar issue, I bought new rubbers, but ended up not needing them because I found a small piece of rubber in there and cleaned it all up and it was fine after that. I read that you can soak the rubber pieces in mineral oil to bring them back down if their swelled at all.

I know you said you installed new clutch rubber, just offering some info on what helped me so not sure your having having similar issue. I also scoured and clean the surface of the bell where the clutch contacts just for extra measure.(edited)