The phenomenon of rust! Wtf. I've now cleaned out two step-thru mopeds. A 77' Sachs and a 80' puch. Both yielded different results about a year apart.

I bought the moped fully running and working. The tank was rusty but not full of rust. I went with the vinegar again and got a ton of rust and chunks of crap out. Then the thing flash rusted on me. Guess I dident get the premix in in time. Rode the moped fine for a couple of months and noticed it bogging down at times. Felt like rust was just building on the jets. Sure enough it was. Inspection of the tank after cleaning the carb and I noticed more rust.

I went with the muriatic acid this time and boy is that stuff nasty. Left it in overnight and then drained it out. Tank was spotless

Except for some chunks at the bottom

Of the tank. I worked fast and noticed some light rust begining to form. Got the premix in and I think I'm good. I'm going to let it sit for a few Hours and see what happens.

I live in NY, near the beach. Salt air is a bitch.

I guess I'm just wondering why one moped would be almost rust free well over a year since it was cleaned and the other moped would just not be as receptive to rust removal.

Thought this would be a good thread to share thoughts and ideas about the topic.

I've got a tank on a '84 NB50 Aero scoot that I've derusted using electrolysis three times now. Every time it's cleaned the rust comes back no matter what I do. It's never a heavy rust either, just enough to clog the idle jet and make the bike not want to run without babysitting the throttle. I've decided to clean it one more time and if it doesn't work I'm parting the bike out. I've gotten that disgusted with it.

Why not seal it with POR15?

Because I've decided not to spend another penny on the bike. It's a money pit.

> Because I've decided not to spend another penny on

Welcome to mopeds, amigo. A $5 inline fuel filter should handle a lot of your problems with clogging the jet.

Nope. Brand new filters didn't stop it at all. I've tried a metal screen as well as a paper filter. The third time around I put them in series and it still gummed up the idle. Oh well, it's a scoot so I'm not in love with it.

for 25 bucks you can buy a small can of Northern Industries Gas tank liner,

or RedKote. Take the time to line the tank and stop the clogging problem.

hey.. i dont really have any solutions for u.. but im looking for some parts for my 85 aero nb50 .. let me know if u decide to part out.. or f u know anyone else with a parts bike.. thx in advance.

In addition to a fuel filter you should loop your fuel line after the inline filter. The loop will trap the tiny rust particles that go through the filter because they will not be able to push up through the loop. You will be able to see this build up at the bottom of the loop and you can easily flush it out when it starts to accumulate too much just by pulling the line off the carb and running fuel through for a second. Just try it and see if it works. This is an old trick from before $2 inline filters we available everywhere. 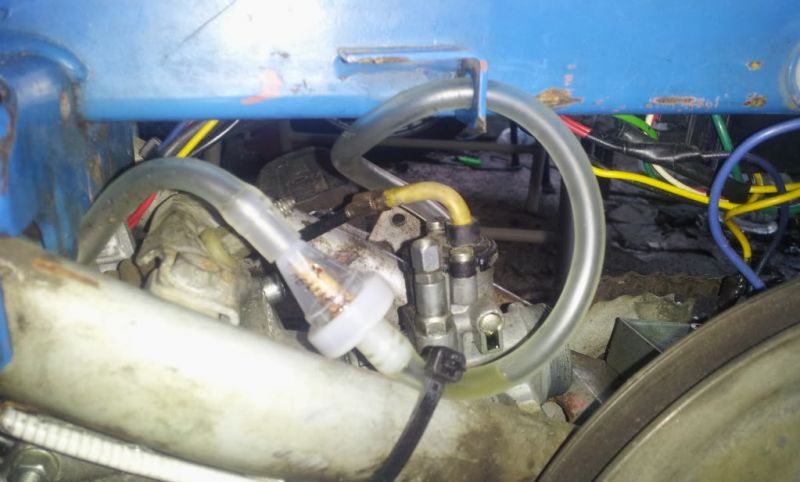 After rust is removed seal your tank and always keep it full.

I don't believe in tank sealers. Do and acid wash, use an inline filter and loop the fuel line. DONE.