I assume I take that big nut off, remove the bearing and something will become apparent (see attached photo). Does that groove cut in the nut mean it has left hand threads?

You're correct in guessing that's the way to get into it. Mine's a spoke wheel, but it's probably similar. That big nut should have been part of the bicycle freewheel. If I remember correctly, it's about a 36mm? Take your wheel to a bicycle shop for a replacement bmx freewheel, and buy the matching tool to remove it for next time... Once that is removed, that bearing plate will come off easily, the gearbox will come out of the drum and look almost like this. Except your gears won't be spilled out to dry like in the pic. I'm kinda surprised that one single brake shoe can be effective at all inside of a drum brake! Take some gritty sandpaper and scuff that braking surface up, it'll have a glazed coating on it. Also, scuff up the inside of the drum's metal surface, it'll probably have some rust on it. 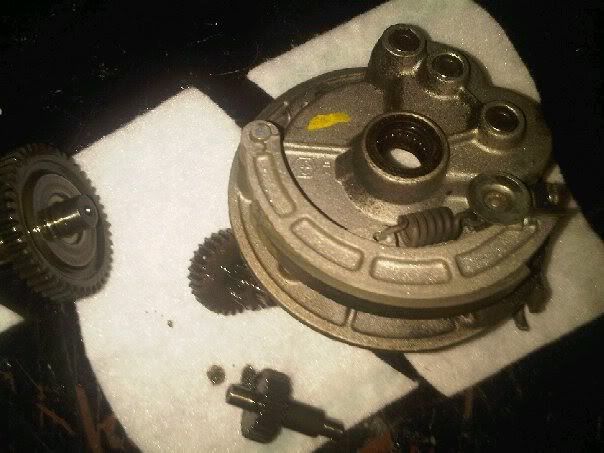 if you open the gearbox side, it will look like this. Pay attention how each gear fits into it's hole and aligns with each other, and also where each washer shim goes. And the spring on the main cog. Notice how that main gear's disengagement works. This is a PERFECT time to drain out that 30 year old crap and replace it. I used synthetic SAE 80W/90 and will probably never have to touch it again. Unless it leaks someday. I'd put some of that in and give it a few hours or a day to see if it's going to leak. If that inner seal leaks, it could coat your brakes and give a pretty bad ending to your day. I was lucky that my seal was good and the outer gasket came off in one piece and was worth reusing... with the gearbox in it's correct mounted position, on or off the bike, fill only up to the fill plug hole. This really isn't a difficult project, and you'll be happy that it's all inspected and like new again. 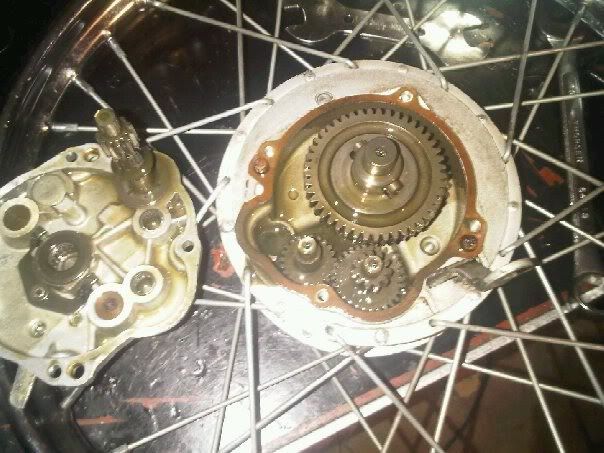 forgot to mention, it's not left hand threaded, or else it would unscrew when you pedal.

Thanks That is what I needed to know. I'll just crnak on it counterclockwise a little harder.

I already have the transmission apart. broken gear

I hate to be having to be spoon fed all this but I am afraid of breaking something. In the attached picture you can see I have the nut and the bearing off the axle. Is the wheel just press fit on the axle? I whacked it a couple of times wit a block of wood and it didn't budge.