Measurement of the rim proves it's 19", though tire markings say 23" I'll check to see if 2.25 will clear the rim. If so, maybe I can snag some rinkys! You're talking about the whitewalls marked 23" right? I wonder what the speed rating is on those. They do look high quality. Have you ever done business with the guy? I mean, if he's the only guy with the tires, then I know what I've got to do, but I'm just curious to know what I'm in for.

Rinky Toys have 2.25's both black, and whitewall versions.

Motorwest has only black, but are 2 instead of 2.25

I'm sure the speed rating's fine either way.

Rinke's a good guy, but I've never ordered from him yet. I will be this winter.

Two regular blackies from Motor West are about $36 (I think).

The main problem with Rinky Toys is that he doesn't deal with credit cards or paypal, and it'll cost me $20 to get a check to clear for him. No big deal if my order is worth it. His motor parts, etc. are cheaper than Motor West's and he has abouit anything for my old allstates I could ever need. Motor west is more limited.

Rinke might take a little bit to reply emails, but always has, and is very friendly. Did ya see that picture of his place?

My original tires were never whitewalls.

They did sell them that way in Europe, but not here.

The ones I have on it now are from motorwest and read:

then it says below it:

I've worn my back tire out this summer, and it was brand new in May.

I burn'em off all the time though, and I know I've been over 50km/hour many times without any problem.

I was thinking Rinke's were 4-ply maybe. I can't remember. I want whitewalls real bad, but I'll see what I can afford when it comes time to order. I need to get more tires, but I also need to order a bunch of other stuff if I want any more allstates to go for me. I want some just sitting there for a friend to borrow when I feel generous.

You can always get that white roofing paint and make your own whitewalls. I'll probably try doing it eventually, but it would be nice to havesome real good ones from Rinke someday for my red and cream bike.

You cant put a variator on that bike, the engine is rigid mounted to the frame. You would need to mount a whole 103 swingarm/subframe.

You could try a 102 crank and clutch, which would make parts easier to come by, but i've already suggested that.

Re: Tires, and tubes

When I ordered tires _and_ tubes, Motor West sent me inserts for free.

Even if they don't do that, make sure ya get the inserts!

I'd order the inserts and the tubes from Motor West, 'cause they'd work for either tire you decide on, and I'd bet they'd be a little cheaper.

I've never had a flat yet, anfd I ride over all sorts of stupid crap!

I think you're right Bret!

Yeah, I know I'm going to have to manufacture something to use the swingarm so I can make the variator strut it's stuff. That's the beauty of having access to a good welder and knowing that I'm just going to repaint the thing anyway. Any suggestions fellas?

Rinky's peds give me shivers! Lordy are they amazing. Why don't we have shops like that here? Geez.

Deezy--do you think it would do us any good to combine an order? Or wouldn't it be too economical when all's said and done. If I figure out that the 2.25 are going to fit without rubbing, I'm definitely getting some when the cash flow allows. I definitely prefer the 4-ply and inserts so I can run over stupid crap at high speeds.

Bret--I know I'm going about it the hard way, but I think the end result is going to justify the tortuous and drawn-out means.

Well, you live on one end of the US and I the other.

When I get ready, and my brother also, I will check with ya though. Maybe it'll work.

About the only thing you'll be wanting would be a set of tires, right?

Yeah, I'll let ya know. If ya get antsy, email me.

I know--the fact that we're separated by the span of the US was why I posed it as an iffy sort of thing. But anyway, if we paid with one check that would cut a little off--and maybe we could shave a little more off on shipping if we sent it to the place with least cost and then used DSL to get it to the second party. Just an idea. I'll let you know if I'm getting an itchy wallet.

The only thing I'm aware of that he'd have for me are tires, so that's what I want. Whitewalls!!

Yep, that's what I was thinkin' too.

We'll just keep in touch then.

Either you get ahold of me or the other way around.

It might be a month or better....? But I need to make an order for the winter.

I bet he has others, as I had to personally ask him about the whitewalls.

I'll let you do that since you know more about your bike. He has alot more than what he lists.

Maybe let me know what he says. I'm kinda interested.

Unless you really want me to ask. I will if you want me to bad enough.

I feel slightly weird asking him so many things, and still not placing an order, but that's prob'ly just me.

Hey becky, I can get 19x2 1/4 whitewalls from one of my distibutors in austria for 34 euros a tire, and they take Credit cards and have online ordering, plus I have a dealer account with them. their shipping usually gets stuff to me in about 2 weeks. 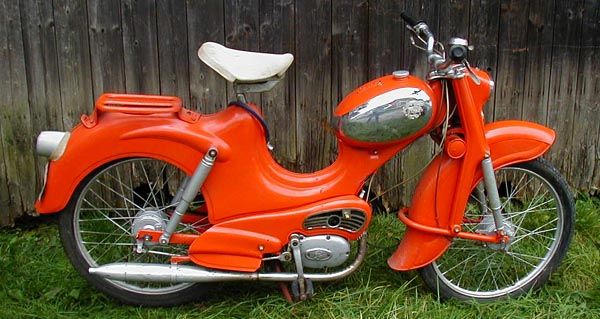 Yey! Dealer account! I think that's my better option, especially if you know they've got 19 x 2.25. Chad--I'll call you later today. I started to yesterday but then I realized it was before 5:00, which wouldn't work out so well for you. So after class tonight--early evening I'll try to get in touch with you.

Deezy--I know what you mean about asking without buying. It makes me feel funny, too. Order that winter package! Those nonfunctional Allstates are calling your name.

You can call me after 3pm, I am going to an Alice cooper concert tonight as a favor to someone, so I might not be available this evening, feel free to give a try though still.

Also Deezy, I can order allstate parts from the same distributor if you need anything, they are cheaper than motorwest and have a wider selection.

You should share the information, and let me know who they are.

I know they'd prob'ly be cheaper than motor west, but what about Rinky Toys?

I'd love to look at their stuff! I've searched for so many years now! What brand of tires are they?

According to my catalogue, looks as though they are continentals.

That's what Rinke's got too.

Makes me kinda wonder, 'cause I could sware they were that size when I was lookin' at them before.

I still want to know where it is you shop there!

Or are ya gonna start a business here, dealing with them?

That'd be cool, and I would support it, but if not, I'd hate to chase you down on piddly stuff whenever I think of it or need it.

Seeing what's available, I can make a solid fuller order, and make it worth everyone's while.

I thought everything Puch in Austria had been moved or sold out, and was mainly in Sweden, and The Netherlands now.

If ya don't want to tell me, then say so.

By the way, what's a ballpark figure on a pair of those whitewalls shipped? I still want some. I know that if Rinky Toys only has the 2.50's, that they'll still easily clear on my bikes.

The taller the tire, the better they take the gravel around here. My brother's got brand new 2.25's on his, and I can't corner anything like him. I remember my old ones while they were on there, and they handled alot better than these 2.00's I have now.

Hello Deezy, I have my dealers license, and I am in the process of starting a shop. So for the time being I am being discreet about releasing information that I have search diligently to obtain. I should be able to get a catalog or parts list available in the next few months. I am not rushing things though, as I want to do things right and not hastily. hope you understand, and if you compile a list of parts I could see what is availble.

You should email me with an email address that I can get ahold of you with.

I'll be in need soon.

Congrats for being voted a new branch!!!

I may be able to get you some NOS tires...email me the sizes and Ill search the warehouse 1 day next week.......I promised a member here a set of 17/2.50 wide whites anyway..... so I need to go dig through the spiders and pigeon shit again soon and see what I can dig up....Im in Delaware too so the shipping wouldnt be bad to Pittsburgh....I think he charges 25 a tire