I'm fixing up a Qjiang scooter for a friend. It's a Qj50qt-2. Never heard of it before. Basically, she let it sit for months and it didn't work afterward. Initially, she let it sit because the battery ran out and procrastinated replacing it. It sat for about 7 months. Seems like an easy problem.

I checked the spark. It's good and I got it to run on starter fluid. So I figured the problem was with the carb. I took that off, cleaned it, and tuned it. The thing's clean as a whistle. Still doesn't run. Now, I figure the problem is with the gas line from the tank to the carb.

Most of my experience is with mopeds and not scooters, so I don't know anything about the gas lines. When I started looking at the bike, I tried to drain the gas by taking the gas tube off the carb. Nothing came out, so sucked on the tube and could only get a mouthful of gas. We ended up syphoning it out the top. That the gas wasn't flowing through the line disconcerted me a little, but I figured this had to be something that scooters did. Now I think that the problem is isolated in the gas line.

There are seperate gas and oil tanks and lines. A large tube, about .75 inch runs from the gas tank to a sort of node about an inch away. This node has a metal fastening on it, which has two tubes coming from it. One is the gas line and goes to the carb, next to the throttle. The other tube begins further from the gas tank, at the end of the fastening, and runs to a connection with the carb immediately before the entrance to the cylinder. I feel that the problem may be occuring here.

My question is: in a scooter, should the gas flow through the line when it is disconnected from the carb? Next, are there any switches that control the flow that I may be unaware of? Finally, what should I do to fix the bike?

"THESE GUYS":http://mopedworld.com/MopedWorld.htm claim to have parts for that scooter. I'd call and see if a service or owner's manual is available.

It sounds like that carb includes something like vacuum operation or vacuum assisted starting, or the carb has a primer function to get things going and keep things flowing.. or somethin.. i dunno.

Try www.scooterbbs.com for scooter discussions.. they are far more likely to know what's going on and to advise you. 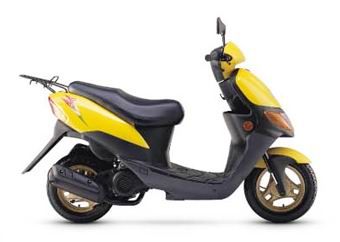 alot of new scooters like that have vaccum operated fuel petcocks, and normaly they have a prime selection as well, to let fuel flow when it's not running, however alot of chinese scooters are made to be disposeable (parts are not alwas avalible), I would take the fuel line off again, and try sucking on the black rubber lines that are not fuel lines, and see if fuel starts coming out with one of them, I suspect that the vacum petcock is stuck off, and that you need a stronger vacum then the engine produces while slowly turning over to start, to unstick it.

It also clogs the following:

You have alot of cleaning to do.