I'm looking to either buy or trade/partial trade my E50 bottom end for a Z50 or ZA50 bottom end. I know those manual Z's are hard to get, but damnit if I wouldn't kill to have one. I'd settle for a ZA, but I just can't deal with having only 1 speed anymore. E50's aren't for big people. I'm a big people.

The engine was rebuilt about 600 miles ago by the guy I bought it from, an MA member. It's one of the fancy older ones with the crankcase drain bolt in case ya flood it!

New seals, new bearings at the time it was built, and it's got the treats super stuffy race crank in it. The crank has about 600 miles on it, like the rest of the engine. Hasn't seen anything above 9.8k RPM.

Clutch setup is this treats 3 shoe clutch, the untapped version, with this 3 shoe brace. It has about 130 miles on it.

Ignition is points, has the puch/puegot ignition/hi-ten combo internal coil. It was replaced around 100 miles ago, a little after the clutch, I believe. Light coil is this 2 wire 12v coil. Points were replaced 200 miles ago with these.

Case transfers are dremeled for a mild match to the K-Star 70 piston port kit. Didn't go down far and still stuff left to dremel to your desires.

Cons: The drain screw stripped the threading, but I sealed it up with a ton of RTV and it hasn't leaked for about 100 miles. When it did leak, it leaked a little when you'd park it, and I topped off about 1/2 an ounce or so every 2 days. Doesn't leak anymore though so no worries there.

One of the cylinder studs has been backing out a little? I can't figure out exactly what's going on with it, I might end up tapping it out to 7mm, I have all the parts to do it if you want to do it yourself. It still runs though, just with less than ideal torque on one of the studs.

This thing has been my daily driver for about 5 months. When I got it ran about 2 days out of every week, and I learned a lot on it. It's now pretty spirippely zipiddepedlpy reliable. It got through the Get Lost rally without a hitch, and did it with a totally broken shoe clutch.

I can throw that in too, I have a stock 2 shoe with blue springs, but the clutch material pads are completely separate from the arms, so you're going to have to cork some new material on there or buy new clutch arms. It's technically possible to run it as is, as I did for several months, but it grabs super early. 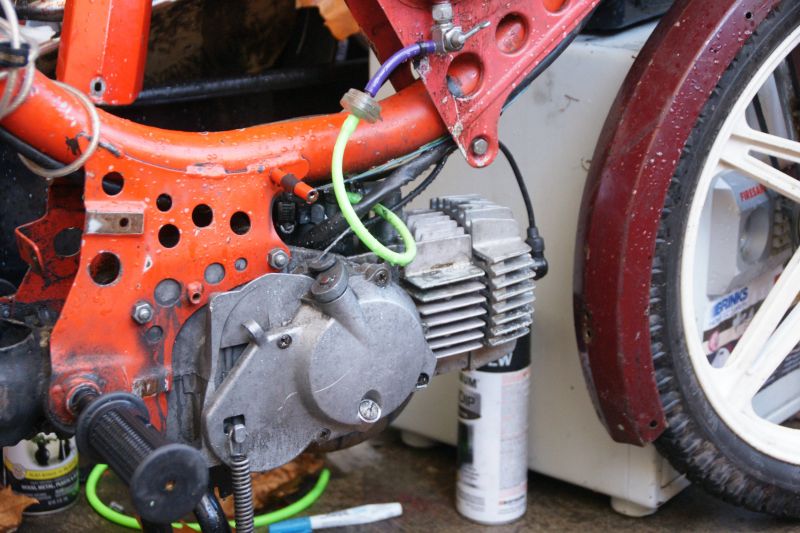 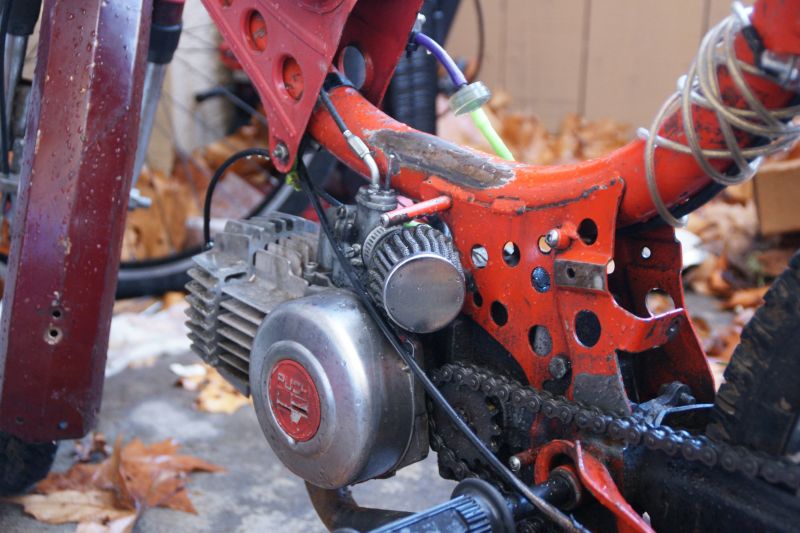 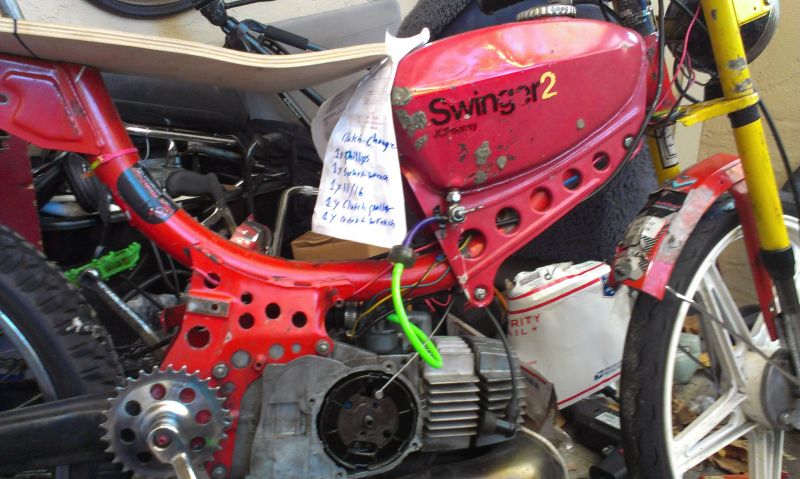 I don't think you actually want a z50. I've got one sitting on the shelf with a New shifter and perfectly sized cable for stock bars. I was riding it for a few months, but it's been ripped on with big boys kits and could use some lovin. It needs a new crank and a fucked cylinder stud thread fixed. New bearings might be a good idea, but that's where shit gets weird with the two piece bearings. I dont have the extra funds to play with it right now, which is a bummer because it's a pretty sweet engine once you get inside. (edited)

> one sitting on the shelf with a New shifter and

> perfectly sized cable for stock bars. I was riding

> it for a few months, but it's been ripped on with

> big boys kits and could use some lovin. It needs a

> New bearings might be a good idea, but that's

> where shit gets weird with the two piece bearings.

> I dont have the extra funds to play with it right

> now, which is a bummer because it's a pretty sweet

> engine once you get inside.

Agreed it's a great engine but since it's a left-hand manual shift you have to rig up a foot rear brake.

I have a z50, za50s and 50s and it's not the engine bottom it's the cylinder that gives you the power. I have a Polini e50 bike that would haul your 300 pounds or whatever easily so it can be done keep your E50 and run a big boy kit like Gila, euro kit, metra 80 parmakit or polini

Your WT will wear out a two speed clutches more than a e50 anyway.

just get a eurokit and rip all day

actually just get a hobbit (edited)

> just get a eurokit and rip all day

> actually just get a hobbit

Thanks guys. I've been talking to Ken and I think I might just end up keeping the E50 after all and build it up to rip, maybe. I would still LOVE a Z50 though, and would totes trade for one. I've just always had this dream, and the dream involved manually shifted gears on this ped.

Daniel, I know 77 sells a crank for the Z50, and I could just tap out a new thread for the cylinder, but screwing around with the hard to find bearings is kinda scary.

If anyone wants to offer up a ZA let me know. I'm kinda in the middle.

I have a ZA 2sp bottom end in the basement right now. Flipped clutches, etc. It was making an odd clanking noise and probably needs bearings. Will do a partial or full trade unless there are other goodies you need? I have some spare cylinders around, things like that.

Aaaarrrrggg nope. i wan 2 speed. i want to live the glorious life of shifting gears. gears are fun.