I'm looking for a project magnum. Something that runs and is in safe driving condition preferred. No rust buckets, so to speak.

I've been hunting on CL to no avail.

I can offer a reasonable price in cash, or combinaton of cash and a southwest airlines flight (paid in my points and the equivalent flight cost subtracted from your price). (edited)

> I'm looking for a project magnum. Something that

> runs and is in safe driving condition preferred.

> No rust buckets, so to speak.

> I've been hunting on CL to no avail.

> I can offer a reasonable price in cash, or

> combinaton of cash and a southwest airlines flight

> (paid in my points and the equivalent flight cost

> subtracted from your price).

A Project is basically a frame maybe with a seat or tank maybe a couple other parts like seized engine but not a running bike in any sense of form.

You'll have to forgive my ignorance here. It appears as though I experienced a complete lapse in judgement when choosing appropriate terminology to describe what I was looking for.

I would love a running moped. In the car world, what I described above would be called a "rolling restoration candidate" - something 5hat could be driven while cosmetics and some mechanical issues were sorted out, but still overall functional.

So, if we're getting caught up in semantics and subjective terminology, then I'm looking for: a running puch moped magnum that might need some cosmetic work, or even some mechanical work to be a daily ridden moped, but is otherwise in reasonable condition.

oh man. daily ridden and moped should never be in the same sentence. you realize you're looking at 1k+ for a running magdumb

You guys sure like to dissuade new moped owners, don't you?

If I wanted my words dissected, and then told what I really wanted and how much it was going to cost, I'd go talk to my wife about what a new "practical" car for us would be.

Really. Does anybody here have some thing to sell?

Ken roff has or had an amazing magnum for sale but he is in the Midwest. If your heart is set on one load up the ole station wagon and go out there. There was a puch but not a magnum listed recently that was so so beautiful. I definitely wouldn't have been able to resist if I wasn't going on a long vacation.

If you are actually seeking a daily rider to haul around the gigantic highspeed raceways of San Jose maybe get into vintage tanks or something like that. It's one thing to have it as a passion but you are in such a car culture that to have to use it as a daily driver maybe isn't the greatest idea. People are just so inconsiderate behind a wheel. If for some reason you have some sweet little five mile ride to some quiet street in Los gatos then find a variated ride. They climb hills better for the most part. If you have actually never ridden a moped and you actually have a motorcycle license and want the experience pm me and come up to davis for a ride

reading between the lines that you want a Magnum, but don't want to pay Bay prices (ex: you want to pay less for it not being fully restored [this is 99% of them])

can't really blame you, but... (and non bay folks will hate this) the truth of the matter is running Magnums offered within an hour's drive of here for $900-2k+ disappear from CL somewhere between minutes and (worst case) a few days of being posted... this is why you've been searching to no avail. you can find deals occasionally, but you have to constantly hunt or drive far or get lucky (or a combination thereof).

If you can't swing that but are totally foaming, for the right price I'd maybe sell you one of my 'all there' 'projects' that I'm mid-way on.... but this is not a pushy sell on my end ---> I don't need the money + like working on these/the project is easy + would rather have fun completing it myself & selling it for silly bay area money after i get it going in a few weeks (my weekly wrench time is pretty limited at the moment), than take a big loss as charity... so if 'will run' is not close enough to your definition of restorable bike, totally cool - just thought this might be the closest you'd get to your wish and i don't need 6 of these things

it would be the red guy in the back there (the only picture i have on my phone, sorry) 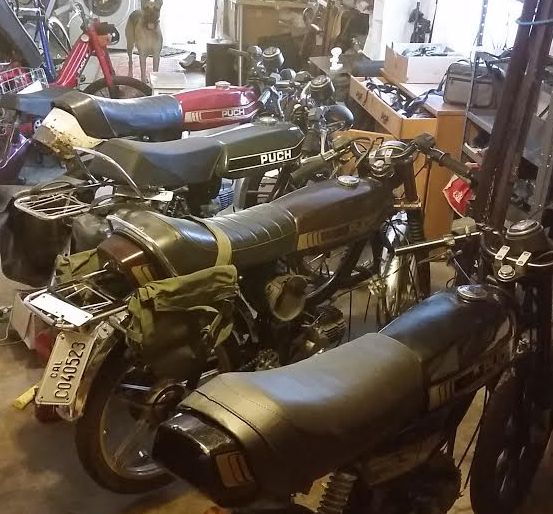 * a stock e50 with decent compression

* black snowflakes (canned not powdered. i was going to powder)

* cracky ratty tires that i was going to replace with MC11s

* a nice powdered tank that had had a pinhole (visually it's covered by the seat) that is currently only jbweld-ed [[typo edited]]. works but i was going to braze before selling

* whatever pipe i have laying around that i wasn't going to use... stock jawns or maybe a rusty techno circuit

here is a closer pic of tank post powder/decaling

Steven now I can buy more mopeds and feel ok. Love your collection

thanks haha... well I feel 'ok' about it (they all have been cheap minus the mocha which i shipped over), however the wife is a little less enthused (honestly it's pretty lame of me to take up the whole garage with peds) so thinning the heard is always nice

Thanks for the insightful recent posts, that's really what I was hoping to get out of this.

I didn't literally mean to ride a moped daily. However, my commute is less than 2 miles. Mostly downhill on the way there, and the opposite on the way home. I figured on days that I'm not carrying much, I can save a couple pennies on gas while putting a smile on my face as I cruise to work.

:) i did that today on my free spirit to my casual carpool stop.... made it halfway before running out of gas (total idiot when i'm tired). my smile turned upside down pretty quickly pedaling + running that dude back up our huge hills back home

Never give i, a garage is a man cave! You need it to be on your game.

> my commute is less than 2 miles. Mostly

> downhill on the way there, and the opposite on the

> > downhill on the way there, and the opposite on

Only because I'm not old enough to tell young kids stories of hardships that included riding to work in the brutal California sun, uphill; both ways. ;-)

Get a running pinto/kromag/freespirit. buy a mag tank for 100-200 bucks and weld your own tank on. cheapest way to have the magnum look but not actually be a magnum.

Was it Abe Lincoln or George Washington who pushed his moped barefooted through the snow??

or just get a maxi. they are way more fun than magnums