I had one of the types that takes actual bulbs opposed to the sealed beam style, but it suffered an awful fate when I drove away in my van with my moped on the roof.

Looking for a replacement. Let me know!

Treatland has what you want.

we want to hear more details of this:

I'm pretty sure Treats does not have what I'm looking for. This is what Treats has:

That is a sealed beam in that the bulb is permanently soldered in to place inside the glass lens. The one I have has a removable bulb which is held in by a little clip. I'll snap a picture in a little bit.

Metal Ponies rally. I got about an hour sleep Friday night because of schenanigans and thus was a bit edgy Saturday. My moped had already been hoisted in to a tree Saturday morning, while I was cooking everyone there breakfast. My van was borrowed at one point to pick up some supplies and the people decided it would be a good idea to commit a felony, stealing something from a parking lot with it (seems like they may have gotten away with it). I caught people trying to remove one of the wheels of my van... All excusable stuff in the name of rally madness, but my lack of sleep limited my sense of humor about it all at the time.

I passed out nearly black-out drunk at some point and woke up (sleeping in the van) at 3:00 AM Sunday morning to my moped being hoisted on to the roof and glow sticks being thrown at the walls. I was still ripshit drunk and just wanted to sleep, so I got out, looked at the moped on the roof and decided in that state of mind that it was a wise idea to get in, start up the van, and jam on the gas. I drove a couple hundred feet down the street and pulled in to a dirt road and slept there.

Amazingly all that broke was the headlight. Bad decision, but I stand behind it!

If you have a sealed beam that has a burnt out bulb Ill convert it for ya.

I've tried that and sucked at it. Probably using the wrong tooling. I may give that a try and employ your assistance, but having the actual right part is so much nicer.

dratv.com its the one that fits another bike, sorry, not sure which model

I'll check that out.

Here's what I'm looking for. I may attempt to repair it, but I would rather find a good condition one. 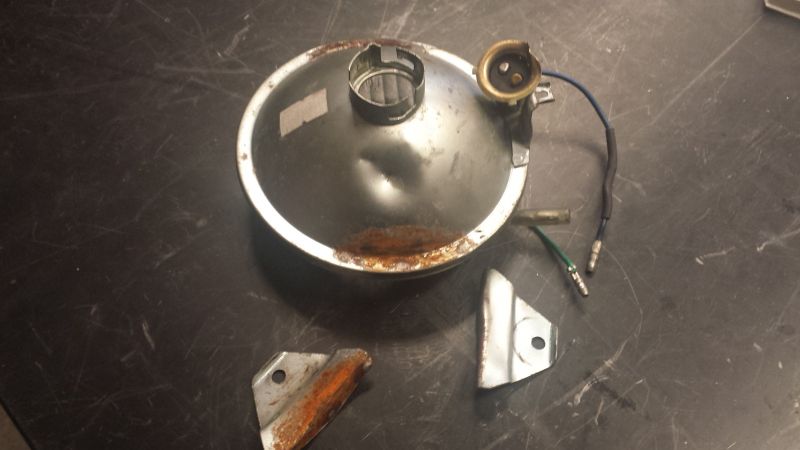