I have a Garelli up for grabs! it was the 20mph radial cylinder that I ported porting thread anyhow that got it into the low 30's. Next I added a pipe, opened the carb up to 14mm on the 12mm side and re-geared to 11x31, now she gets to about 40 with decent bottom end.

So that was the good part, here is the bad part, the carb leaks out of the banjo, the gasket is gone, easy fix but I havent done it. There was also a pin hole in the tank, not from rust though, the original owner had drilled it for some reason? Whatever I creamed the tank, problem solved. The headlight ears were also knocked off at some point and welded back on (not by me) the welds arent that great but they are holding.

Otherwise everything works, headlight taillight everything, she starts easy and runs strong 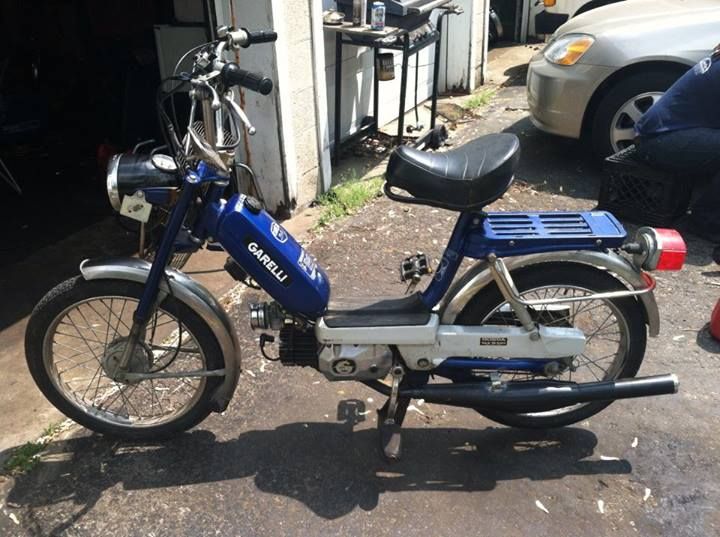 So I'd like to either sell this thing (make me an offer) or trade it (trade+cash) I need Hobbit stuff, pretty much anything go fast besides a pipe, I already have a Proma

-a head light and taillight would be nice as well (edited)

He must be talkin to Jake Miller...Oh wait Jake don't miss JACK!

I've got a set of puch skinny spokes with tires/tubes. Also have a shitton of hobbit stuff still. Have a 19mm phbg pull choke too. Interested in PR derbi stuff, MLM hobbit peoples pipe, or cash monies!

Looking for a RUNNING solid garelli noi that I can bolt up and go on. Will trade an a35 needing a rebuild and ignition or cash

Will also sell said a35 outright

For more i can leave it on the 94 light blue frame it's on, missing headlight, volt regulator and shocks. Has wheels on it

have a za50 Ducati Cdi with an extra box. This is practically new but wasn't working well for me, needs ignition coil rewound I think, solid lighting coil.

Have a red ciao circle post frame. No forks, seat or petcock

have a new (less than 4 miles) moby stock variator

Make an offer or request pics if interested in anything. As long as its reasonable, I'll bite, I'm sure.

I have some derbi pr and pp top ends.

I pmed you Kevin.

My puch wheel set is spoken for!

Also have a hobbit rear trans/pulley set available for the right price.

Ill be bringing a 74 ciao parts bike, also a columbia commuter frame if it will fit in my truck

and yes, i'm going to wizbiz in case that wasn't obvious enough by me posting earlier

Rick I'm not going to wiz biz but I may be a buyer on that hillbilly.

Ill be bringing a conplete ciao bottom end, spins free and had spark. 12 pin i beleive. I will double.check.if anyone is interestrd

Includes a spare set of cases

Looking for 4 bills - I'd love to sell for less, but I'm trying to buy a tig rig. I bought nicks 3 speed for 5bills, but it ended up needing a ton a shit - so nobody bring that up. This thing is fresh built and ready to go.

Grab the frame and shit too for an extra $50.

I got one of those paypal card readers so paypal, cash or card. Not looking for trades. 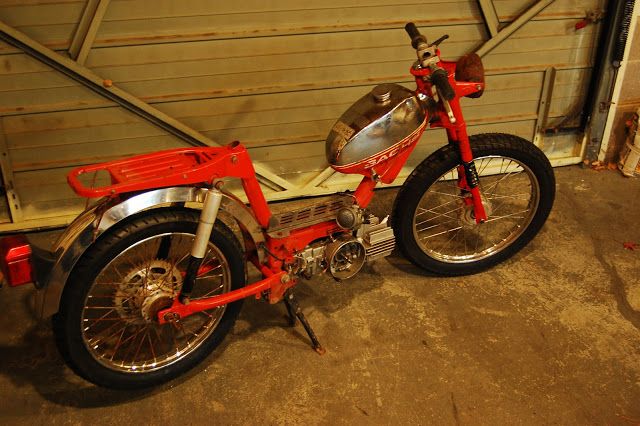 do you think someone would trade a decent and running pug or newer tomos "nice and needing nothing" for a v1lh trike on sachs prima frame with techno pipe runs but don't ride needs finished remount exhaust tune carb/check for air leaks and a drive chain will come with a carabela engine v1 engine and 51cc fan delete kit without piston?? its nice and would keep it but takes up a lot of my space ive done more work to it since the pics all the controls and wires are ran fit the pipe new reeds 14;12 sha starts right up!

pic of the prima w/v1 carabela b4 teardown

> also the trike has a uber rare limited slip rear

anyone have an av7 crank and a novi nut?

Also have a stock bore honda C70/CT70 cylinder that has been honed with a ball hone and has brand new rings as well as a parts motor from the 1980's if anyone needs anything... Cylinder is perfect, piston has a scuff here and there but is in great condition.