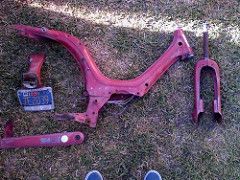 Eric- my paypal dispute with you has now been escalated to a Claim.

ALL- sent Eric $75 for PC50 parts and shipping 6 weeks ago. Excuses and apologies but no parts and now no response to my paypal dispute. Best part of the story is I already bought and paid for the same parts when knucklehead Shannon sold this bike on ebay last Dec. I was told after I WON on ebay that some of the parts I wanted were already promised to someone else! Then this summer I find that Shannon 'gave' said parts to Eric. So stoopid me sends more $$ to buy them AGAIN (after the above ebay auction ended with no bidders). Was happy to do it too until they didn't show in the mail.

Anyone know what's up with Eric?

Bumping this as it goes along with my current thread re: deadbeat seller Eric Harris. Not only does it include some additional background information regarding the parts that I omitted from my other thread, but it shows that I bitched on here in late SEPTEMBER hoping that it would encourage Eric to get my stuff shipped or send a refund. So that's the rest of the story with the parts I paid him for. I agreed with Eric before I sent him any money that he wasn't responsible for anything Shannon did or didn't do. The only issue right now is that I paid him for parts on Aug 14 and have received NOTHING but empty promises and eventually no responses after repeated polite requests for my parts.

It's not like I just suddenly started a thread accusing him of scamming me without having made other attempts to get this transaction completed properly.

link to other thread