I acquired this moped recently after somebody saw my motorized bicycle that I recently built. I don't know a ton about mopeds, but apparently the wheels on this are highly sought after. They don't do that much for me. So, I was thinking, if anybody wants to trade a less "cool" but functioning moped for this non functioning parts/project moped that would be cool. I like the looks of this, but I could go for another puch, honda, suzuki, something like that, but i'd prefer it to have the bicycle style frame rather than the step through ones with like a plastic fairing, etc. actually, all trades considered, though. 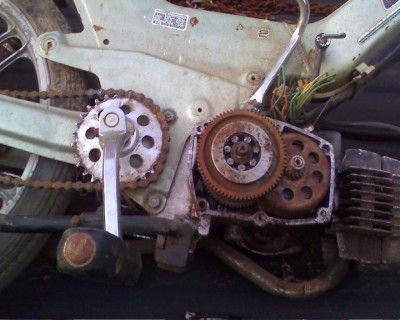 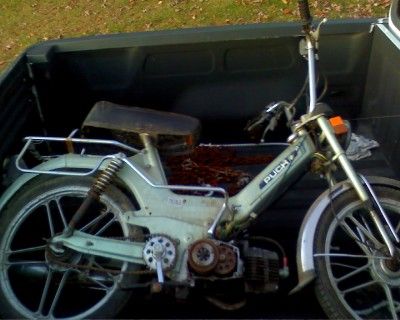 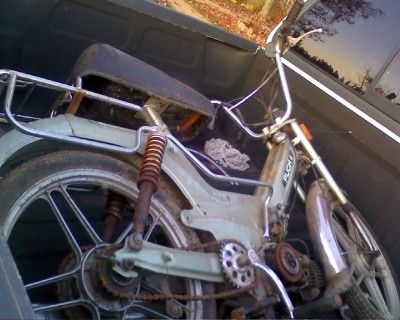 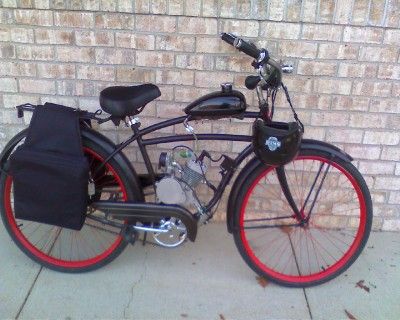 Get ready to get bombarded with offers!

those za trannys are finicky, from what i hear. if thats been chillin with no cover for a while god knows what could be goin on in there.

sweet bike otherwise though, some valuable stuff on there.

Dibs! i'll trade you some stuff.

wow. ok. I'm still interested in trading for another functional moped. Would prefer to not mess around with shipping stuff. But, we'll see.

I was just informed that these wheels routinely go for $300+ on ebay. holy cow.

still interested... sent you an email. let me know what's up.

if you want decide to part, or sell the bike let me no. I would take the motor and frame off of your hands

thats a 150 dollar set of 5 stars in that condition.

Ill give it to ya too

how are those $150 5 stars? THey are complete and not rusty. I'd say they are worth at least 250 and shipping, at least based on what I've seen.

Hold out dude! You've got a sweet bike.

wow I have no interest, but there are a lot of douche bags fucking up the market in here.

yea, the last ones that went for $300 on ebay were NOS. i'm definitely interested in these wheels, but i agree with the comment about people messing up the market.

alright, guys, I don't know much about them, that is just what I was told. I've gotten an offer to trade for a running moped. I dig it, any other offers? I'm not like money grubbing, i'm just trying to get another moped.

250 shipping for pitted alum 5 stars that you would pay to ship?

Im sure someone might to it, but note that my quote came with an OFFER

If your willing to say they are worth that, are you willing to pay that?

The moped market aint what it was 6 months ago, and there is no bailout plan.

If your gonna appraise them you should offer to buy em.

why would I buy 5-stars? They are overpriced (typically) and offer you nothing spokes can't. I'm just going on what I've observed on ebay and locally. People pay big money for 5-stars. I don't, but whatever.

Ignore my comments if you wish. The seller should know the value of what he has. Call me rude or whatever, but this is supposed to be a community where we help one another out. Yes you might pay more with the sellers knowledge, but that seller won't feel ripped and may become more excited with mopeds.

So yea, whatever. They guy wants a running moped. He never offered to part the bike out.

ok could you guys take this somewhere else? Still available for trades ;) I just want to get a lesser cool running moped.

can you shoot me an email with pics?

ew no way 300 for those wheels. especially not in that condition. i can get mint 5 stars custom powder coated for under 300..

I tentatively have a trade in progress for this weekend. thanks everybody. I'm excited to moped.

looks like the moped trade may be falling through...