I'm getting one running for a friend and it's a bitch right now.

It’s a Honda does it have spark?

My CL 70 issue ended up being the condenser, so cheap, worth ruling out.

And I’ve got a ‘72 CT90 in my sights, just gotta come up with a disposable 1K. So cool tho, definitely on my list of things to own.

Did a second deep clean on the carb, still won't idle without a little choke but I got to ride it around without brakes in the backyard. I swear it would climb a wall if I asked it to, billy goat vibes.

We have one with an atc 125 engine, there a blast.

I had one with compression, spark, and clean fuel system and that bastard would not run unless you had a good battery on it. My advice, make sure to always have a good, charged battery.

With that being said I was never a fan of the style. I got mine in a trade and sold it off a few weeks later. Im not hating, just not my style. Best of luck with her!

I scored two from a swap meet years ago. Both engines frozen, but mostly complete.

Valves were stuck, beat on them with a plastic mallet till they moved, and they both ran.

I remember one wouldn't start and I wore my leg out trying to kick it over.

My buddy pushed me up and down the street till it fired up, and after that, it'd start on the first kick.

Sold them both for a huge profit about ten years ago, and I know one of them is still running, with almost no maintenance.

god i love those so much, that's all i want

It's growing on me for sure. New grips and a new carb came in the mail today so shit is about to get real.

The battery situation is bullshit though. Even with a new battery and rectifier the battery will get too low to start if the lights are left on for a minute

Dare I say it... The bikes kinda captures the moped spirit.

once sorted out they go forever.

Great bikes, for sure need a good battery 100%! before mopeds I had a choice, in middle school I made a trade with one of my teachers for a clean trail 110. I could of got a Peugeot 103 instead but I decided I wanted that trail bike since I had a trail 90 I was working on and liked the Honda more. I rode that thing all over the place, amazing fun lil toy! Miss that thing so I recently got a project trail 90 again. $600 and a some parts and time and she is running great! Sat in a barn for 30 years with 900 miles. Got a battery and it fired right up.

The battery comments are not lying lol. I have 2 cm91s which are the street bois for this era and they are the best. Really the trails are probably much better because my only gripe with the CM91 is the doofy front forks. So cool looking but they really super suck.

but kept this one.

I like the doofy forks on my cm91. I wish it was a 4 speed though. Such a big gaping hole between 2nd and 3rd. Sucks on hills. You have to lose a lot of speed before going back to 2nd gear.

The owners manual suggests pulling out in 2nd, rhen shifting to 3rd, and 1st is mainly used to pull out when you have a passenger.

I have a project CT90 but no title for it. I’ve thought about getting the ct90 motor running and putting it on the cm91 and then i’d have 4 gears, but the cam bore is baked in the head.

yea those leading links are pretty awful. mine developed a weird surge cuz the braking would lift the shocks and briefly kinda loose tension on the brake cable. still, they are pretty cool lookin.

I started my moped adventure with a c100. I'd had a few mopeds before, a tomos and a maxi as a kid, and I had a scooter too (zuma clone) but the one I really started working on and riding with the crew that later became the swoops, was my c100 cub. over the next 8 years or so I put over 20,000 miles on it, including some long 250mi+ days 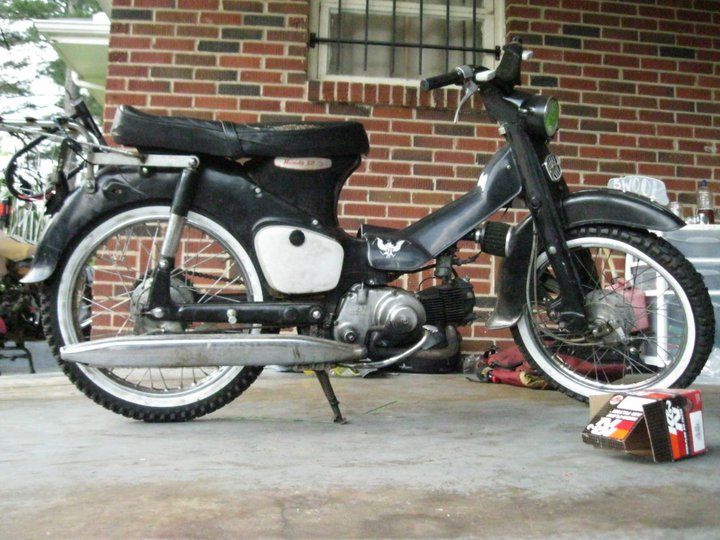 I also had an s90, it was the first motorcycle with gears I ever rebuilt.

I wound up with a friend's lifan swapped c102 with s90 tank, 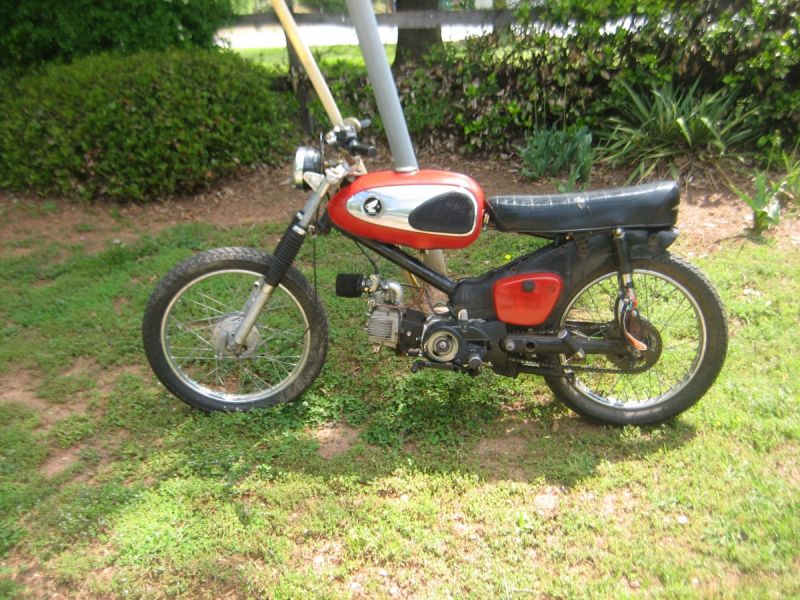 and another c102 I rebuilt, a c70 and a few lifan clone motors on various projects and things. 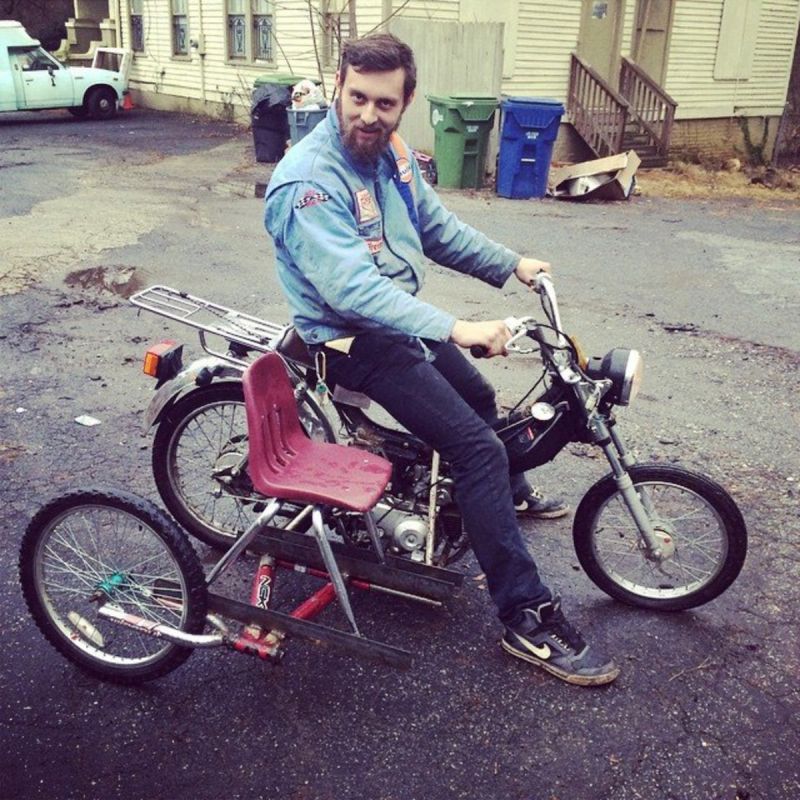 I also had a c110 for a while, it also belonged to a friend but I fixed it and rode it for a good part of a year.

The battery charging issue you're describing I had on the s90, same thing. It wound up being the selenium rectifier, it's a weird old non-optimized solution to a rectifier, you can get a modern alternative and probably restore charging

Just put a chinese clone carb on it.. runs great out of the box I think lucked out. Currently trying to figure out a controls situation, all the brake levers are busted out on mine and I don't want to just order some and hope they fit.

My best source for old Honda parts so far.

Been using dratv for years. They offer reboring with piston sets included.

I've seen complete new top ends on Ebay for less than 100.00, but I'm sure stock is better. I need to find a stator and left side stator case for my pushrod '64 CT200.

I had a vespa PX125, classic scooter (tho pretty trashed) I sold to a dude who used it for hunting & fishing. Like the most anti-macho hunting rig. Worked great tho, why wouldnt it.

The seat is where I'm currently fucked. I have the seat pan and bracket but no foam or cover. I could make a jank ass seat, I have a sewing machine, but man a sub $60 replacement would be nice

He does great work for reasonable prices.

Aw yea, CT 90/110 are my favorite underbone Honda's, I just never really have had room for one in the stable. I built my dad a c70 a couple years ago which is kinda my extended fleet, so I feel like I own one and would feel guilty buying another, but if the c70 was mine id sell it for a CT.

My dad doesn't drive the c70 enough so it's always got a dirty carb. Maybe this summer I'll grab it and get it churched up a lil bit. Bigger front sprocket, maybe an 88cc cylinder? I haven't done z motor performance stuff much.

Can you swap the c90 DC stator to the c70 ac stator? It's way better. Are they 6v? I had a really early c70 that was the DC motor and that thing sucked. Randomly would just kill the battery, I learned that the headlight/key switch contacts being crusty can cause it to not charge too, so you gotta check those.

i have a C100, the 50cc predecessor to the CT##s. Legally a moped here in VA and will be registered as such once i rebuild it... first round of "get it running" parts ordered

peeled the tape off the seat today... imma clean off the old adhesive and slap on some new tape until i get it recovered.

Very decent “original”. Are the wheels painted over chrome?