Just got done putting this together, got it up for sale already for 1200, we will see!

That's really awsome. I put this CM185 together, I had fun building it and it runs great, cruises real quiet and smooth. (edited)

It was a nonrunning but pretty standard trashed old 93 nighthawk, i picked it up from scouten at the zeros swap at the end of January. 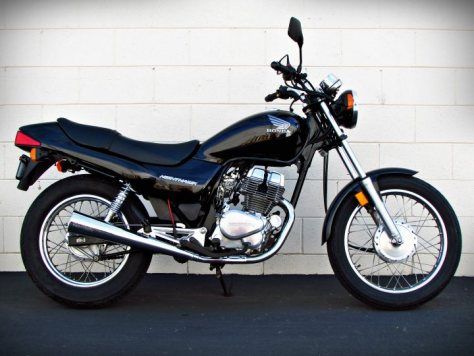 pic just for reference, picture that but busted plastics and blinkers etc and covered in literal rat shit.

I didnt take many pics along the way, but it was locked up. I managed to get it freed and hone the cylinders and reassemble, the carb gave me some trouble we were talking about in the other thread, and I had to rebuild the starter cuz that was burned out from trying to start it while stuck. new battery and after all that it ran, i removed all the plastic and put a little filter in, had the machine guys at my work bend a little tail loop to match the generic cheapo CG125 seat & tanks on ebay, theyre lik3 $50, it's insane how cheap.

Oh and stock it's 18" drum front and 16" rear, but the hubs are the same size so i got a $40 used front wheel and used the original spokes and all to relace the 18" front rim to the rear hub. my 3yo daughter helped - it was a super fun project.

treats hooked it up with the tires, goldenboy 4.1's. That needed longer shocks, and then i welded up a little battery box out of the front sheetmetal piece from an old washing machine, I welded a ton of tabs for lights blinkers, seat support, new tank mounts, and made a mount for the fender, which is just a wide generic chrome fender that maybe came off a magnum lol

All together, including the bike (which was free) I spent under $500 which is pretty fuckin sweet, and it only took me 2 and a half months which is kinda impressive too cuz I could only work on it after bedtimes on tuesdays from like 8-midnight.

It's super trendy but i planned on building it and selling it, i have no room for it. i'm pretty proud of it though. there's some flaws for sure, the oil sightglass had prolly leaked and been coated with JB weld, there's rusty pitting in places, paint chipping especially on the rims, the welds look OK but not pro, the seat is a liiiiittle high leaving some space visually between bottom of seat and frame, the decals on the tanks arent perfectly straight, little shit that maybe nobody else notices but I do

it's far from good but good from far, photographs well. some kid will love it as a 1st bike.

Nice job, and a nice profit if you get your price.

Random question, you still got the stock rear tailight? Interested in selling it? Mines been crack the entire time Ive owned this bike.

Having the welding capability gives more possibilities for customizing. These little beginner bikes make the best custom builds and they are perfect for dependable back road burning, I used to laugh at them- especially the CM185, the ugliest bike ever made- but now I see what can be done so easy and cheap to make a cool racer out of it.

Wish ohio was closer. I would be all over it!!

The seat and tank look great, were they a package deal new?

look how cool will's bike is everybody! i got a junk nighthawk anybody can just have. holler. only thing is, you gotta come get it, oh and it "ran when parked." all i'm sayin...

That CB125 would make a really cool cafe style bike, perfect for around town.

> That CB125 would make a really cool cafe style bike, perfect for around

Had it with low cafe bars. Was nice looking but not very comfortable. I always start with low because of the look but end up with superbike or other low rise style

Yeah that's pretty cool Will, my buddy is borrowing my dt250 right now and left his rebel 250 at my place, I was looking at it the other day wondering how I could make it look cooler

Good eye for that backdrop. I'll have to remember that converging-lines-urban-industrial chic next time I post up a pic of a vehicle. Nice. And nice bike.

I think so, and the side plastics might be mostly OK. I got some other parts I'll pile em together and send you a pic. PM me to remind me

the last one was to jimmy, about the taillight

The tank and seat are all over ebay and amazon for cheap, theyre fit to a CG125, its a little shorter than the rebel and narrower, but i just had to cut down and reshape the front tank mounts and I used a bent piece of flat stock to make a mount for the back that the seat also clips in under. it wasnt much work really and yeah there are a bunch of different options and version of those seats and tanks available and under $50. like here's the 1st one came up: 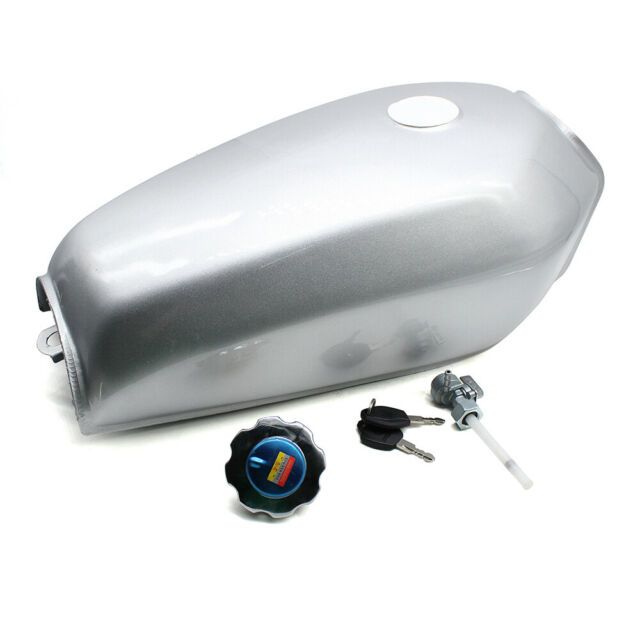 these seats are like $30 and come in a buncha options. had to bend another piece of bar stock to support the middle, it's a cheap plastic pan. people in reviews complained about comfort but honestly it's not bad at all.

My opinion on it, aesthetically the matching 18" wheels is my favorite part and I think what made it really work

I saw those tanks on ebay, pretty good deal and looks cool too, if you had to clean, paint and reline an old tank, buy a new petcock and cap seal, that would add up to way more in time and money.

I ordered the cafe style tank for the cg125 for my cb125 but it did not fit. Pretty decent tank for cheap money. They definitely need a little body work to smooth out the weld seams.

Like any other Chinese stuff, you need to tweak it or finish building it before it's usable.

i actually got 2 of the tanks. My wife is an artist and was going to paint something on it, but I think the pressure was too high, like knowing it would be the real make or break on this bike i'd poured dozens of hours into

anyhow while waiting I just ordered a second tank to get it all fit while she figures out what to do with the other one. at this rate the bike will be sold before then, and i'll just have a spare tank for whatever. it's a little too big/wide to really work on a moped tho. I have seen people use them or similar ones and it doesn't really looks right

Grabbed my new tank from Ebay. Not a perfect tank but I am stoked on it for my project. The seller had like 8 diff tanks all with the same or very similar mounts that would go onto these bikes easily.

Pretty good fit, it fills the frame gap a little and leaves just enough room for a cafe seat.

wait is that the hero kids motor?

Good for you. I'm sure the new owner is pumped

You can't have too much of that "boring" paper, if you ever feel you do I'll send you my pay-pal info! :) Plus, you can by more bikes now....

dude, a near-running (as in starts but wont stay running simple carb and maybe valve job) GS550 popped up in my neighborhood for $300 a few days after i sold this, but i REALLY need more space more than i need more projects, I just took on two old Yamaha YL1's I need to finish before considering anything new