so i don't even know where to begin when talking about this bike, so i'll just post a bunch of pictures and some captions and let you guys ask questions if you want to. sorry the pictures aren't better, my camera's pretty crummy. 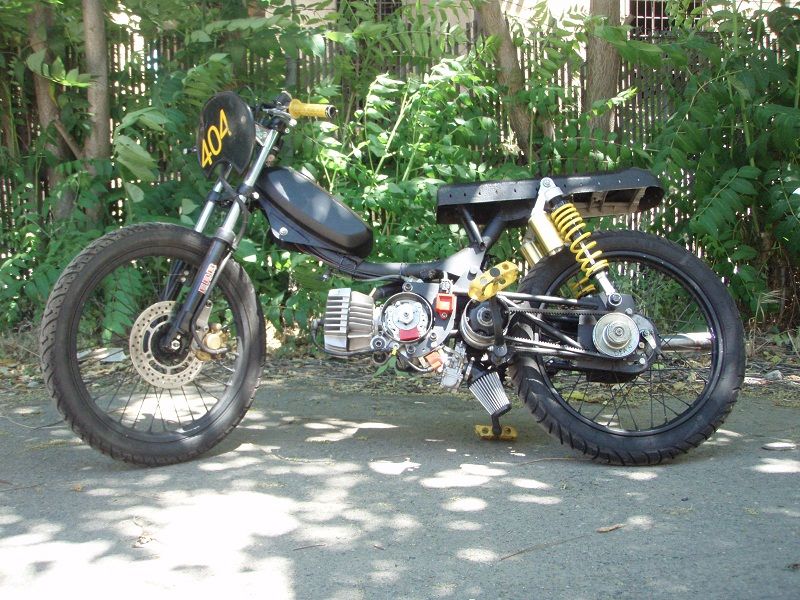 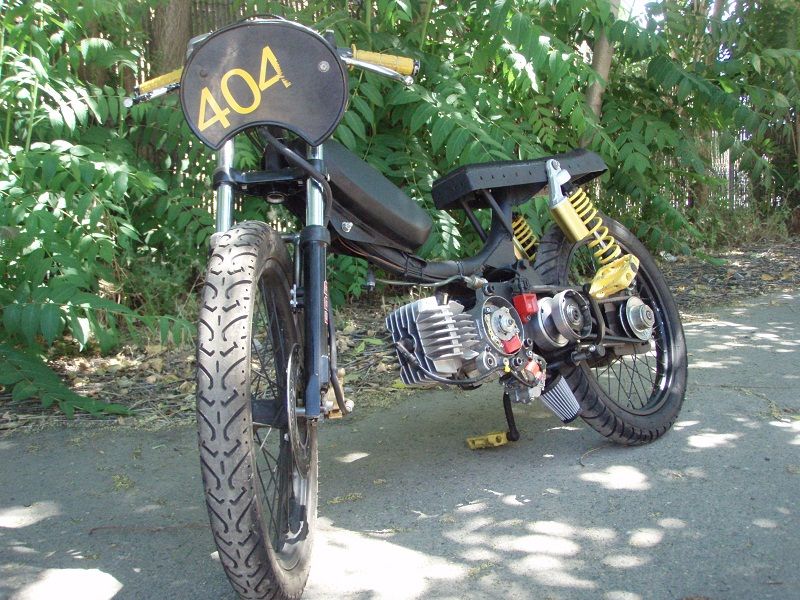 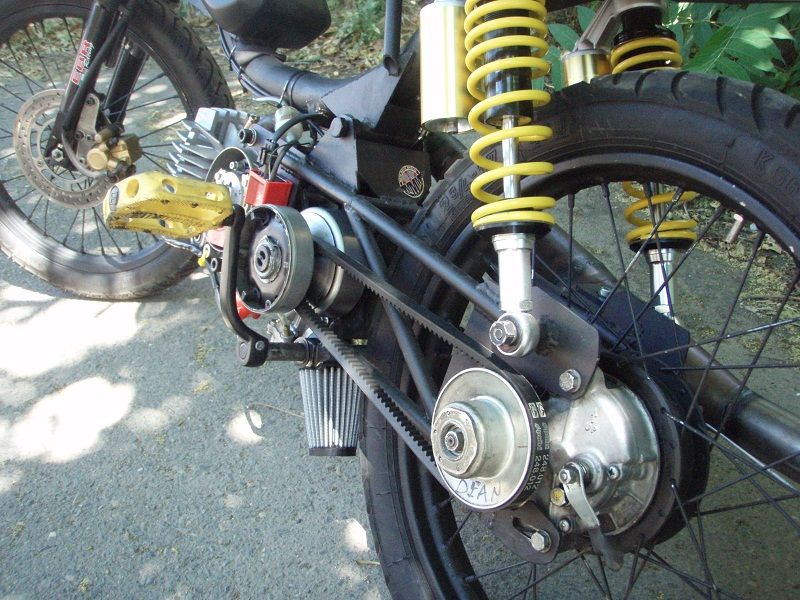 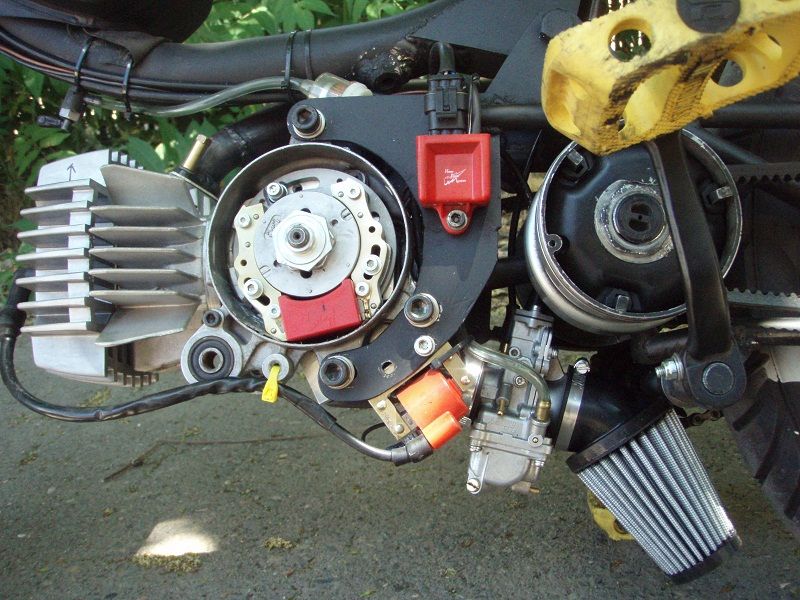 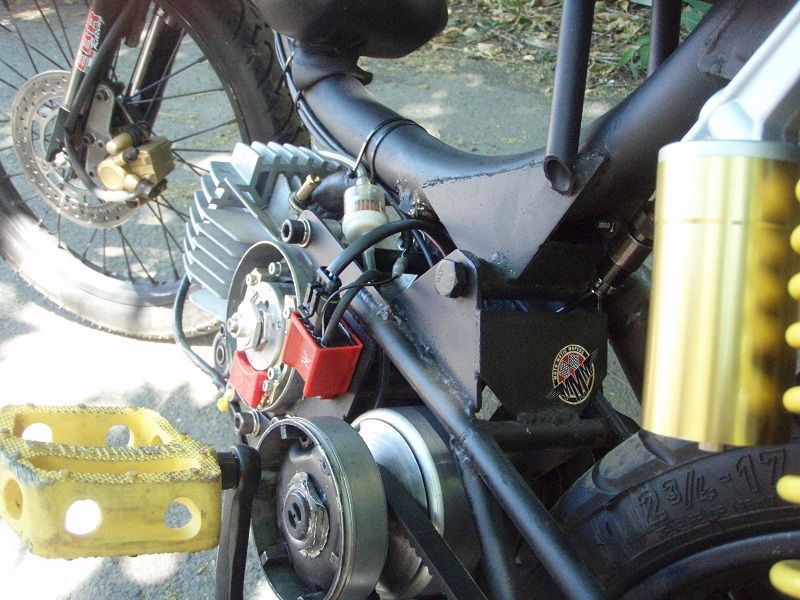 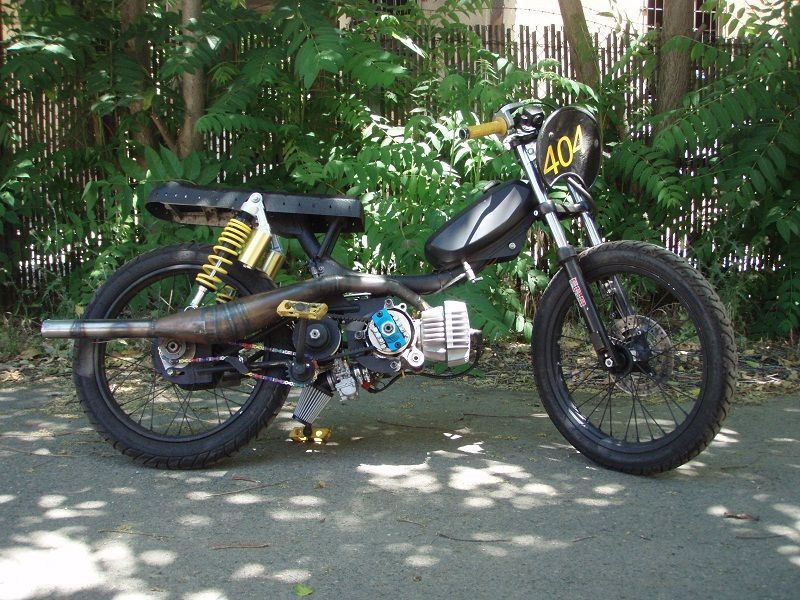 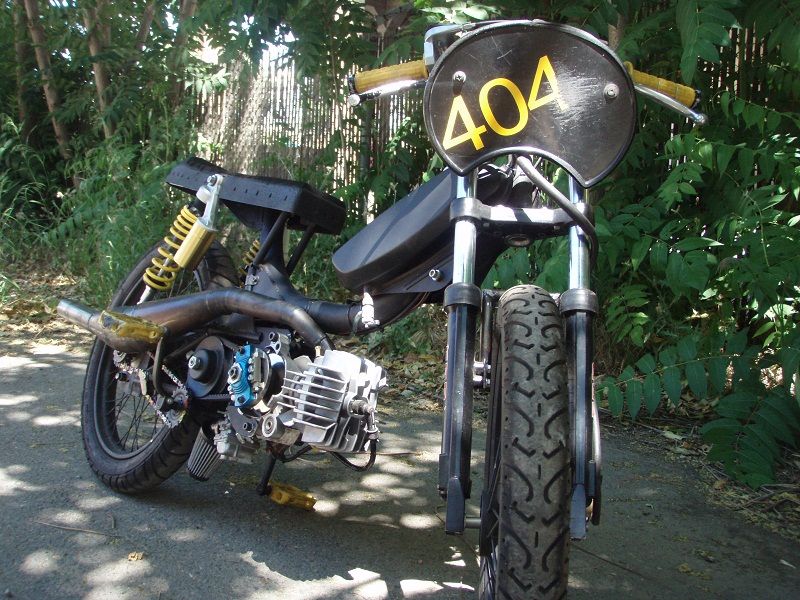 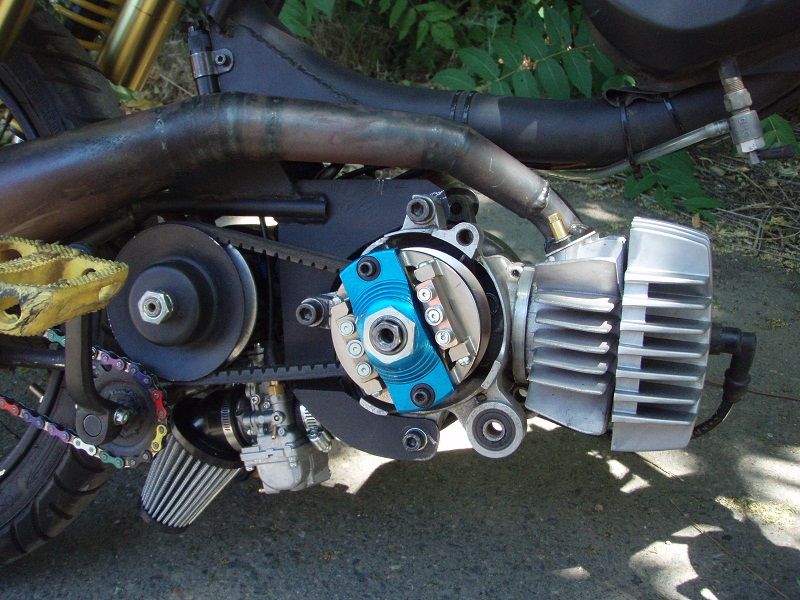 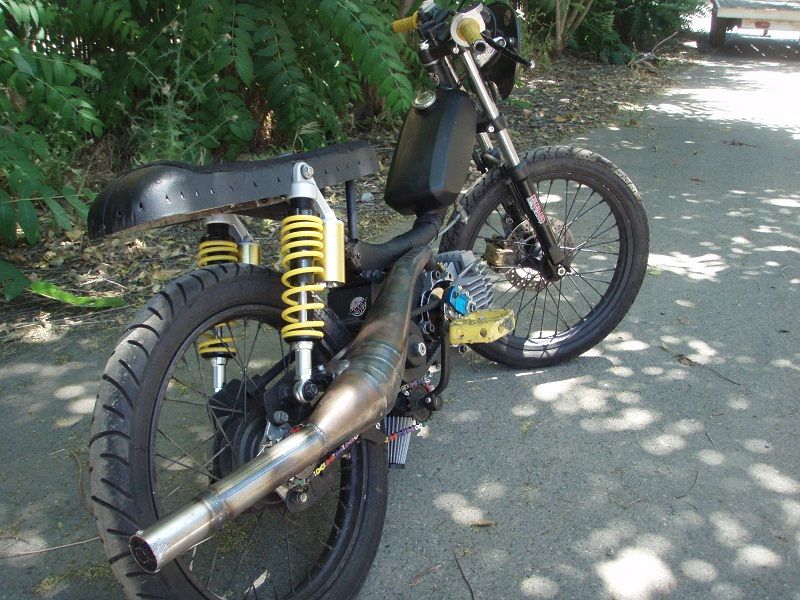 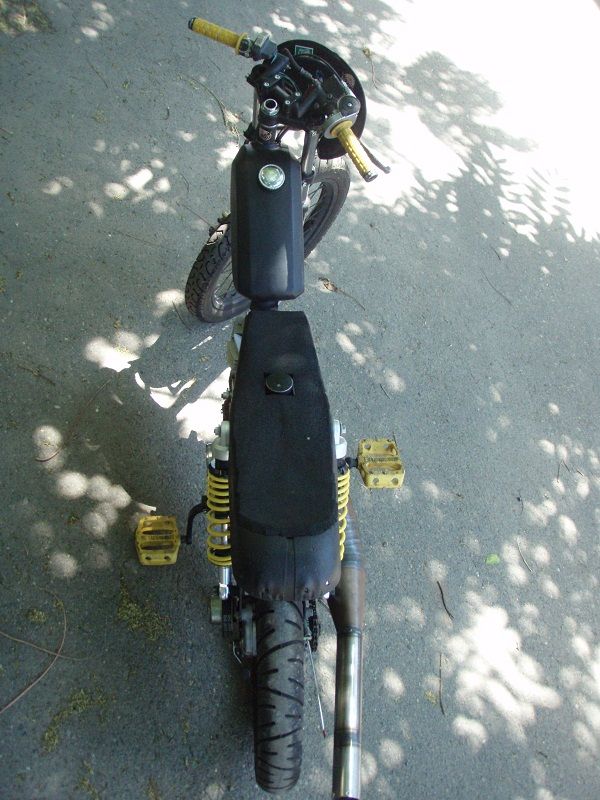 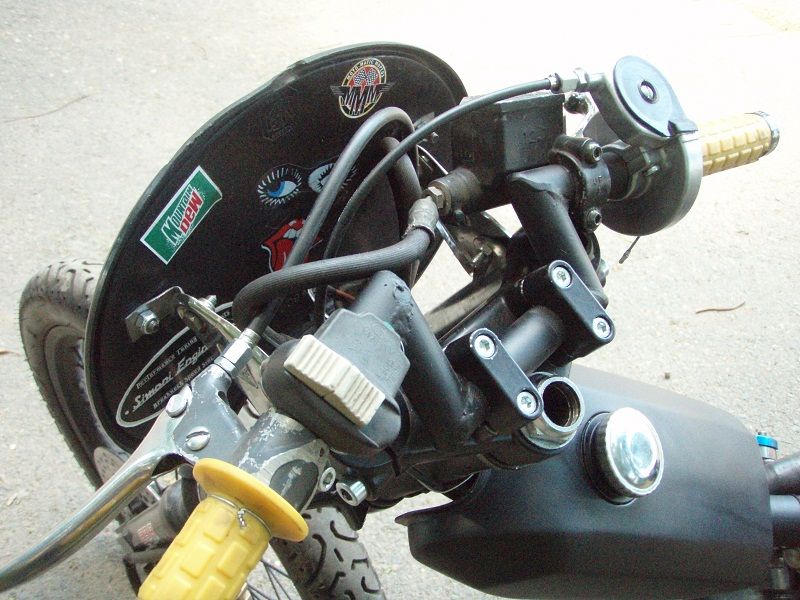 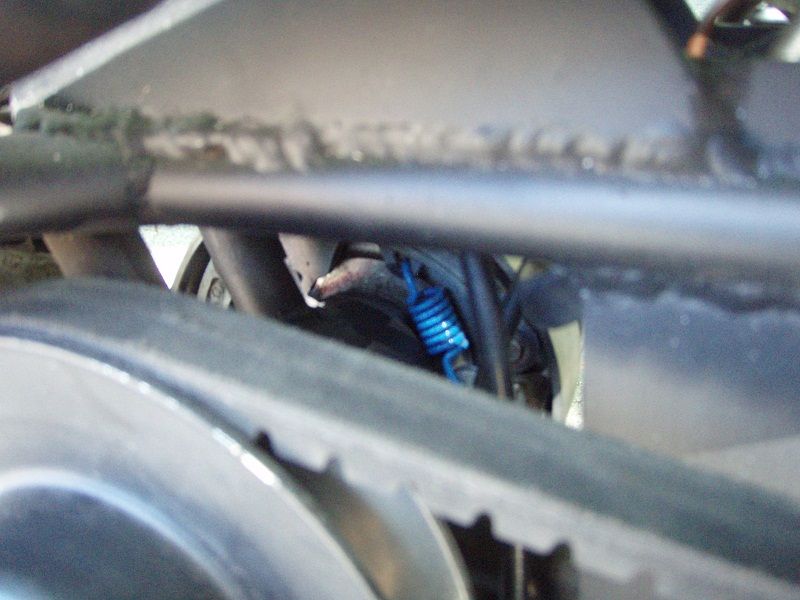 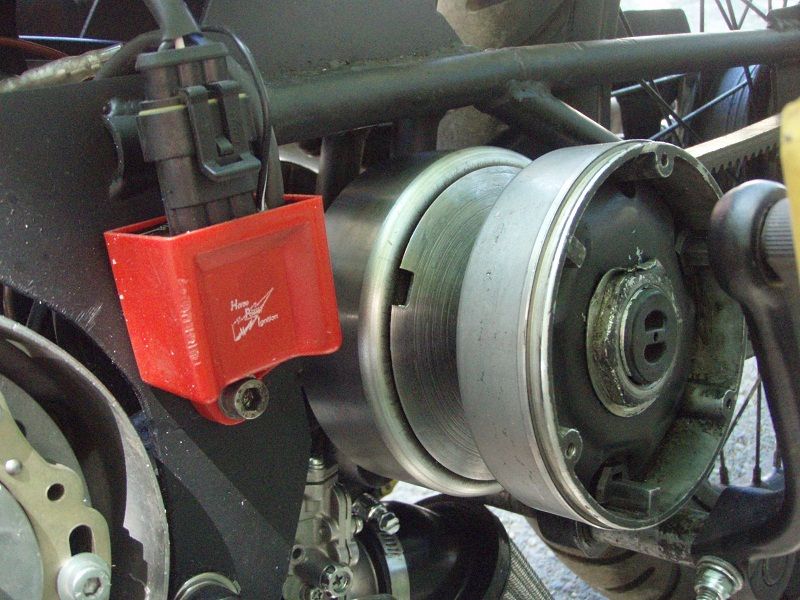 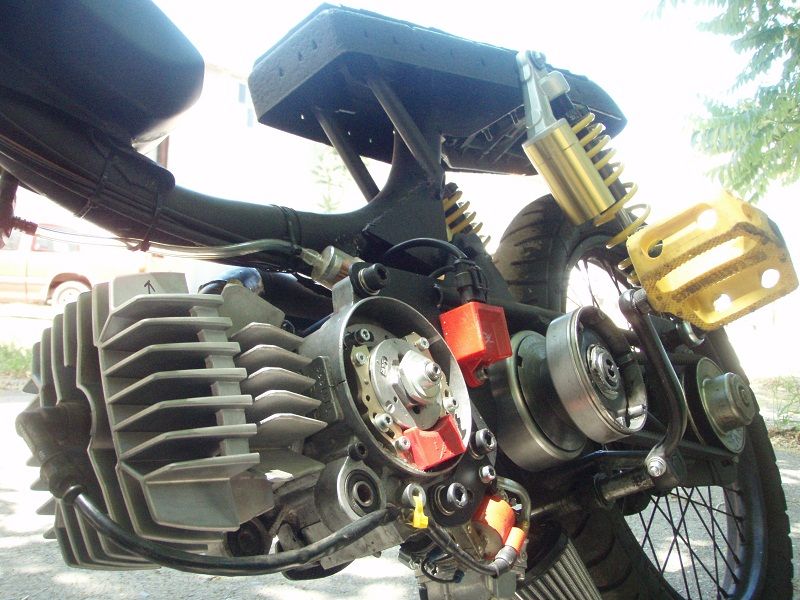 it's a for real moped! 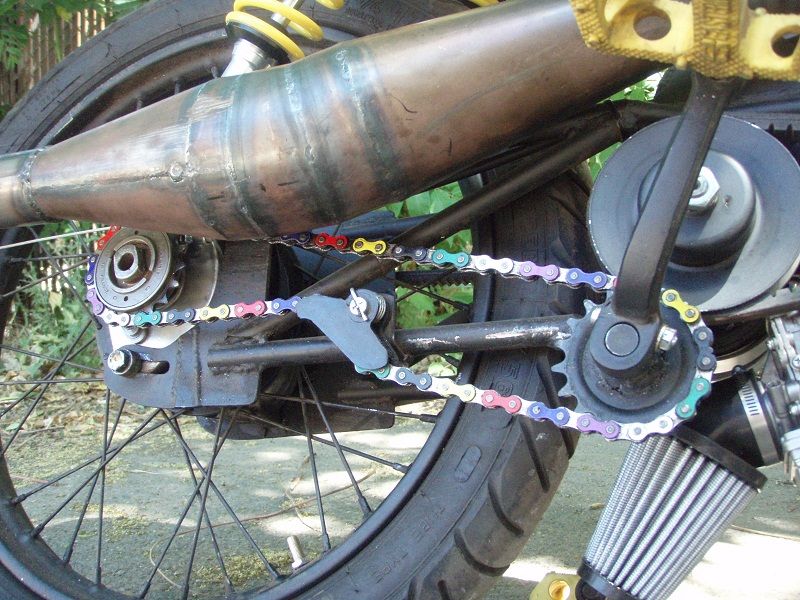 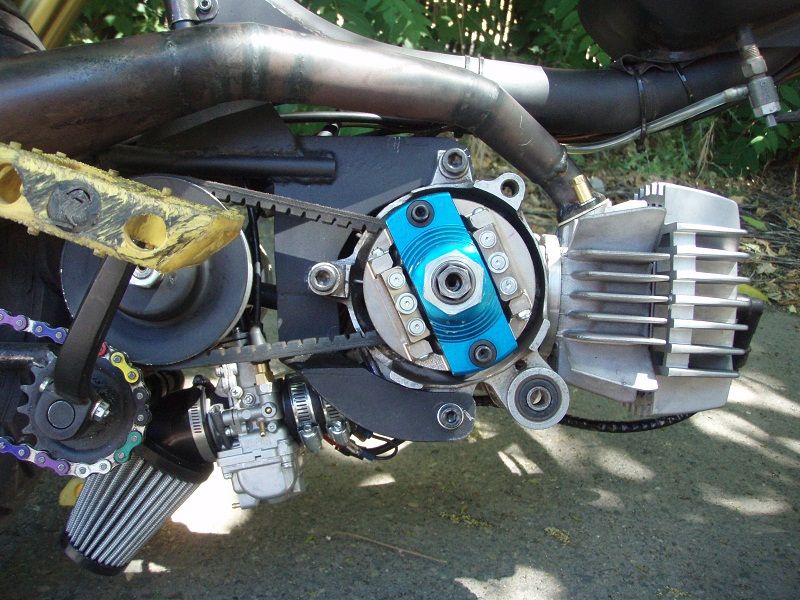 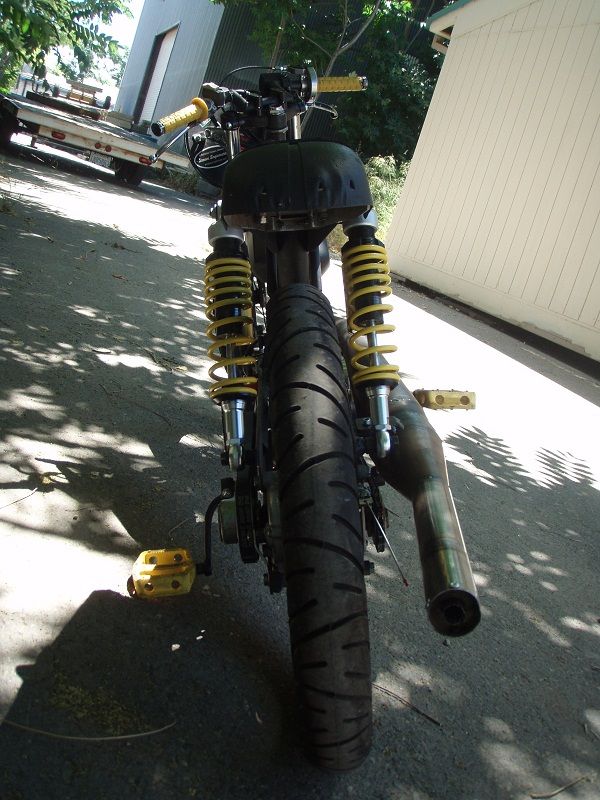 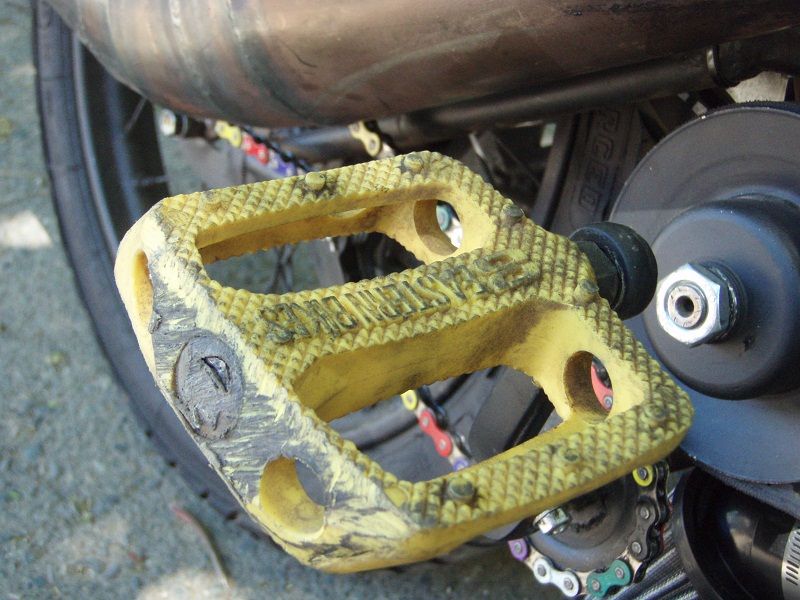 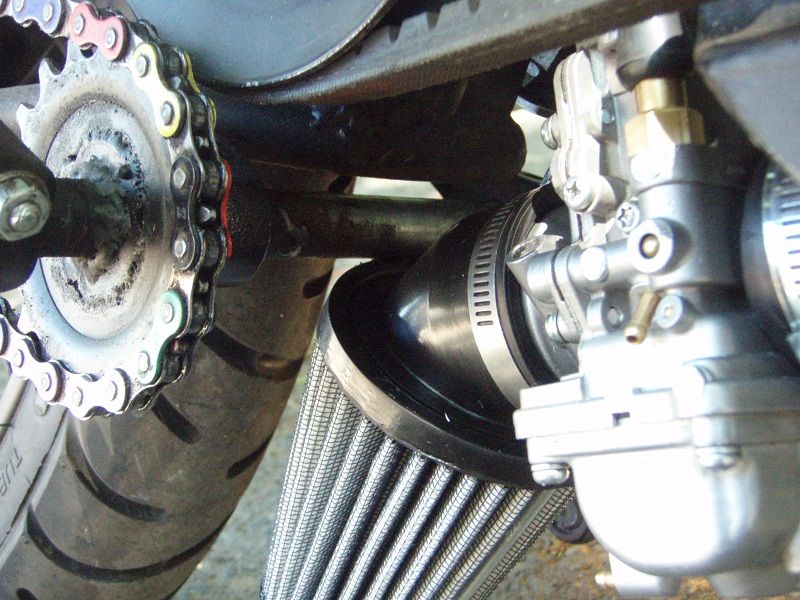 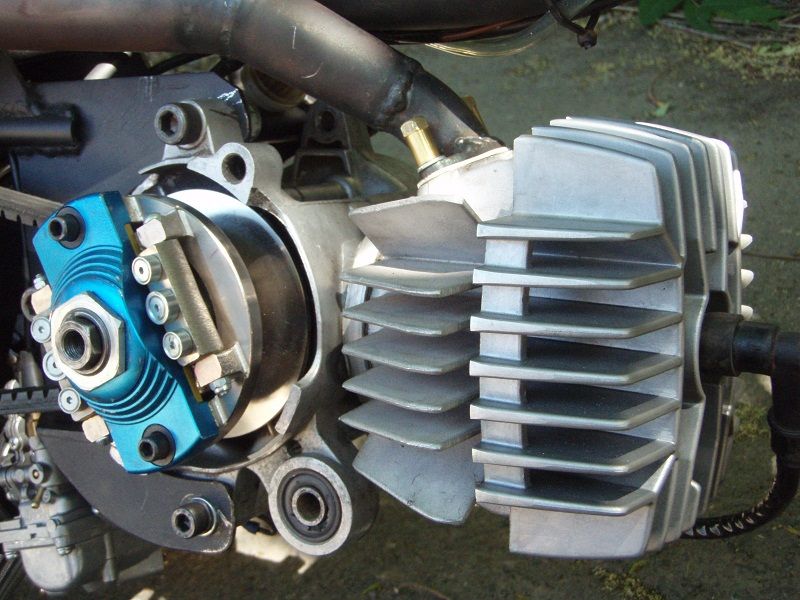 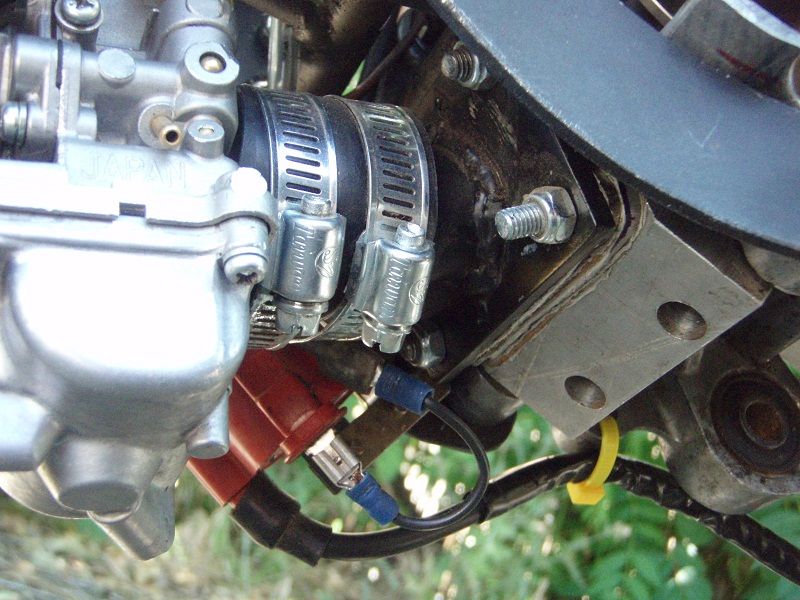 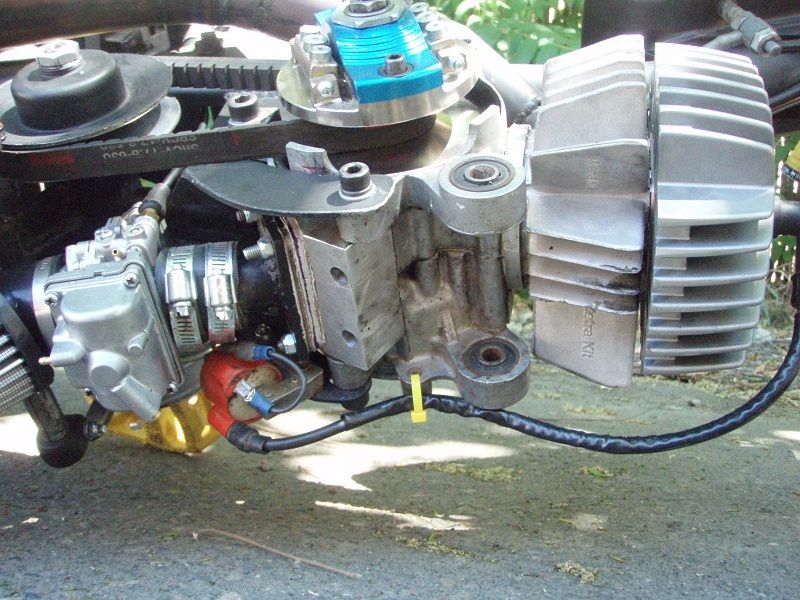 i was going to hold off on making this post until i had some numbers to go along with it, like the top speed of the thing, but the longer i wait, the more beat up the bike gets. it is a race bike after all, so it doesn't have to look pretty, but still.. i'm already on my 2nd set of bars and those pedals are nearly worn down to the axles, so i figured i'd at least get some photos up before it gets any more trashed.

also, i wanna see if anyone can guess where all the parts came from (you could find out by reading this but that would be cheating, wouldn't it?). other than the front wheel and brake setup this bike is pretty much all moped. oh, the 2nd belt is for a "honda 50", whatever that is.

hopefully soon i will have some top speed numbers and some fun video to put in this post! real soon! like next week soon! i hope!

also, yes it is double dual variated, and yes it does work fucking awesome and yes all of you engineers are going to hate my subframe.

i think your pipe is upside down.

fixed: i think yr engine is upside down

Whats the top speed by the way? I know you guys are mostly about popping out of corners, but how fast does it go?

oops. looks like a hobbit rear end. But that'd mean your engine spins in reverse of normal rotation. im confused

Bam-ba-lam! I don't even know where to begin asking questions about this thing.

at first i hated this thing

and then while going up to whiskey business three, everyone was packed into the jeep, and uncomfortable. at about like 1 hour into the first real long patch of dead silence, where no one was talking, and everyone was kind of realizing that we had a 15 hour drive, and there were 6 people in a jeep cherokee, and that it kinda sucked, is when it dawned on me

so i was like, alright, eureka, i figured out how and why he wants to double variate it.

and of course no one made sense of it or even cared, but i hypothesizes that if you geared it lower overall, you could set the first pulley set with heavier weights and the second set with lighter weights, so that as soon as athe first set is reached full variation, the second set of pulleys begin to variate

while you lose efficiency from a second belt, and double the # of moving parts that could break, you do have the ability to stay in the powerband for twice as much ratio and time as a single variated setup.

if the bike makes 50% more power on the pipe ( and most do, if not more ) , then taking a 10% hit in power due to belt loss and friction is still not a bad thing, if you spend much more time on the pipe.

so while there may not be the greatest initial ideas at mind, and there are some sketchy situations on that bike that could be addressed, the fact of the matter is that dean is out racing with it, and i'm sitting at home unable to do so. so respect is given where respect is due. that thing is crazy to watch videos of.

How thick is that spacer to compensate for the motorbacon crank? are you using the long rod doppler 'endurance' crank? or the regular moby doppler crank?

Seriously, I am confused too. This thing is ridiculous. Looks like some kind of derbi cylinder and a gila head. What's going on with that spot in the seat? Wth is that setup for mounting the rear wheel?

close enough! actually, right side rear pulley is derb, and the left variator is also derb, on a lathed down and taper changed hobbit clutchbell/pulley.

the thing in the middle of the seat is a ciao gas cap, originally i was using the pinto frame itself as the gas tank, but that proved to not be enough fuel for the track, so i switched to the current tank. i leave the cap on there cos having just a hole there is ugly.

also, i made the pipe. well, most of the pipe.. nate fit it to the bike for me

also also, yes on the doppler endurance crank, and i don't remember the thickness of the spacer.. it might be in my blog but i'm not sure.

str8 derpin' up in this bitch

back when both variators only variated half way and i still had frame tank!

this thing is damn sexy.

and i wish to have it do me.

thats not gay is it?

Holy fuckkkkkkkk......that is all I can say.

Very nice work lots of fitting and time, fabrication work and all that good stuff. I like the fact that you incorperated pedals even tho you probably didnt need to...unless thats a rule. The only thing I think you could probably improve on, if its not a rule, is to use larger scooter variators with more variation. I guess at this point you might not see much of a difference but I can imagine a bigger final drive would allow you to reach a higher top speed.

Overall awsome build, you have to appreciate the fact that it took some serious time and money to build this bike...probably more time and effort than anything.

But really its your bike, so as long as you love it...thats all that counts.

hope i can see it in real life sometime.

Been waiting for pix...

At first I was like, why the hell would you flip the engine, and have the intake right in front of the rear wheel?

but damn when you think about it it makes a fuckload of sense making the double dual work.

my only concern is, have you seen lindas ankle from wrecking with the case covers off??

i know you want it light as you can get, but think about that shit. race bikes go down as well.

look at you go, terrydean.. dang

Well done sir. remember kids.. these are not toys..