I heard the one about fat girls and mopeds anyone know any others????

A college student has just graduated and he wants a new car. So he goes out and gets a new nova ,690 horse power,that says it can do about 320mph. This kid with a new car and all decides to take it for a spin. He takes his bran new nova on the hiway and is doing about 100mph when he sees a stop light in the road. When he comes to a stop he sees an old man on a moped drive up next to him so he rolls down his window.

"Very nice nova, can I look inside?" asked the old man. In reply the student sais, "Sure... no prob". As the light turned green he rolled the window back up and decided to show the old man what his new nova could do. He smoked his tires and held it stedy at 100mph. Dispite this amazing figure, only 10 minutes later the old man comes flying by him with ease. CLANK CLANK ZOOOOOOM. Well the student didn't like the idea of beieng passed by an old man on a moped so puts more pressure on the gas. Now he passes the old man once again and now the spedometer said 200mph. 10 minutes more pass him and so does the old man once again. CLANK CLANK ZOOOOOOOMMMM! In his anger he floors it and passes the old man again this time at top speed (320mph). Given another 10 minutes here comes that dang old man again. CRUNCH CLUNK ZZZOOOOOOOOOOMMM!!!!!! The student gives up and stops next to the old man on the moped , who had also luckly stoped at the light also, and rolls down the window. "WHAT THE HELL TYPE OF MOPED IS THAT?!?!" screamed the student in defeat. In reply the old man on the moped said, " a broken one, and would you mind unhooking my suspender from your door nob?"

Why did the moped cross the street?

To get to the other ride.

batavus regency. it's not even steampunk.

yeah, you got jokes

What you didn't know is that the fat girl joke has been re worked...

What do fat girls and mopeds have in common?

They're only fun when you're riding them.

Nobody likes a bully. * /
echopuch

actually the punchline is they're fun to ride until your friends catch you doing it.

why did the sunset riders cross the road?

because they had thier dicks in a chickens ass!

Hence the joke has been reworked...

I always thought the AMF Roadmaster was somewhat of a joke 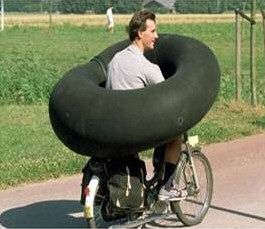 why didnt the moped cross the road?

because it was chris'

Did you hear about the proctologist who bought a moped and had to rebuild the carburetor.He did a perfect job, and he did it through the tailpipe.