On another thread someone mentioned starting a nomad chapter. I LOVE THIS IDEA!!! It fits my lifestyle perfectly. I travel the U.S. via GMC Savana and I love the idea of a nomadic tribe whose territory is everywhere! Davey or someone needs to develop this! If you need help in any way count me in!

You do know that the Nomads are a chapter of the Hells Angels? Might be wise to choose a different name.

Yeah, I'm there too! Only my nomadism tends to be limited these days to Vegas and SoCal.

Well, we could call it the gay nomads, but that might cause more problems. Gonads? LOL. Bromads? LOL.

What about the Drifters?

too bad the orphans has already been taken.

anyways, fuck a name. just travel and bring your ped with you. thats what i do, and when that shit isnt getting fucking destroyed, its being ridden with all sorts of awesome MA and non-MA people. hell, even after it got toasted i still just met up and got drunk with people from the forums. when you travel, can you bring your ped? if it is even remotely possible, than do it. if it is absolutely impossible, do it anyway.

i think basically we would just need t-shirts and we would officially be a moped gang, right? i've heard thats all there is to it. oh yeah, and buttons.

Don't forget the stickers. Those are important too.

right, thanks linda. i knew there was something i was forgetting.

Yes I can, when I finish building it.

YEAH! LETS ALL JOIN A GANG WITH TARGADOUCHE!

haha i read this as a whole name on daveys post and thought itd be fitting.....how about noMA???

sunset, you can join if you want. Being in upstate, you must be lonely now.

would noMA mean you are going to pay for and have your own website? cos that would be raaaaaad!

maybe its because i have been drinking since noon, but i feel that i should type the following.

dont get me wrong, i love MA. everyone i have met have been incredibly awesome stand up people, i just personally dont care about an endorsement from MA. would i turn it down? no. will i strive for it? eh... probably not. i'm a loner dottie, a rebel. plus, i am a gang of one, sometimes as many as four though. you guys will see an nice big athens/atlanta showing at a good amount of rallies this year though, its going to rule and you will all feel it. anyways, this site has led me to meet some really awesome people. plus, yeah. right? i have to go practice now. mopeds are cool.

I'm wearing a Geddup kids sweater with a funny robot on it from my youth days as we speak. That has nothing to do with the rest of this post.

from something to write home about! i love that record.

I know all about the hells angels nomads. actually, its a chapter, like saying you were moped army san fran, or whatever city. some of them just dont have a home town, there for nomads.

we could always do it up as MONADS. after all, it does take some mo-nads to ride some of these mismatched beasts ive seen on here.

fuck it. its officially unofficial. welcome all to the outcast gang of m/a

Monad is also a really beautiful philosophical concept from Leibniz. It's a concept about love, desire, and unique, affirmative, irreducible difference. Deleuze called it a "singularity." In the simplest of terms, every "body" (corporeal or incorporeal) is composed of everything it has ever encountered (in an external sense), as that body has uniquely internalized or "folded" that external experience. No two bodies have had the exact same exposures, encounters, and relations (with other bodies and the world/universe), and no two bodies have selectively folded them (internalized them) in the exact same way, therefore no two bodies are or can be exactly the same. All bodies are unique and different. Singularity or a Monad is about the affirmation of this difference (for Leibnz it's kind of like a world or universe of itself that is composed of what is outside of itself... very super cool because it's not at all about a "subject," even though it is about a non-representational or "subjectless" subjectivity).

Davey, I am with you on the "official" vs. unofficial moped gang stuff.

have fun as the wandering trolls

I vote, "Wandering Trolls" as the name. 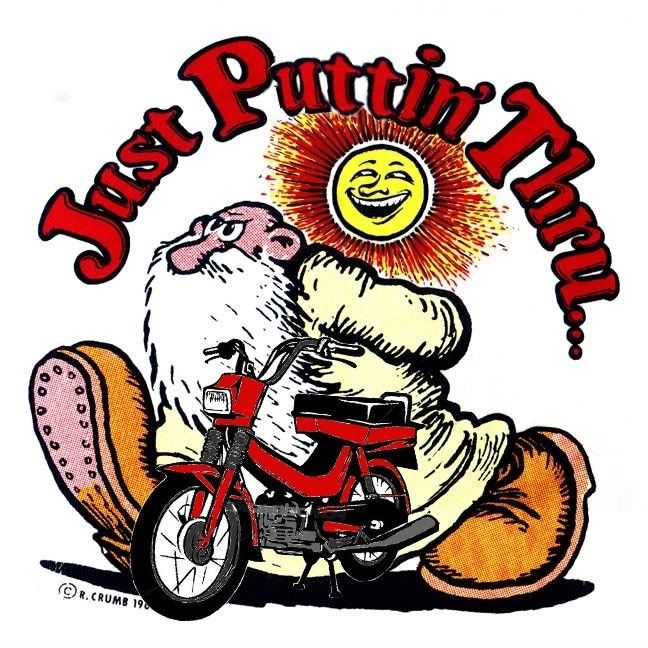