some dick stole my moped from the locked courtyard. she is gone. her lock is gone. i am ready to kill.

IF ANYONE SEES a rasta moped in the Boston area, or anywhere, KILL WHOEVER IS RIDING IT.

here she is and tell her i miss her terribly 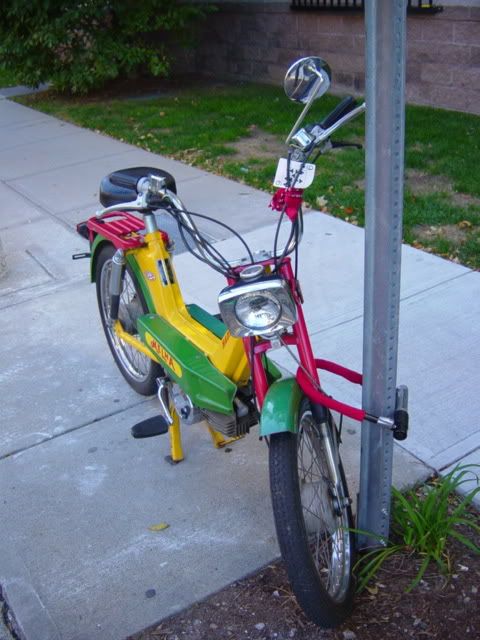 through my tears i am printing flyers

wow, that fucking sucks...but luckily it's instantly recognizable. hope somebody spots it soon.

they have undoubtedly already spray painted her because no way they could sell her within 50 miles of boston without someone recognizing her.

Hard to hide that..but they will probably spray it another color with a rattle can. Is there any way to identify it if they do, anything custom besides the paint?

it should be easy to find

gut to be someone that knows somebody that lives there

Hopefully the brainiac that took her won't figure out the choke or some other simple function, then park her and walk away.

I hope you find it! that blows! why would someone steal such a noticible ped? makes no sense.

scum of the earth!

this moped will be recovered, and whoever is riding it will be destroyed.

the sadness, it is too much, i can't sleep.

It will come home, even if out of town. I scour Craigs NY NH RI for ped deals so no one will be able to sell that anywhere n the Northeast

Be on the lookout for a rattle can painted columbia that cant stop.

We all should start putting hard to remove markings on our peds, like a phone number or address done with a bead of weld or stamped into the headtube.

Something that people in the know would know.

i had a dream about this last night. this is going to turn up.

A discreet marking that is not commonly known (secret)

That sucks Susan! I hope you find her.

i see in you're pic that you had it locked with a U lock. did they bust that lock to get you're ped? i use a kryptonite U lock and was wondering what people think of them. how easy is it to break those?i always thought that a U lock would be safer than a chain and padlock as padlocks can be easily cut with bolt cutters. what are the best options in ped security?

Chain a hungry pit bull to your peds..or an I.E.D.

Since the work week has started and more of us will be around Boston, this needs to be bumped to the front of our minds so we keep a sharp lookout. Susan, if I spot the dirtbag I will bring you his scalp along with the Columbia.

thanks, dave. i have been searching and searching but to no avail. i think some tool in my building (locked courtyard requires vestibule keys to get in) saw me taking her out and targeted her, so they probably planned it out and she is probably long gone by now.

i don't think random kids would break into the courtyard and steal my locked, covered moped that is difficult (if not almost impossible for me when all the bikes are there) to get out but leave the four or five bikes that are unlocked there.

i just hope that if i never see her again they take her far enough away where they won't spray paint her so she can still be green and red and yellow and totally awesome.

Dont give up. Every time I go out, I take a spin around the fenway area and scan the scene with my superb moped vision. We'll find it!

Did you talk to the property manager. Totally an inside job and you should be compensated... even when you do get it back.

We're all looking out for your Marley...

I scan the Northeast for moped buys. If anyone tries to sell it on line even in CT or NY they are toast.

That stinks. How exactly was the bike locked up? That will give you an idea if it was a slow or fast job. Depending on how long it may have taken, it may give some insight to whether or not it was really an inside job. Either way, I would post a message in the courtyard to see if someone let anyone in by accident - since keeping the bike there was a sensitive issue with gas and all, you can say someone stole your bike with no description in the flier. There are only a few ways that someone could have nabbed that from a reasonably secure location...

1. It's another bicycle owner in the courtyard who took a fancy to the thing

2. It's a friend who visits often of someone who lives in the complex and asked someone to let them into the area

3. It's a person who visits often enough to know it's there, and was accidentally let in.

4. Someone notified the building management and/or complained about it and it was towed or something like that.

Despite the issue of having a moped parked, I'd ask the building management if they knew anything. Sounds more probable than a bunch of kids gaining entry to the courtyard just to steal one moped. You could say it was a friend who got caught in the rain and had to park the bike there or something like that if it will indemnify you of being the owner.

Just a note on locks if it helps give a timeline:

Cable-type locks - Mostly defeated in a matter of seconds with a proper cutter. Very easy for inexperienced thieves

Generic or bicycle u-locks - Can be defeated in a matter of minutes, or rendered useless (key won't work anymore) in the process of theft

Motorcycle chains - Kryptonite and On Guard chains are extremely difficult to defeat without more powerful or electrical tools.

yeah, who is your management company? it is not uncommon for management companies to tow away vehicles that they consider to be illegally parked on their property. they will usually make no effort to find out who the owner is.

i put a flyer up in the courtyard immediately saturday night with a picture (and in the vestibule of my building). i called management as soon as they opened at 8 this morning, they didn't take it. i asked to be transferred to maintenance and the guy was very sympathetic and knew right away why i was calling because he had see my flyers. management apparently doesn't care about mopeds in the courtyard, he seemed very concerned about it. he later spoke to the construction workers about leaving doors open because when i was standing staring tearfully at the place i last saw marley later in the morning i heard the construction workers griping about it.

a few people in my building have spoken about the construction workers who were working on the building next door (the courtyard is shared between 82 and 86 jersey) and i think they might have taken it. they have trucks. they were dicks to me when i asked if they had seen anything suspicious. but if they did there is nothing i can do about it.

there is no way someone walked in off the street, stole marley who was locked, under a cover, and difficult to get out, and nothing else (there are a couple of nice unlocked bikes there). this was somebody in my building or the construction workers. she did not have a motorcycle lock but it was a decent lock and much much more than the unsecured motorcycle and the unlocked bicycles and comparable to bones's lock. bones was right next to her and wasn't touched.

AS AN ASIDE - if anybody lives in districts besides D4 and B2 could you please post a flyer in the police station for me? i can email you one either with a picture or text-only. here is a list of the districts, this would really help me out -- districts break> or if you live in somerville/cambridge etc. and want to put one up just email me i would really appreciate it

also the second link method is a lie

Ask for the name of the constuction company and tell me. lets make them sweat a little.