so i'm riding my 50v, happy as hell. just did a plug chop, looks like a delicious cappuccino. everything is right where it needs to be, the world seems to have this warm blanket over it. all fuzzy and cozy, like a big hug from the universe. i love this bike immensely. i mean really, its up there with my favorite things in the world. there is nothing i wouldnt do for her. anyways..

i take a right onto oneta street and i'm thinking, "yeah, i'm going to open this up and scream past all the chicken plant workers". so as i round the corner i pull back on the throttle and hear the worst noise in the world coming from my magneto, like two babies beating a puppy to death with frying pans. i look down just in time to see my magneto fall off and roll down the street faster than the rest of the ped. what the fuck? not in front of the chicken workers!! but yes.. fucked. sheared my crankshaft right in two. so i picked it up and throw it in my backpack like that was my plan all along and push the moby home in shame. the jug is fine, it didnt seize, i'm thinking that it was just its time to go maybe. any ideas on why the hell this would have happened?

so now i have to rebuild the whole bottom end, maybe i'll go all out and just build me an AV10. i have always wanted to. fuck. this is my life. 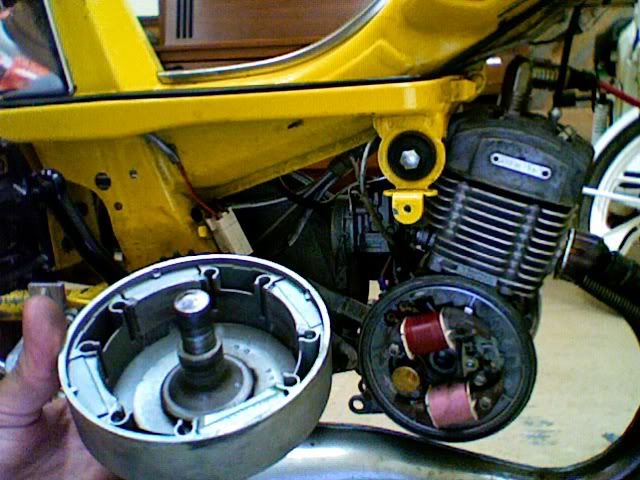 damn man! too much power on a not so great crank, i guess. maybe it was the crank, maybe the bearings... i dunno. looks like a fairly clean shear to me though.

treats sells new cranks, id look into one of those. if its quality is proportional to its price, you should be all set on crankshafts for a long time.

does anyone know if i can use my stock magneto on an AV10 case? i really think its time to build something rad.

Is that a Wurlitzer organ in the background?

nope, its a baldwin upright. the wurlitzer in in the practice space.

"How to remove your flywheel without a puller"

That really sucks man! Using your stock magnito will be troublesome but it will work with an av10. You are gonna have to use either an av7 crank in the motor or you are going to have to secure the stock magnito with an av10 nut, they are opposite threaded on the magnito side.

If you want to go the av10 path (I don't really recommend it, such a pain in the ass!) just pick up a bottom end (or the full motor) from French ebay that comes with a cdi unit. CDI is your friend!

fuck cdi i run av7 magneto points system on an av10 no problems at all, with doppler crank and av10 nut.

btw that happened cuz ur bearing on that side went bad. looks like it was time for a rebuild. now its defiantly time haha, like how mobys tell u these things, a puch would have happily continues on it merry way till the bearing seized up and ur motor locked ur rear wheel.... u could have died.... if u had been on a puch AHHHH!!!!

lol, check ur bearings like u check ur balls. and if ur run a 2 ball variator that's not balanced with a 4 ball plate this will happen alot.

the variator is stock for now. that was going to be my next mod.

doppler crank huh? i was looking at the malossi that treats has. any thoughts on that? where can i find the doppler? no luck searching as of yet. yeah, its obviously time for a full rebuild, ha! i have another AV7, thats why i was considering building an AV10. the cases that treats has come with bearings seals, the whole nine yards. i heard something about mounting an AV10 to a 50v frame can be a little troublesome. what am i in for here? cause the AV10 thing is going to happen like right now.

oh and elliot, i have a puch maxi, and i am totally with you. as much shit as my moby has given me, i wouldn't trade it for 10 puchs. it's my baby.

also, i was totally going so fast about ten minutes before this happened. i didnt get to gps it, but judging by how i was passing people i would say mid to upper 40's. it might not be the fastest, but damn i exceeded a personal goal right before shit shat on my heart.

They are always the fastest before they die. Its kinda sad really.

ur in for alot if u go av10 but don't worry just get some cases and start from there. if u really want to do it u have to be all in.

note the cases treats sells do not come with case bolts or spring mounting brakets,for the the bolts it won't be too hard to find something that will work (i need fine thread) from a good hardware shop but u will most likely need to chop them down to fit exactly.

the spring bracket is a bit trickier, since it is a mirror copy of the av7 bracket, u can't use the av7 one. u can make something or make ur own tension spring as allen did (search performance for this)

the 3rd major pain in the ass is that the stock variator plate from av7's is too thick and will hit the case bolts on an av10, there is a different av10 version that comes on the euro bikes. your options here are to acquire that euro back plate (ebay.fr, rcv-team, luck, etc.), mill down ur existing back plate so it clears (time consuming and requires the right tools and skill) or get an after market variator ($$$$$$$$$$$$$$$$$$ and leads to more problems and more $$$$$$$$$$ from ur wallet to moped shops)

now we haven't even began to discuss the top end or any performance we are still hoping to make it run at this point. when u start to add performance parts builds get complicated quickly as many parts are not as compatible as they might seem. This becomes very apparent when upgrading transmissions. for example certain variators need a kickstart or a drill to start, some need a clutch pulley or u can't idle, others need the motor spaced differently and a performance tension spring setup, the belt sizes start to change with different setups, carb clearance issues... it goes on.

if i where u i'd get the av10 bottom ends, make a custom spring mount, and modify ur existing variator to work with the setup, maybe get a variplus or do a 2 ball setup.

as for top ends don't get a 50cc screamer unless u plan to get a performance variator as well, u will have NO LOW END w/o it.

id go with one of the 70cc kits or a stock 50cc av10 top end, i think treats sells the 50cc axwin one that basically a stock av10 top end, thats good start, it should go as fast as ur ported av7 w/o modification. u can use an av10 or av7 stock head, and the av7 points and crank if u want. (i ran an av7 crank for a really long time in my superbecane with no issues, in fact when it was in its glory days it was running an av7 stock crank) otherwise u should get a malossi or doppler crank but make sure u get the end nut as well from somewhere cuz the novi nut won't fit on.

U can upgrade to cdi later. or get a cheap setup on ebay.fr. ummm that about covers it. If u need the av10 spring bracket i can sell u one cuz i have a few extras but i can't send it out till September sometime.

elliot, you rule. thanks for the help. i have been talking with benji, and after reading what you had to say, i'm totally doing it. so excited.

i have looked at la-becanerie.com, they seem to rule. honestly though, i'm going to get everything from benji. he might be the single nicest person ever.