Maybe this will help someone fix their bike before this happens... 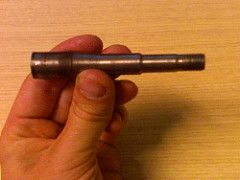 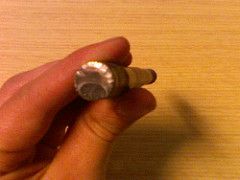 So the other night I notice my Hobbit making a weird metallic tinging sound. Like the clutch grabbing the variator and letting go or something. I figured it was just acting funny so I kept riding it. I had also noticed a week before that the variator weights had looked like they were chewed up by an angry baby. And there were also a few times I had had trouble starting it. It acted like the belt had come loose 'cause I could pedal it really easily. The final straw, when I decided it was time to get it the hell home and open it up, was the sound of the belt hitting the inside of the side cover.

About a block from the moped shop I hear a loud thunk like I had been hit by a car and then my engine winds up to an RPM range I had never heard before. When I got it to the moped shop and took off the side cover the variator fell to the ground. [insert sad face here]

So the moral of the story. If it's acting funny, look at it. Had I known I was about to shear off my crank shaft I could have saved a case. This one doesn't look too bad but I don't think I'll use it again. It broke just after the seal. If you look at the picture it looks like it had been cracked for a while, the 21mm carb pipe and kit probably didn't help the situation.

So take pitty and sell me your PA50 II bottom end.

your boyfriend James has one, hit him up. Oh, and we keep breaking rings, so maybe you can get some rings and work out a trade.

We've had the exact same thing happen to a hobbit too. Damn slightly unbalanced variators.

SO what is the cause?

I have heard of leaky bearings on the crankshaft, but dont know how this would break the crankshaft...it just looses compression when this happens...

It could have been dropped on the left side some time in the past. Or the roller weights got out of balance.

Too much stress being put on 30 year old metal?

there must be a cause and effect for this....

i have 2000 hard miles on a 55+ mph DR 70cc hobbit with rpms in the 8500 range (tiny tach) and modded vario, havent seen or heard anything funky. my weights arent perfect either.

i also keep my belt on the looser side so i can remove it without moving the back wheel but it doesnt slip. Bandits say if the bike has been dropped on the vario side its a sure death. my variator bell has a slight wobble probably from squeezing it in the vise.

i am convinced this engine is invincible. i am going to port the kit i need a bit more RPM to meet my goal.

I have two hobbit motors with broken cranks, both in the same place as yours and the last guy that posted about a broken crank. if you lay down the bike on the variator side then its all over, the variator is the first thing to hit the ground. maby not today or in the next week, but i assure you, hit the ground and you have signed you bikes death warrant. hobbit cranks are the fucking hardest thing i have ever seen, making them suitable for high rpms but also easy to destroy with a good hard hit.

wow, I am absolutely terrified for my beloved hobbit. What do you need to check?

I thought that it was indestructible. The perfect machine to ride into doomsday with.

Is it possible to fab some sort of variator guard, kind of like a derailleur guard on the cheap bikes?

Maybe the tough part would be to have it look good...

It seems like if there are at least three on this page who have seen this, there must be some sort of TSB on this problem from honda. I will email Honda, I am positive they will activate teams of engineers to investigate and we will all be able to bring our bikes down to our local honda dealers where they will balance our variators and install titanium crankshafts.

Hey man. Dean sez you're moving to Seattle the week after Blood Drive. Sounds like a bad idea to me. Try the week before, your soul will thank you for it.