I just remembered, I hope all you friendly mopedders to the north have a fantastic independence day today. 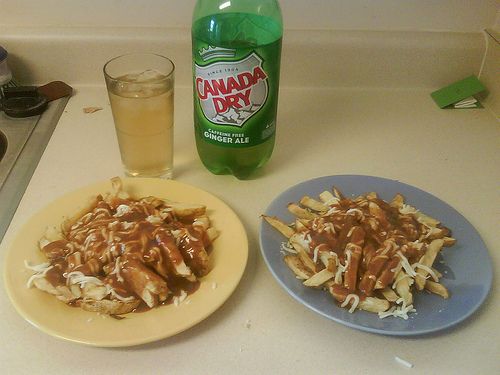 While Dominion Day is the traditional name, Independence day is something we don't celebrate. The Queen is and has always been the official head of state here in Canada.

Im glad we have friendly neighbors to the north.

Woooo, I grew up in Toronto.

thanks! just got back from watching the fireworks at ontario place - pretty amazing!

Wow, Canadians put up with British rule...then _asked_for British permission to become an independent nation. Way to follow our lead. You know, because we forcible rebelled against tyranny 91 years before you _asked_ for independence. Awesome.

Or maybe I've been drinking and think Canada is lame...

Legal weed, legal prostitution, Degrassi AND Degrassi TNG, and everyone gets healthcare. Why would anyone think Canada is lame?

weed isn't legal in Canada, it's just the same muddled legal battle over medicinal purposes we have here. there are people who have the balls to grow it and get away with it because there's so much red tape and legislation flying around that nobody can agree on what to do with these people.

Prostitution in Canada is only _sorta_ legal, it's more like it's just not _illegal_. There are laws against soliciting, but no general statement that calls the actual act unlawful. I've seen prostitutes thrown in a squad car and hauled away down on Church Street before, I'd say Las Vegas is softer on prostitution than Canada.

Ontario _does_ have legal public toplessness, but I can tell you firsthand, the bad _faaaaar_ outweighs the good when it comes to that one.

And the healthcare really does kick ass. I mean for the 20% of Americans who have really good health coverage, Canada's hospitals are inferior. But giving every participating member of society the same equal right to health care, that's the shit.

Most importantly, Canada has Kenny vs. Spenny.

Zach: You forgot legal drinking at the age of 19!

"there&#8217;s so much red tape and legislation flying around that nobody can agree on what to do with these people."

That's legal enough for me!

"Ontario does have legal public toplessness, but I can tell you firsthand, the bad faaaaar outweighs the good when it comes to that one."

In Portland, I can walk around with my dick out, but only if it's not errect. As if I'm supposed to run and find some pants if I feel a boner coming on.

I do have really good health coverage, and I still don't pay the bills for the shit not covered by my insurence. Fuck 'em. The medical industry is so corrupt in America, I wish someone could organize a mass "GO FUCK YOURSELF" movement where we all refused to pay every medical bill we've ever had.

is that flaccid dick law true?

I grew up in Brampton, Ontario! Happy Canada Day!

Please, you may say the hospitals are inferior (I don't know that to be true) But who cares if hospitals are better here if I can't afford them anyway. You can be excluded from even the very basics in this country if you aren't in the upper crust.

You can also be sure Canadian elections actually mean something. And the person doing the job knows the value of diplomacy. And can put together a fucking sentence.

Land of the free? Head north!

"is that flaccid dick law true?"

They only address public indecency, and it is only a crime if the person engages in "sexual intercourse" publicly or attempts "arousing sexual desire" with them self or another person.

So, you can be naked, as long as it's not sexual. Deezy? come to Portland?

_Land of the free? Head north!_

Happy Canada Day, eh! I loved the few years that I lived in Montreal. Really great town. And any nay-sayers can take off, you hosers.

i had a dream last night that i lost my clothes and was walking home naked and got a ticket for being naked. the cop in my dream thought it was funny but said she had to give me a ticket. it was weird.

I don't know where you live in Canada but neither weed nor prostitution is legal anywhere in Canada.

there's tons of bullshit rumors about canada that fly around the states. my favorite has to be the mythical Marlboro w/ weed blend.

One thing I about Canada that always bugged me is how Canadians are all so friendly, except when they get on the topic of themselves. Then they magically transform into these nationalistic pricks that make Americans look tame. The reason being that the U.S. kind of nationalism is simply naive idealism, thinking ourselves to be a shining example to the rest of the world. Canadian nationalism stems from a century-old national identity crisis, Canadian historians often cite that the foundation of Canadian identity is being "not-american".

Dsummer, you're preaching at the choir. Canadian healthcare is a superior _system_ operating with inferior _resources_. Canada has under 200 MRI scanners, the U.S. has well over 10,000. But everyone who needs an MRI in Canada gets one. People in the States who have health insurance, have a doctor who feels giving you an MRI is worth more than getting a kickback from the insurance company for keeping costs down, and can afford the co-pay get scanned. As for politics, Canadian politicians do stupid stuff all the time. They just don't receive the same type of international press attention.

Hahaha, oh how so many people think we can smoke weed legally. It's mostly that the cops aren't that assholeish if they catch you with a joint. Happy belated Canada day everyone :D.

Gonna jump in here re: the weed thing.

I live in Vancouver BC - where some of the best weed in the world comes from. Here, it's been de-criminalized - which means that while it still isn't precisely legal, you won't get thrown in the clink for smoking it in the street, or for possession as long as you aren't carrying a Hefty bag around with you. If you run a grow op - the cops will take you down. Eventually. Maybe. I guess the thing is, the government here sees pot for what it really is - a mood altering substance that is less harmful both in the long and short term than alcohol is. It's not the devil, it's not cocaine or heroin, but it isn't oregano either. It's a drug, just not really that bad is all.

I have heard of people going to prison in the states for possession of a personal sized amount... to me that's just lunacy and a waste of taxpayers money.

Prison for possession of a gram is the way of the midwest and the south. For the west coast, you can't get ANY jailtime if it's under an ounce. Pretty similar laws to BC, I'd imagine, except we're stricter on growers.

Prostitution is totally legal in the UK.