Poor moped army posters. Harold is bringing in changes which will allow him to permanently banish any criminal offenders who might want to say something like, "There is no need to disconnect your oil injector." This oughta turn into a real valuable forum, eh?

Even the former leader of your United States of America, James Earl Carter Jr., thought he saw a UFO once, but it's been proven he only saw the planet Venus.

Venus was at its peak brilliance last night. You probably thought you saw something up in the sky other than Venus, but I assure you, it was Venus.

I know what I saw.

Your scientists have yet to discover how neural networks create self-consciousness, let alone how the human brain processes two-dimensional retinal images into the three-dimensional phenomenon known as perception. Yet you somehow brazenly declare seeing is believing? Mr. Crikenson, your scientific illiteracy makes me shudder, and I wouldn't flaunt your ignorance by telling anyone that you saw anything last night other than the planet Venus, because if you do, you're a dead man.

quite possibly the best episode ever.

Have the aliens over for dinner, pour the wine to them, loosen their lips, they'll tell us what we need to know. We love you .. We love you" they will say. We will be left to wonder if it was just the wine talking.

who cares about your inane bullshit? this is about an awesome x files episode that should be brought back to the spotlight.

If you believe in mind control and think its gonna happen get some alum. or tan foil. But in fact mind control and not be used thought the Internet. People may think that there minds are being controlled when they use the Internet allot but in fact its not mind control at all. So there is no way that Harold even with how smart he is with his computers and shit can control any ones mind. The only way to control some ones mind is if you can find the same wave link that the person's mind is running on but not all brain waves are the same. So its close to imposable for Harold or any other person on this forum to control any ones mind.

I got mind control over Debo, he be like, shut the fuck up! I be quiet, but when he leaves, I be talkin' again.

Did somebody say Kimbo? Kimboooooooooo

wow you just keep on getting crazier and crazier dont you targadouche? 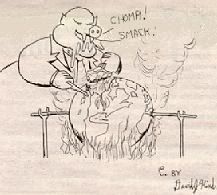 _As a past vegetarian who now eats meat with a clean conscience and awareness that it is overconsumption of any good thing that causes health and environmental problems and not consumption of the item, I was strongly offended by the cartoon on page 4 of the September 1996 Peace and Environment News, which depicts meat eaters as pigs. I see the cartoon as an indication of fascist dictatorship which has no place in a responsible publication dedicated to improving the quality of life in our society._

I just respond to necessity

Yup .. necessity, Harold. You're losing it, old friend. Wake up and smell the roses. Get out of whatever it is you're in that made you such a freakin' control freak. Please. Do yourself and the forum some good.

that dude is serious business!

Step in line, do the step, goose.

« Go to Topics
Sorry, you can't reply to this topic. It has been closed.