Hello everybody, noob here. I was leaving the local Goodwill store after scoring some killer Hawaiian shirts, when i see this F150 cruise by on the way to the donation station. In the back of the truck was an old washing machine and a moped. I drive my Exploder around the back of the building and catch him just as he was unloading the ped to donate to the Goodwill worker. I rolled down my window and asked the dude and his wife if they would sell it to me. He said it didn't run, and didn't know how to fix it. I said it was no problem, I'd get it running. I gave him $20 and got the name and phone number of the grandpa that owned it and let it sit. Threw it in the back of the Exploder, took it home, cleaned the crap outta the Bing, threw on a cheap inline fuel filter (rusty tank) and it fired right up! I was stoked!

I don't think so. It has CEV headlight, tailight, and switches.

holy cow I love moped find stories such as this one.

congrats, and have fun..

Aren't moped stories the best. I suggest a whole Forum completely dedicated to stories such as this one. Treasure hunting bro, fucking treasure hunting! Indiana Jones and the Crystal Ped and shit.......sick

That's good. I scored a Sachs Westlake in someone's garbage once.

I was on my way to work and I get a call on my cell. It was my mom. She said, "The Reed's threw out an old moped. I figured you would want it."

I turned around and headed over to my mom's and picked it up. Got it running in like 45 minutes. It's still running to this day.

I got my first puch for $20 too.i went to a friends house and saw it in his backyard.I asked him if he would sell it,he said give me 20 bucks and its yours.it was sitting in his neighbors yard for 25 years untill the old lady gave it to him,then he bought a new carb for it and let it sit untill I found it. It was a 15mm bing.

Congrats dude! Deals still happen and I'm waiting for the next one!

My favorite Puch to ride is one I bought for $25. The local motorcycle shop calls me whenever they get a moped, before I came along they would just go into the dumpster. We're both happy.

This is one of my first posts. Do I need to have a few more to post pictures?

Oh yeah, why in the world would ANYONE throw a moped in the dumpster!

Yeah, you can use photobucket, but remove the

Cool. Doesn't show my descriptions though :( 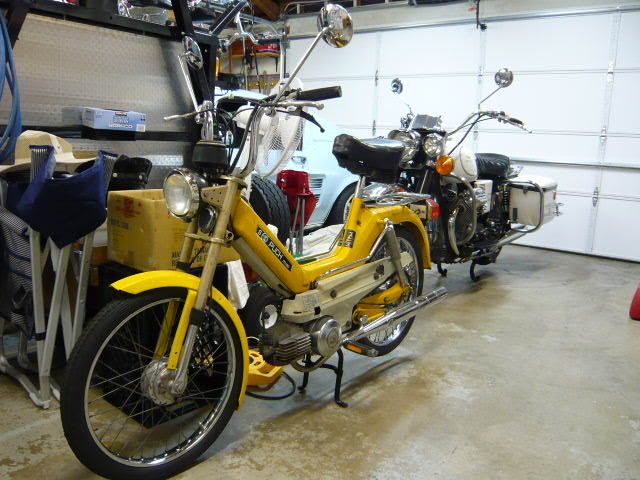 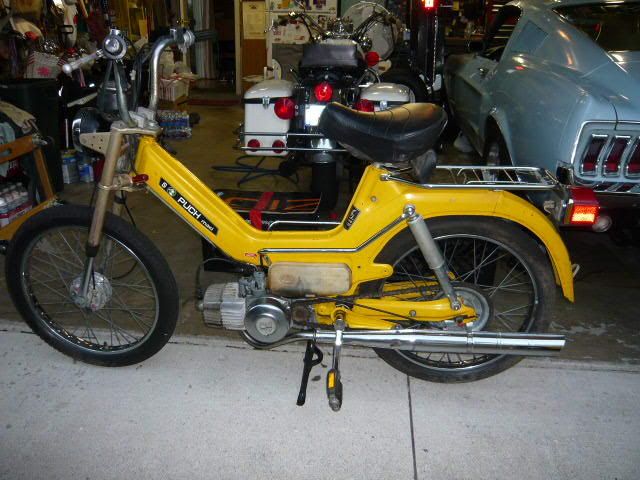 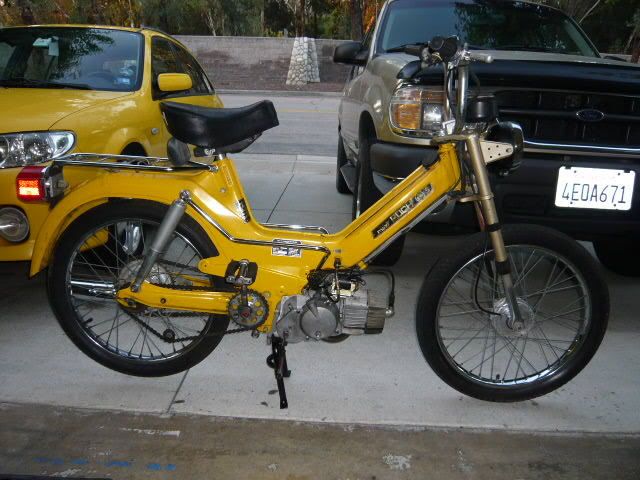 I've cleaned it up since then and changed the tires and tubes, spraybombed a fender that I paid too much money for, used steel wool to clean up the rust, and enlarged the holes in the baffle. Still does a little over 30mph with me on it. Gotta spray bomb the forks and get it registered.

Dang...I somehow screwed up my last post. Anyhow, I've changed out the tubes and tires and cleaned up the rust on the chrome. Drilled out the baffle, spray bombed a fender I paid too much for, etc. Runs good.