Sometimes, I think I'd love an egg-launching device mounted to my bars. It would have to throw them a good 50' level, used for only the most special of occassions - preferably, of course, when I could get away with it.

It would be hard to keep the eggs intact unless they were under top-to-bottom compression and didn't have any chance of getting hit otherwise. Then, I might end up with egg all over my face.

I carry eggs in a bag, and just throw them by hand. Rarely ever miss. That's from a bicycle. Haven't tried it from a moped. Sounds like it might cause an accident.

More accurate, to be sure. Hell, I threw all of 60 on a gun at Dave & Buster's the other week, and have thrown 66 previously - just slow enough to be a major-league "Bugs Bunny curveball", but not bad for 5-8 and out of shape. I could probably get a very good whip on an egg. Good idea Jerry, thanks!

Fuck that. Don't bother with eggs. Potato cannon. You can crack through a quarter inch thick piece of plywood with one you just slapped together from ten feet.

Imagine what it'll do to a windshield, or a person's face.

You have some scrambled thoughts Birthday Fellow. Perhaps a nice egg latte would calm you.

Maybe I could get a second AirZounds and have an air horn egg blasting device. Imaging such a thing makes me chuckle. WHONK (splat)

Throw eggs at what? You know that shit can fuck up a cars paintjob, right?

yeah jax, but if someones getting on your ass, or fucks with you on your ped, then fuck their paint.

Awe you mean a "spurge gun." 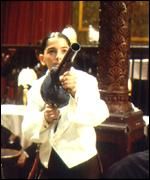 True about the sealing problem. But, consider the shotgun. Those little lead pellets don't seal against the side of the barrel. The secret is wadding. Crumble up a piece of paper, and stuff that down the tube.

On that same note, who cares if it's broken or not? Again consider the shotgun. You're not going to make an egg-sniper rifle. So a whole egg flying through the air is not going to be very accurate. You're unlikely to hit, and if you do, it's going to cause some damage as it shatters.

Your going to have more egg on more faces that way.

Custom made egg sabot rounds are the answer. These will both support the egg on all sides (rear support only, as suggested above, would simply blow the back of the egg through the front) AND it would accelerate the egg to absurd velocities with decent accuracy (as decent as one can obtain from an egg). If you want to get fancy you could affix the sabot pieces to the gun itself so they just hung from the end of the barrel after each shot. This would be a single shot device pretty much, and youd likely need a short rod to reload the sabot into the barrel, but it would probably fire quite well.

I'm thinking more - "if you just truly put my life at risk through inattention or willingly so, then here comes a friggin egg for ya"