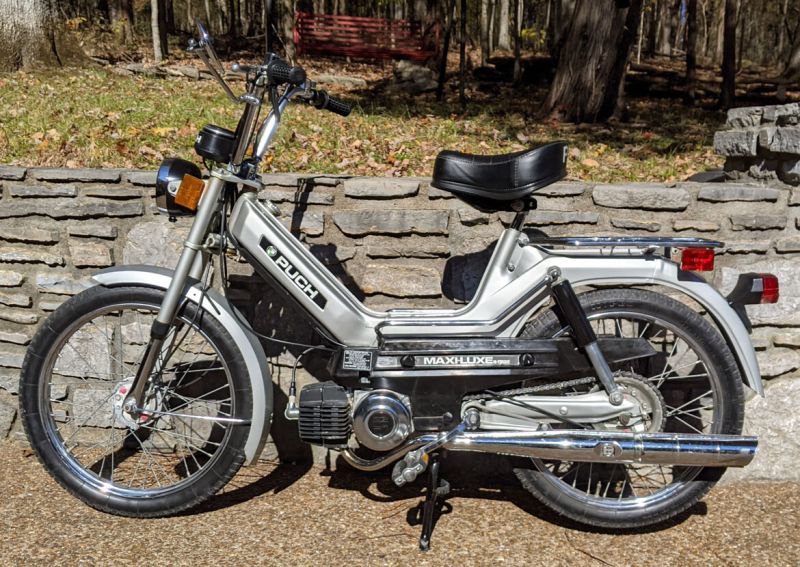 It started with a ¼ kick and would sit and idle at about 1,350 RPM (set with a General Technologies Corp TA100 Smartach+) as long as I needed it to.

I suspect the bike was originally a 1.5 HP model but has been modified prior to it being given to me.

I do know that the bike as given to me had:

I recently had access to a new Bing 14mm carb and against my better judgement I swapped the 12mm Bing for it.

I’ve got some jets coming this week and also the Uni 20mm air filter that several vendors sell.

I suspect the original exhaust was modified somewhat (as well as other things) to get that 30-31 MPH speed.

Here’s how it is now.

There are three vertical drill thru holes in this inner exhaust pipe.

There is a 6mm rod welded to the end of the inner exhaust pipe and bent down to allow the “Dampening Insert” to be attached inside the “Silencer Cover”.

When attached the front of the “Dampening Insert” is about 1” from the rear end of the inner exhaust pipe.

The front end of the "Dampening Insert" has a 6mm hole allowing it to be put over the 6mm rod that is welded to the end of the inner exhaust pipe.

The rear end has an approximately 10 mm hole.

When assembled an extruded washer goes into the endo of this tube forcing all exhaust gas to exit around the 6mm rod and through the two 8mm holes. 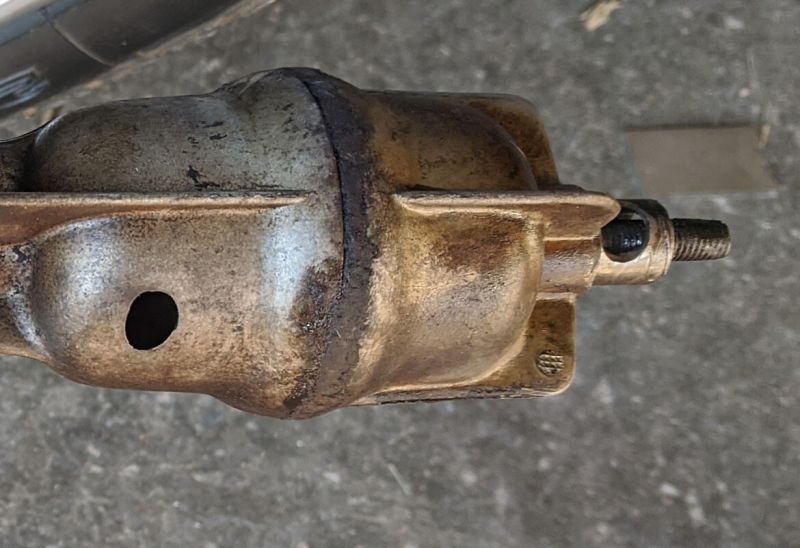 It would seem to me that asking those two 8mm holes (with a 6mm rod through the tube) to get rid of all the exhaust is pushing it, especially with the new 14mm Bing and Uni filter.

I really don’t want to go with a custom pipe with stock cylinder, etc. and I have absolutely no desire to “kit” the bike.

Has anyone had any experience (positive or negative) with adding additional holes in the rear faces of the “Dampening Insert”. 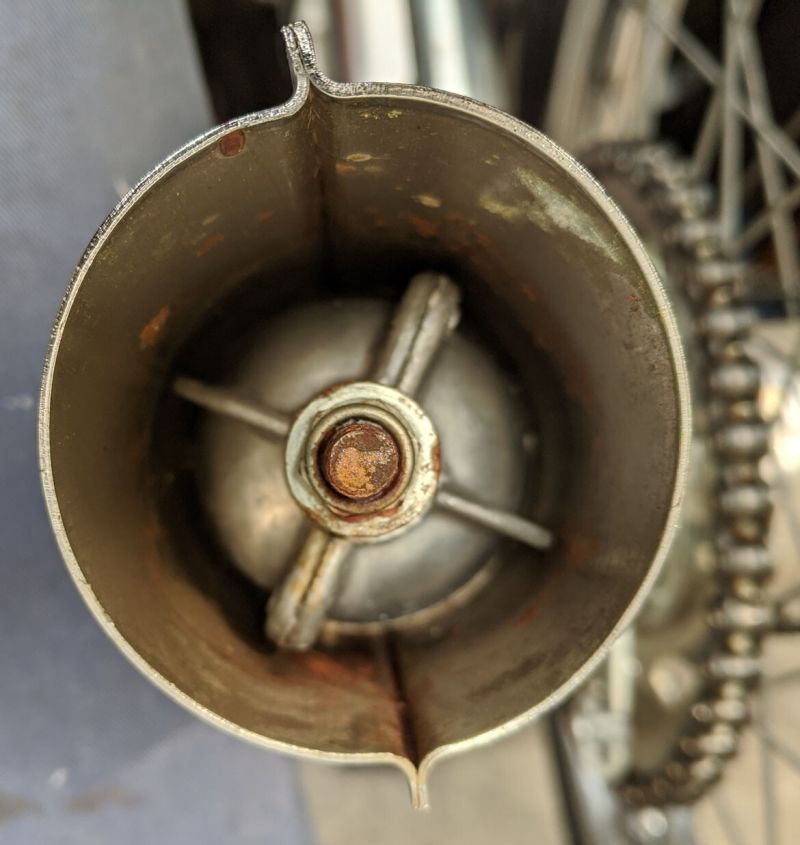 This would allow more exhaust gas to exit.

I’m aware that there is a need of some “echo” waves to push the fresh charge back into the transfer port and into the combustion chamber.

And experiences with modifying this stock Puch system that proved favorable would be greatly appreciated.

I tried making some holes in the stock baffle of my maxi. It went louder, not faster.

The stock exhaust is mostly just about making quiet, not power. If you want any performance gains, get a pipe. I thought the chrome Boss pipe looked natural and gave a real boost (up from 30 to 35 mph).

Ya the hell with the stock maxi exhaust is not an expansion chamber so it is worthless, as well as the thick head gasket, 12 mm carburetor and intake mist 1.5 ho have.

If you want to be a dumski and run the stock stuff enjoy being slow and being a hindrance on the road creating dangerous situations!

Your best bet is to make your bike go 35 to 40 mph to keep up with traffic which includes tuning your clutch, getting a halfway decent performance exhaust, 14mm-15mm intake and 14-15 mm carb though stick 12mm carb may work with upgraded intake, exhaust and clutch,

Now a stock magnum exhaust on the other hand is not bad.

If you get one of those you could put it on your header, with one 5/16 in hole drilled through inside you could probably achieve ok performance to its partial expansion chamber design.

Everything you have there looks stock. I would not mess with it further. More holes in the back of the baffle will likely hurt performance and sound way loud relative.

Look at Myrons web site for Puch speed versions and a bing chart to get your jetting started on the 14MM. The wiki has good info too.

You can even hide a more high flow filter under the side cover.

Keep it stockish. Nothing wrong with that.

You can add a few holes to the aluminum 'balls' structure. If you double what's there in San opposed fashion, essentially drill holes opposite of the existing ones at each chamber.

It's really a fantastic design, using chambered resonators to damp the different frequency.

The biggest thing is keeping it clean, yours either has super low miles or was cleaned up, that helps a lot. Modern 2t oil will keep it from gunking up, but most times you get them and they are plugged.

The 14 will probably help some but you will want to get the right parts to set it up, look at Myron's mopeds for the correct atomizer, needle, slide and jet.

Really nice looking bike. Myron's also has details on how to turn your 1.5hp into a 2hp and keep it totally stock. You might get 32 tops. One of the mods is removing the cross pipes in the holes on header part of the pipe you show in your pictures and it looks like that may have already been done as well as the 16t on the front. You can run without a head gasket if you have a good seal. Other than that, a clean chain, tuned clutch, and re-greased wheel bearings are about your limit. It's a big change for a mile or two per hour, but you could go 16x40 gearing. Your takeoff would suffer, but you might get to 33.

i have had good luck drilling more holes in the *balls * part.

drill holes opposite from the original holes. 6 more maybe?

go the the hardware store in the mower dept. and get a paper air filter for

a Tecumseh lawn mower. its shaped like a tube and will fit the Bing.

plug the open end with a cork.

run without a head gasket if you can

you may have to Armstrong mill the head a little

but your Puch will be fun again

the low end takeoff should remain the same

Thanks to all for their input, I appreciate it.

I do have the 14mm intake with the rectangular port end.

Obviously (going by those who have done it and got benefits) drilling additional holes in the balls helps but I'm trying to get an understanding of how that helps when ALL exhaust gas must enter and leave through the two drill thru hols in the tube that has a 6mm rod going through it.

I guess my dilemma is why add more holes in the balls to get more gas through faster to be throttled back down by the two holes in the end tube.

Again, based on your experiences I am persuaded it works without doing anything to the end of the last ball I just struggle to see how.

On a similar vein why drill holes in the inner tube or take the constricting tube out when everything still has to get out that final (constricted) tube.

Well, you seem to be a thorough person and if you want to know answers to these questions, I recommend reading some 2 stroke history: http://www.amrca.com/tech/tuners.pdf

Since your stock exhaust has no way to produce the same effect, your best hope is to reduce back pressure a little and allow better scavenging of the exhaust gases without blowing your mixture charge into the pipe. There’s a limit.

As the exhaust gas moves through the chamber it cools so it can move through a smaller hole at the end. There are two effects, sonic and gas flow. The resonant chambers are absorbing the Sonic energy and dissipating it. The small hole is plenty for the gas flow at a constant rate with reduced energy. Even performance pipes have a greatly reduced stinger, not exactly the same thing but it's similar.

I've built a couple stock exhaust maxis that went 35+ (one was over 40 with high gears) ditch the head gasket, run the 14 carb, mod the exhaust, 16*45 gears, a little bit of porting can do wonders, but the biggest gain is making sure that the bing gets re-tuned to the correct calibration for the 2 hp parts. I think they run better with a stock filter that's been derestricted so you can use the stock tuning parts. If you ditch the stock filter the atomizer and slide will be way wrong and it can be hard to find the right combo.

Bings are kinda touchy, even a little bit off and they will have a huge loss of performance.