I'd really enjoy hearing everyone's story on their first moped. How you got into it, how you found it, what you paid for it and your first ride. Where did you go? Did you have any problems? We're you in love?

Pretty sure I was like 10 or 11 and my buddy had a sweet Kawasaki kx60 and a honda express. He would ride the kx and i would tag along with the express through the trails. I was super small so the express actually went pretty good through the woods. Around here most kids had honda express as woods bikes. I remember finding an urban express in the local sand pits all painted up and just destroyed. I walked it home a good mile or so through the woods home and messed with it a little but never got it going. I wasn't aloud to have mini bikes or go carts and had to hide it from my parents and try and work on it when they weren't home. It was fun to go to friends houses that had three wheelers and bikes. They always had a spree or some shit I could beat through the trails while they were on a trail bike or wheeler. I was super happy to ride anything. Think that is why I have so many bikes and wheelers and anything I can ride now.

That is awesome, finding a moped and taking it home. I wish I would've known about these sooner! They are Soo amazing

Had alot of bikes but the first one I actually had legal on the road was the one on my profile pic. Was given to me bone stock and pretty much new and not ridden. Was a fun project and traded it off for another beauty that I sold off. Wish I had them both still.

This is my first moped. 1977 Puch Maxi S 1.5hp. I got it in 1978-79 with the help of my Gramp. I don't remember my first ride but I remember my Gramp riding it and smiling his ass off. He would have been 70 at the time. They were the rage where I live in the late 70s and 80s. I think it was like $275. I resurrected it after it had been mothballed for 35 years after a good friend crashed it into a chain going across the driveway to the parking lot of our rival high school in 1985 or 86. Broke the throttle control, speedometer cable, headlight, tailight, throttle cable., bent a rim, and busted a spoke. When it started up for the first time again after spending a month cleaning the tank and putting it back together it was the highlight of my summer. I've had such a blast getting back on this thing and my kids have too. I've put about $500 into it to get it where it is now. Worth every penny. 9,000 miles later the bottom end needs to be rebuilt and I'd like to get new forks, but it rips way harder now than it did in high school. Got tons and tons of excellent help on this forum and New England Mopeds and Lovers of Puch Mopeds on FB. (edited)

Just out of mothball...

Yup, '07, a blue and gold Tomos Targa LX I got off a friend. I rode around all of Newport News with it, for as long as I could. Ran out of gas as I was pulling up to my house.

Not a true moped , my FA50 was found on Craigslist about 13 years ago .

I drove an hour and a half to pick it up and paid $135 for the privilege of owning a non running pile of Suzuki that we pulled out of a barn and loaded onto my Dakota .

After the fun of restoring it , the first ride was a pleasure I hadn't really felt since I was 14 when I bought my Simplex .

Been riding the same bike ever since , with only a single , self imposed problem .

Restored : ( the windshield and rear box are no longer on the bike ) 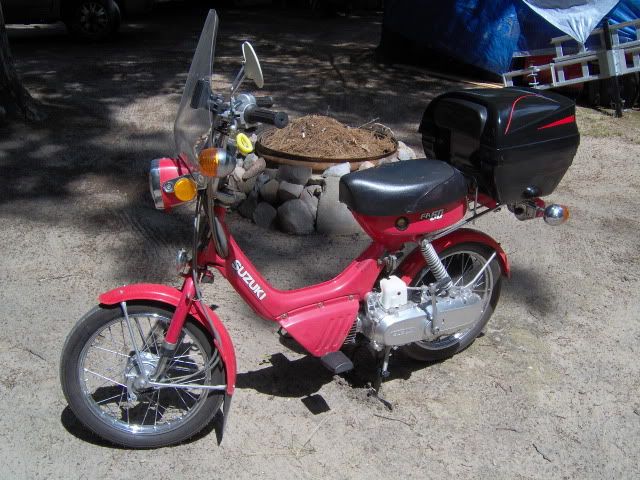 Got my first bike in like 07, it was a yellow pinto that had the PO had bought brand new and got most of the accessories. It had the pinto saddle bags and a front wind screen. Took it around the block from the consignment store that was selling it after the PO's death. Everyone around that town knew the old guy and his pinto as he rode it around often. But my first ride I was smiling ear to ear and almost ate it on a slippery turn, but I was hooked. Best $480 I spent on anything up to that point!

And honestly i dont feel like i had ever seen a moped in person and probably had confused a scoot and a moped before i found my pinto. So i still have no clue what magical force directed me to the land of moped.

Just published this in Rider Magazine, on this exact subject: https://mklsportster.com/wp-content/uploads/Rider-Moped-Dec2020.pdf

I brought a Honda Cub when I was in 8th grade, not a moped but I thought it would slide with the cops as one, I got a ticket for no registration. It was actually a Trail 55.

It wasnt till some years later that my buddy found a 65 Wards Benelli moped in the dump and swooped it for me, I got it running and loved it. It was my first real moped. Had alot of fun times on it.

First ride and first moped were 2 different events, first ride was on a red Pinto, my neighbor got it, I was 13 or 14, was instantly hooked, but I got reamed for it, by my mom who thought I would for sure die on anything with 2 wheels and an engine, (she had obviously never seen the stunts I pulled on bicycles) and my dad for riding it without a license. Then got into garage sale yz-80's and had to hide them as I would never be allowed to own one, much less raise hell on the streets with it as I did, only good thing about that was when the cops came looking there was never a bike on the property. ;) But then at 15 I had earned enough money to by my first moped, a red '78 50v, I think I paid $500.00 for it used, not so bad as it was '83 and they were still pretty "new". I rode the living shit out of that thing, unless my dad had it, he loved it too! Best thing about it was the long seat, you could take girls for rides! :) I have had either a moped or motorcycle of some sort ever since, and can't imagine not, even though I don't ride as much as I used to.

The first moped I ever rode was a friends Ducati Cuchiolo ( I know I butchered that spelling) . Only rode it around the parking lot, still it was fun.

What I would love to at least ride is a Vincent Firefly, now that would be cool.

Got my first moped, Baretta 38, when I was 13 years old. Friend owned me $40 and gave me the Baretta for payment. Got snowflake mags from another friend for it because the spoke wheels were toast. This was way before the internet (I'm in my late 40's now) but my dad was in the Navy then and helped me score some go faster parts for the V1 motor while overseas. I had that moped until my mid-30's, when it eventually died from a crack in the engine case. I sold the go fast parts and ended up scrapping the rest for parts. Had a PUCH Newport at one point then someone introduced me to the enemy, a 2-stroke Yamaha Zuma. I'm gay for scooters now/still but may pick up another 'ped one day. (edited)

‘77 Jawa Babetta, bought it used in ‘78 at a flea market—$50 because it wouldn’t run. My Dad sprung for a trip to the dealer who installed another of the famously bad coils, but the damned thing just ran badly and fought me until a friend told me to pull off the silencer/muffler. My first ride got me hooked, but didn’t have it for long—it was so loud that I had to sell it to keep the neighbors happy. A Maxi2 I had in college hooked me for good, though it took decades for me to get around to replacing that indestructible Puch. Mopeds are time machines for me, and all but one have come home the same way—not running. Kinda glad they’re such pains in the ass, otherwise I probably wouldn’t have had the chance to buy the ones I have

71 Puch it was 1989. A penndot worker was gonna sell it to me for 100 but once he actually went to do the deal he just gave it to me it had two flats didn't start no paperwork.

The first one I ever seen was a neighbor's white motoguzzi robin. 43 years later I could buy it I know where it is.

In 02 I found this site, I was 13 and instantly latched on. Probably my autism but when I get into somthing I go harrrrrrrd.

Eventually found a red 50v for $300 in great shape with a stripped exhaust and got a nos top end and exhaust from mopagen. Sweeeet bike! My first ride was around the sellers property, I was hooked..

About a year into owning it the engagement lever assy on the driven pulley exploded at 35 sending the arm several inches into my thigh. That hurt... I then stored it under a tarp for a few months and everything degraded. Dum

Posted it for sale cheap and I met an older fellow who came by to buy it. He passed but he took my number....six months later he called me up, you wanna buy my Magnum?? I declined and told him I couldn't afford it. He replied $400. And screamed yes!!

I went to pick it up and was greeted with 4 nos hobbits. 6 great maxis, and a pretty good Magnum sitting there...ride the Magnum forever...miss that bike

a few "firsts" really. the actual first was a maxi in my neighbors garage when we were like 10. We bombed it through the woods and my head quickly populated with ideas and dreams of being able to go into town to get sodas and jolly ranchers whenever I wanted, the dreams of freedom. my neighbor and brother totaled it into a rock pretty quickly tho, but the concept never left me.

Then after highchool, I took a year off and built elaborate plans around touring to cape cod on a scooter and working summer gig jobs, but the scooter I bought turned out to be a scam and it wasn't til after college I bought my 1st scooter (eton beemer, zuma clone). I almost crashed it while test riding but quickly it became my primary transport and I loved it, it was all I dreamed of.

Then when I moved to ATL for grad school I got a tomos sprint, when I first got it running I was pretty pumped but quickly that was dashed as the carb clogged. repeatedly. in etospect I just needed a fuel filter but it was so regular and frustrating (and the carb under frame so a PITA to deal with) I actually just sold it and kept the scooter. I later got back into mopeds after my scooter got stolen and it's all history from there.

I even went back years later and fixed that 1st moped at my neighbors and let my nephew ride it around, I love mopeds.