Full rigid free spirit was probably the most uncomfortable bike I ever rode (I had a 70 reed kit, boss, and 15bing on it) but so so light and nimble. but I’m rebuilding a Solex and a maxi N right now. Can’t wait for the discomfort again, gimme all of it!!!

that kitkat is siiiiick. looks totally worth the pain.

tom of the swoops is a pilot and has a kitkat, i think he has flown with it or at least intended to.

> > of transportation. They were never designed to be fun to ride.

> oh yea, not disagreeing. they fit their niche. it's just fully failing

> to align with my interests, it's like a big heavy less efficient bicycle

> slow you both uphill and down. I deeply adore oddball and garbage

> mopeds, and very much appreciate riding even pretty junky bikes, but

> solex misses me on almost all counts.

> I was also just talking about moby 7's recently, i've never ridden one

> but beyond being a pretty awful seat, small, and rigid rear (with the

I have a "7" it is pretty sketch, the seat is surprisingly good however. A good machine for well paved back neighborhood roads, would be better if I weighed less! :D But one of our civic eating potholes would total it.

Prima 3 with shorty lowrise bars just screwed your back....

How do you even stay on?

I fogot about the Kit Kat. Italjet was obviously joking when they made those. I have owned 3

lol was that chad shittington's?

A Peugeot 103 saddle seat has got to be the worst ever. There is a bar on the back edge, that digs right into your ass. As for long seats, an earlier Tomos long seat, and the Pacer P-78 Sport seats suck. 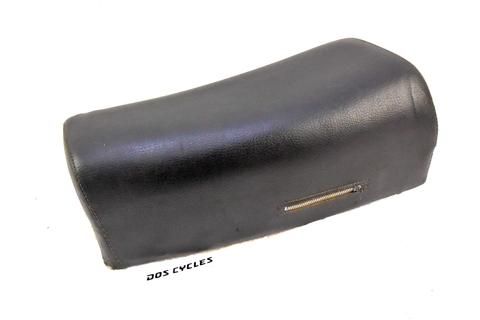 I got a HUNCH this is uncumfortable

> I got a HUNCH this is uncumfortable

Actually , the seat itself ain't all that bad . But , the way he has it set might be a disaster .

The most uncomfortable moped I have ever ridden was the Raleigh Wisp. Not only was it uncomfortable, I always felt that I took my life in my own hands every time I rode that ped.

and I want comfort?

For a couple bucks u could upgrade to this.

> and I want comfort?

> For a couple bucks u could upgrade to this.

Not to mention ugly too!

The one you are walking/dragging home....

The fuctupest design ever, 3 wonky springs like a baby playground toy. A spring seat should have 2 springs with a front hinge to control it. Plus the ride feels like a high side in a turn.