Is the Honda Supercub the best two wheeled vehicle in the history of the World ? If so what is second ?

Not by a Longshot. But it is the most produced vehicle of all time.

I would say the CT is better than the cub, it's tougher and still gets crazy high mpg.

They are 4-stroke, so hence they can't be the best 2 wheel vehicle in the world.

I began my moped career riding a supercub. i'd had others but that was the bike that won me

the fact of it's being most produced is pretty telling - it's the most demanded, it's the perfect fit, simple reliable inexpensive and very capable to fit many international markets, where being able to cheaply zip through tight city streets highlight it's accolades.

beyond that, look at almost every sub 150cc manual or semi-auto engine out there, they're all derivative of the cub and many are direct clones - the "lifan" engine power the vast majority of imported pitbikes and small atv's

I loved mine, I rode it almost 20000 miles myself having recieved it at 8k, all with relatively little maintenance, average speeds up to 40mph, easily transporting 2 people and a load of extra junk too, and at times pushing gas mileage over 150mpg. that's a badass motherfucker.

But the best? there can be no best overall. a wise frenchman once told me "the best wine is the wine you like best" The cub is my personal favorite vehicle, but if I could only have 1 vehicle forever, it lacks the speed, range and carrying capacity of a bigger bike. It can still shred offroad if you're willing to have some fun but it'll never perform like dedicated dirtbikes or enduros. It's a perfect fit for low cost inner city transportation but can't do much beyond it, or at least not as well as other options.

Still, if I put it one on one versus any other 2 wheeled vehicle, it's impact and influence and my personal adoration will put it in the winners slot every single time.

I also strongly disagree with the transmissions being a weak link, they're extraordinarily simple, the semi-automatic is very approachable and easily learned and enables one-handed riding, and it's very robust. theyre notoriously bulletproof motors. I've had cubs fail but any transmission issues have only ever been an issue on the cheap china clones

> I also strongly disagree with the transmissions being a weak link,

I've ridden 3 up, and without oil. You'd have to run it over with a truck to really break it.

I found a passport 70 in a field, it had a 1987 registration and 17000 miles. I put gas in it and changed the condenser and it started on like the 10th kick. All of the plastic was trashed and the seat looked like a dogs chew toy. The tires even held air. Best 20 bucks I ever spent! Honda...

Best 2 wheel transportation will be a honda. Legendary reliabilityand innovation. My favorite was my rc24 aka the vfr750f best sounding bike (in my opinion) that v4 with the gear driven cams was a torque monster, and narrower that an inline 4 so nice skinny profile bike.

The Honda S90s of the mid 60s were also great bikes ,small ,fast and typical Honda reliability. Many of my friends owned them,paid for by money made with their paper route . I’ve been looking for a decent one to restore, their expensive and getting hard to find

My current collection of small Honda motorcycles.. All are reliable and fun: 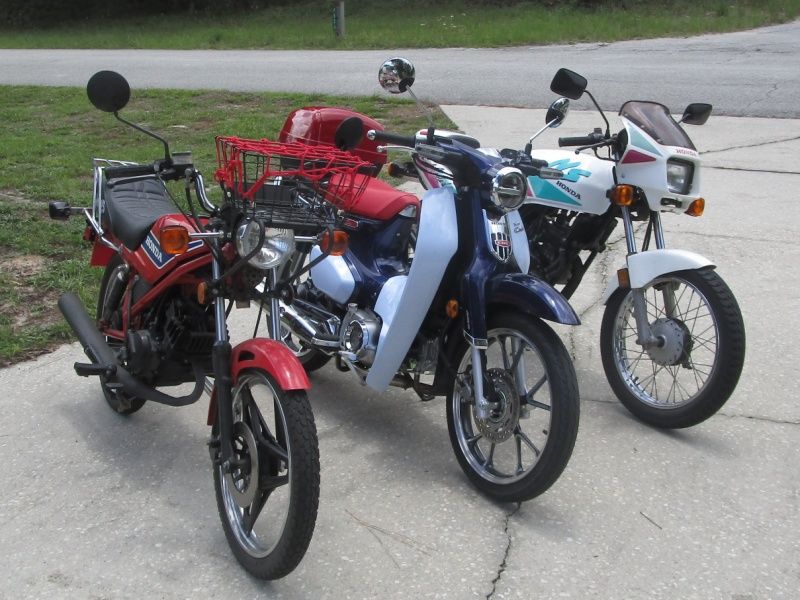 tbh im pretty jealous of that new cub. I can't really justify owning one for the cost of new, but i can definitely appreciate how nice and convenient they are. and pretty.

I've had a few cubs and an s90. I really liked that s90, it was the first motorcycle i ever rebuilt. bought it in a box of parts from briton bees, that was when i learned excactly how much more difficult it is to put something back together that you didnt take apart.

I’m thinking about buying a new Supercub ,they are a work of art the fit and finish are amazing. I’ll get this Balboa running and see how wellI can handle it at my age. You picked the right bike to learn on and get addicted to these iconic machines. I can tell by your posts your very knowledgeable and motivated with this Hobby.

My dad bought the new monkey, its tits. Funny enough my gorilla (the smallest bike) has the biggest engine a 155 Ho pitster pro. My bike growing up was a ct90 great little bike, drove the hell out of it and always started first kick.

Those are some awesome bikes you keep your stuff in nice shape . I went to a local Dealer hoping to check out a Cub ,didn’t have one but had a red monkey. I thought that bike was fantastic and it just felt perfect to ride,they are really fast. Where does your Dad ride ? Thanks

Texas hill country, the new monkey is based off the grom so it's pretty big, probably double the size of the og monkey. The new cub is cool too, wish they would come back with the trail 90.

Some of the Supercub guys are now lobbying for getting the Cross Cub in the USA. I am not sure there is a Cross Cub 125, but here is the Cross Cub 110. I like the 110 because it has a kickstarter.. 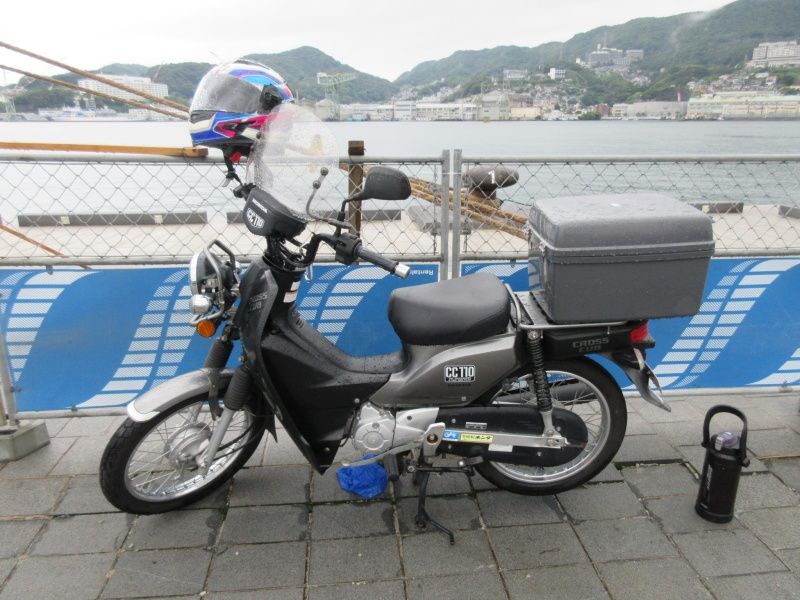 The CT125 Proto/Concept was unveiled at the moto shows this year. Whether this will make it to production or our showrooms is another story, but it's fairly awesome.

^ yes please, going to the motorcycle show in MN this year, hope to see that!

Wow that is impressive. In my many years I’ve heard few if any complaints about any Honda product.Their lawn mowers,snow blowers generators,root tillers are all quality

and their boat motors are arguably the best.One thing they do is put a petcock on most of their motors,seems like a small addition but solves a lot of problems. I might ad there a lot of quality products out there though.

Always wanted a Honda trail bike but every time they come up for sale I am broke!