> Night riding wasn't too safe on bridges and tunnels. Let's see your LED

Please show us what it does at night . That's where it counts .

Is that okay bob ?

I’m using a led h7 car bulb in a motorcycle headlight housing on my kinetic. 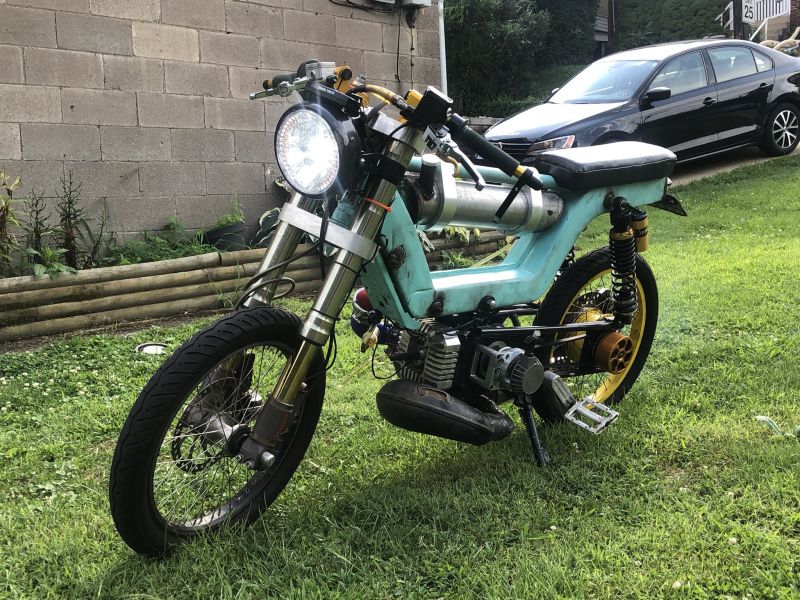 On my ciao and bravo I’m running these led fog lights.

How about 6V LED? So hard to find decent stock bulbs, they blow out so fast.

Sweet, is that the one you order from TV? That is really impressive!

> Sweet, is that the one you order from TV? That is really impressive!

Quick video comparison with lights off, running lights and high beam on at night

> How about 6V LED? So hard to find decent stock bulbs, they blow out so

^^^YA or is the wattage to low on the bulbs your using? I am very green with LEDs but I feel like the diodes burn up when there is nothing to control the amount of wattage they are receiving. On a separate note, I am very happy with the 5watt dimmable house lights I have modified to fit in my Puch Macho. They actually are bright and are able to run off the 10w 12v Coil from a HPI Internal rotor.

> Quick video comparison with lights off, running lights and high beam on

George I am def asking Sean to rig up a similar setup for me on my Magnum sometime this winter. You gotta text me the parts / battery info

> > How about 6V LED? So hard to find decent stock bulbs, they blow out

its not a matter of running 6 or 12 or 4v. yea you can run dual voltages if the led has a driver. (a driver is a voltage regulator.) leds last forever when run dc. dc means you need a cap. pulasting dc will blow led's too. simple theory e=ixr. as long as e is regulated properly than current is regulated.

there is an elecronic part that does not pass dc, it stores it like a battery. it also allows ac to short out to ground. ac passes through this device. its called a cap and you need one with led projects. always use the largest cap for cheap. size matters.

some led's come with internal driver electronics. these bulbs are expensive and the electronics usually suck because they are designed for e bikes that have a battery and not a magnito. this type of bulb is to be avoided.

since I studied ee I can do things dillon can't do. the 3aaa battery led projector works. its sick how little I spend on 3 aaa projects. all the 3aaa crap has a blinky board. click once twice or three times to toggle between blinky modes the board has no function for a moped and the electronics and will fry quickly. the solution is simple. bypass the blinky board by cutting the wires from the board to the led. then just use the led wires. found this one on ebay for 2 bucks. the 4v drver is a voltage regulator that previously had no moped function. the emitter follower regulator uses as much power as it regulates. no worry with low current led's. found this beauty by doing the ebay search "800lm headlight aaa" 2 bucks! this search worked too "1000LM 3Mode Q5 LED Zoomable Headlamp AAA Head Torch Protable Headlight"

blinky board cut out and testing for polarity. 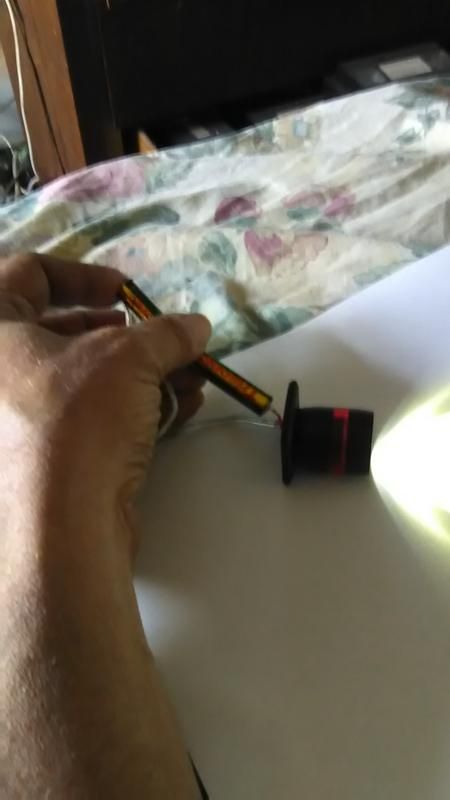 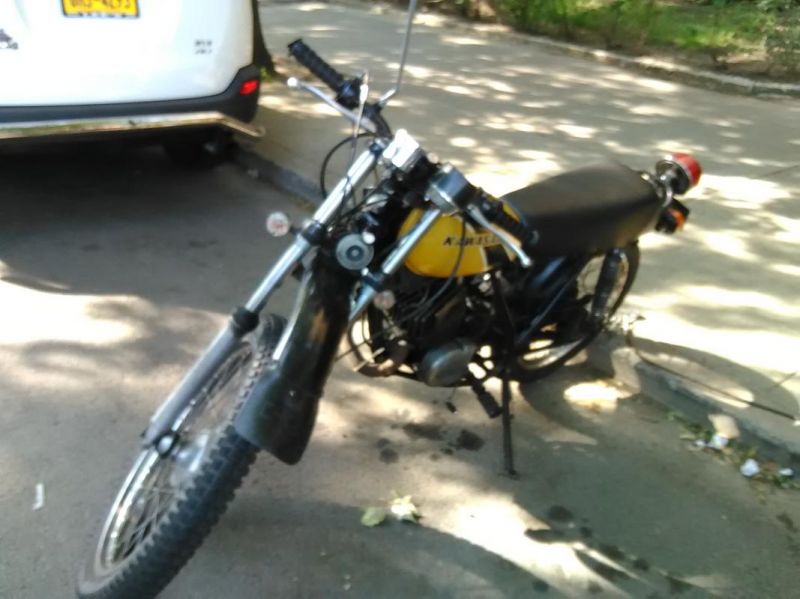 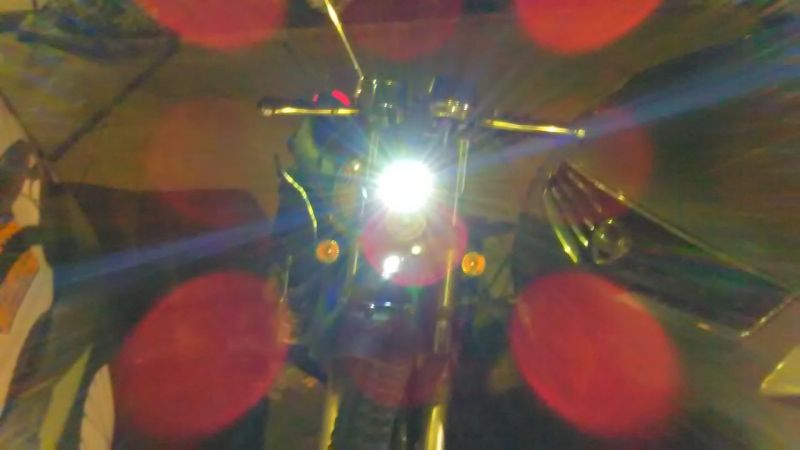 Your idle is v high.

Not a bad output, but the optics seem to be not very homogenized. A la the weird strip of brightness pointing straight down

Yes, I am idling high, got to work on my timing. I also have to tweak the angle. But I am happy that I can see at night, it is much improved from stock.

Can’t you just wire a zener inline to get the same effect. I have done this on 12v bikes and ran 6v bulbs.

Cavalier, I'm only wondering if you're getting some light nearer the bike? Otherwise it seems fine if it casts way out there too. Thanks!

man you think you have seen everything then dillon gets more retarded. how can you possibly tell what the idle is from a still picture? my idle is stupid slow. its a 4v light on a 12v bike. it idles like the stock headlight is off. 3 aaa battery .5w vs 25w stock. it NEVER dims. for the electrically challanged try to run the stock headlight with 3aaa batteries. it won't do anything close to 800lm becuse it won't light at all.

>Not a bad output, but the optics seem to be not very homogenized. A la the weird strip of brightness pointing straight down<

no dillon its just a shitty cell pic. 800lm as advertized and the lens is adjustable.

if I was to do it all over again I would have siliconed the projector to the original headlight. (break the glass and remove filliment ). people are not used to the projector look. looks stupid on a bus too.

don't forget the cap. it makes dc led bulbs last by filtering out ac to ground. bigger is better. you need to run this part with your led conversions.

yes I run a Zener. but a tiny one. it drives the emitter follower 10a bjt transistor. costs less than a buck. but that's me. you need a minimum of 2 already made parts to run these bulbs. an r/r of the correct type (full wave/half wave) and a cap.

> Can’t you just wire a zener inline to get the same effect. I have done

hell no. that's not how a Zener works. the Zener works as a switch that turns on at the Zener voltage. they are not voltage regulators on a stick. so what would happen on a 12v bike with a 6v Zener inline. the voltage would be 12v at the Zener. its a switch that turns on at 6v and is off below 6v. what is necessary is a constant 6v voltage. this is done by using the properties of the bjt (old fashioned transistor) with the Zener as constant voltage.

the 6v British Zener regulators are really antique and are not available for cheap. these were wired as shunts. I want 10a for an output that's whats up with the cheapo bjt 10a transistor.

you should use the proper r/r and a cap.

I wasn't talking to you, I was responding to the OP.

If you wanna run your mouth, head over to the YouTube comments section.

> > Can’t you just wire a zener inline to get the same effect. I have done

> hell no. that's not how a Zener works.

that IS how a zener works.

the reason this approach is not typically used is that the zener will dissipate (in other words waste) the same wattage as the bulb. that means heatsink, and it also means you'll be taxing your electrical system with 2x your light wattage.

> > > Can’t you just wire a zener inline to get the same effect. I have

> that IS how a zener works.

> dissipate (in other words waste) the same wattage as the bulb. that

> means heatsink, and it also means you'll be taxing your electrical

> system with 2x your light wattage.

what a fucking dumb ass. I see no problem running an led that uses 8x less power through a driver that uses 2x more power. I call it progress and I've been saying this from day 1.

ken is right you can connect the headlight to + and the Zener between - and ground and the headlight will be regulated at 6v. my problem with ken gilbert's post is where are you going to get a Zener big enough to light a headlight. a 10a Zener is a 30$ part. bad choice of driver. stupid because can just buy a r/r for less than 10$ with the Zener already wired in and run the whole bike. head tail horn and all.

there is a reason why big Zener's are antique and not used today. its called the bjt. its todays choice of driver when used with a zener. costs less than a buck. or you

bjt or Zener you still need the big cap for long bulb life. gill you want to tell everyone to skip this important part?

> what a fucking dumb ass.

Get's told he wrong and immediately regresses to insults.

Just go back to the sub-reddit you crawled out of.

gill is wrong because the part he wants to use does not exist. zeners are not high power today. they don't make it because the transistor got invented.

Dillon has no clue and sticks to personal attacks. Where did I get it wrong?

You inaccurately described the function of a Zener diode, whether it is a modern answer to this problem at all. When Ken corrected you, you called him a dumbass.

Like I've said, over and over: If you don't own a moped, and don't plan on owning a moped, why are you on this site giving aggravated advice to people?

Your "answers" only prove to disassociate you with the community even further.

I have an inbox full of messages of people who want solutions to problems but don't want to post on open forum because of dumbass trolls like you.

ken did not correct me because the part he wants to use does not exist.

I give advise because I am have mastered leds. you have not and come off as a real asswipe because you don't know what you are talking about.

Dillon = troll that is not factual, knows no ee but corrects me with personal attacks. that's all he's good for.