Ive seen a bit of talk lately about TSM's. They have been referred to as rare and seem to conjure a lot of attention. So, I thought I'd open a discussion to educate myself as opposed to Google. What are your thoughts on the bike.....and what would you pay for one if you found it minty with a title?

I love the bike. The TSM and TSMR are a solid 1 on my favorite moped list. Still quite high on favorite bike list in general. What would I pay for one? Probably not much as I'm kinda poe... I don't really care about weather or not it's mint or not. Would love to have one. My second choice would be a TSA.

They look cool... Found one for sale today for 1k, not sure if they are worth that

> They look cool... Found one for sale today for 1k, not sure if they are

They are worth at least that. Probably closer to $1500 depending on your market.

I think in general theyre popular because

1) moped folks prefer classic style of older bikes to scooters, largely because theyre "cool". And considering cool, top tanks look like classic cool motorcycles. Add to that theyre slim and the vaguely UJM/cafe style is pretty popular, even the upswept "scrambler" style is very in vogue with moto fans. Cant deny it, TSMs do have really great style. It's distinctly more popular of a style than the earlier chunkier 60's style top tanks or the later motorcycle full-fairing jives. also top tank tomos are all so gross looking somehow.

2) Theyre rare amongst cool toptanks. I think a magnum or general really looks just as good, put side by side, and personally think a sachs G3 looks even better as far as classic-styled top tank mopeds go. But those are available, most people into mopeds for more than a few years have had one or many of those. There's definitely something to be coveted of the TSM's rarity, especially considering part of the community aspect is, intentionally or not, showing off your bike, and there's credibility for finding and maintaining a rare boy.

3) Performance. Puchs have great performance options, but they're single speed (or less reliably, 2 speed). Sachs and generals are single speed. But peugeot has huge tuning potential and it's variated. Plus it's got a more stable frame and swingarm vs stepthrough peugeot making it more desirable in that regard also. still the dumb swung swinging motor subframe setup tho... Moby didnt have a real 70's toptank option like the TSM, the dealers sold the Morini'd nonvariated sebring as a top tank offering

I think that's it. top level of styl,e rarity and performance in one package. There's a few others that fit that bill, Magnum LTD gets the rarity piece that regular mag's missed, and Derbi laguna, RD50 and C5 the same. But I'd say those are all pretty equally coveted.

Regarding value, I'd pay up to 800 for a nice one, but only with the intent to resell it. They are "cool" for the above reasons, making it a GREAT candidate to sell for a profit. I'm just as happy (happier really) riding dumb crappy cheap old shit that i don't feel guilty slowly trashing, and so to me a TSM would just be a nice opportunity to get someone new into mopeds with it's sexy allure, and maybe come out ahead financially too. 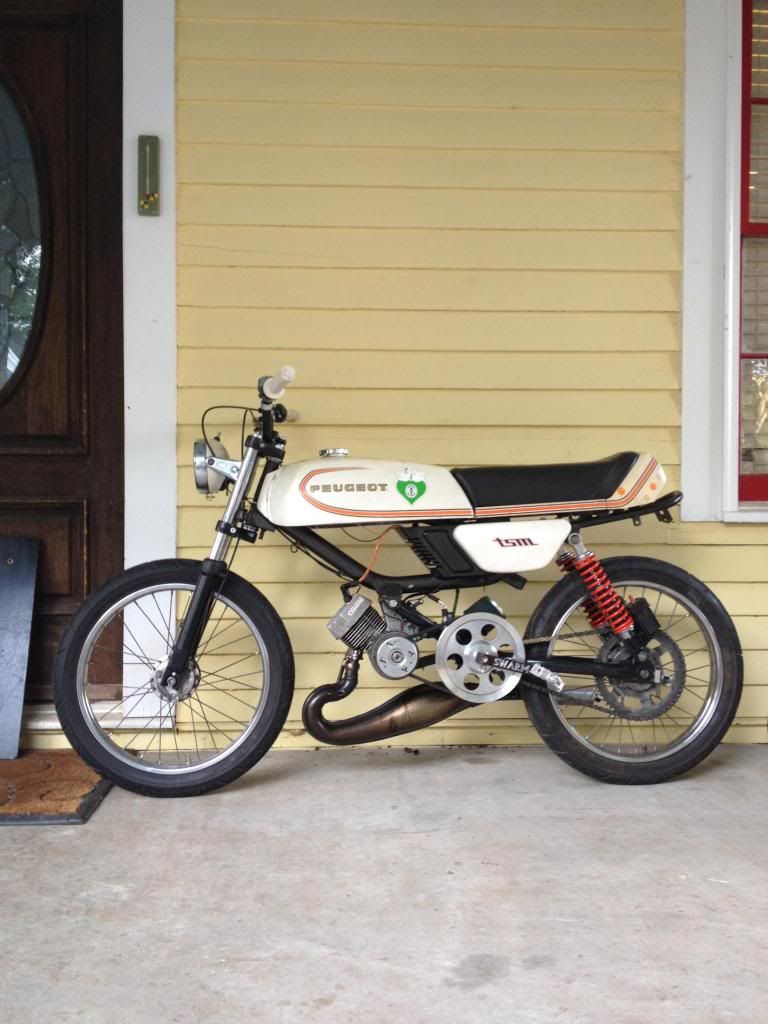 I have one, i paid $160 for it as a total basket case missing a lot of parts, rattle canned, etc.

its ok, i mean its definitely not as nice as a magnum or G3. For me the higher end magnums are kindof the gold standard for any moped with real hydro forks, beefy frame and swingarm, good motor, great looks and a nice big comfy seat.

its made much more flimsy, the forks are spindly little pogo sticks instead of real hydros like a General 5 star or up market Mag. Even the XK mags and G3's have nicer pogo sticks. The tsm forks are just 103 forks that are longer with the same travel and super flexy.

The stock motor is a little bit hotter than a basic 103, it has all the good parts and a special bigger finned cylinder, but just like anything Gurt McDurt you're gonna need to replace the reeds, intake, and carb with an SHA. You'll probably also end up putting a kit on it and variator if you wanna blast.

The seat is the worst, its super small and forces you into a somewhat uncomfortable seating position. I've tried to re-do the foam twice and can't get it

The tank is nice and big, its cool lookin. It feels good between your legs. I've never much liked the peugeot pedal position but the seat is up higher above the pedals and it actually has a pretty good layout for longer legged folks.

I dunno, they are cool and all but to be honest you could probably build a way better one from scratch using a donor 103 for about 400 bucks that would whoop all the ass. I've replaced the whole front end on mine with a TTR125 17" wheel with huge drum brakes, replaced rear shocks, replaced the whole engine, variator, bars, controls, recovered the seat.... pretty much the only original parts are the tank, seat, subframe and rear wheel at this point. Oh yeah the exhaust pipe rocks, i kept that and put on a mild 70cc kit.

If you want one for the sake of owning something lustworthy and rare, its pretty cool in that regard, but if you're just trying to build a fast reliable variated and kinda cool looking top tank you can definitely get there a lot cheaper top tanking a hobbit or doing something else. I'm not really a big top tank guy but my wife likes them so yah i guess, whatever.

They are have great lines. They are rare and desirable. Classic French styling.

I had one that was a project and when it was sold I still got 700 for it.

I consider them better to look at then to wrench/own or ride daily.

I would rather have a magnum.