Ok, I admit it, the Sears sabre wasn't right for me, I know it now. I'm not a shifty guy and I can own that.

I decided to trade it for a Moby.

It hauls my 240 lb carcass at 37mph gps with plenty left. I noticed that its lighter than the Tomos and the Puch i used to own. Dare I say "Flimsy". I do love the light weight, I can grab it and haul it around the garage with the center stand down with no issue.

its not without it's faults. The lights don't work. It has a cdi ignition and the previous owner tells me it needs a new lighting coil. the center stand is too far, but that's not the first bike i had with that problem. no side panels or tool box panels, though that's cosmetic.

I have to remember to tuck in my shoelaces or wear something slip on to avoid it getting wrapped in the variator, killing me or even worse, damaging the transmission.

is there a cover for the doppler clutchless thingy? just wondering.

by the way, they sears sabre worked perfectly for the guy and he put 22 miles on it last night. I couldn't get it into 1st gear without stalling. That proves it wasn't meant to be my bike.

I thought le Mopeds only came in black and gold with mags? Either way still a Cool ped. The light coils on the CDI ignitions will burn out. I'd replace it and hard wire the bike if it was mine. 37 ain't bad it it's a stock cylinder but if it's a kit you should be midish 40's

Wait? Was that a real brand? I was just being goofy because it's French. This is a plain old moby.

> Wait? Was that a real brand? I was just being goofy because it's French.

> This is a plain old moby.

Yes it is sir 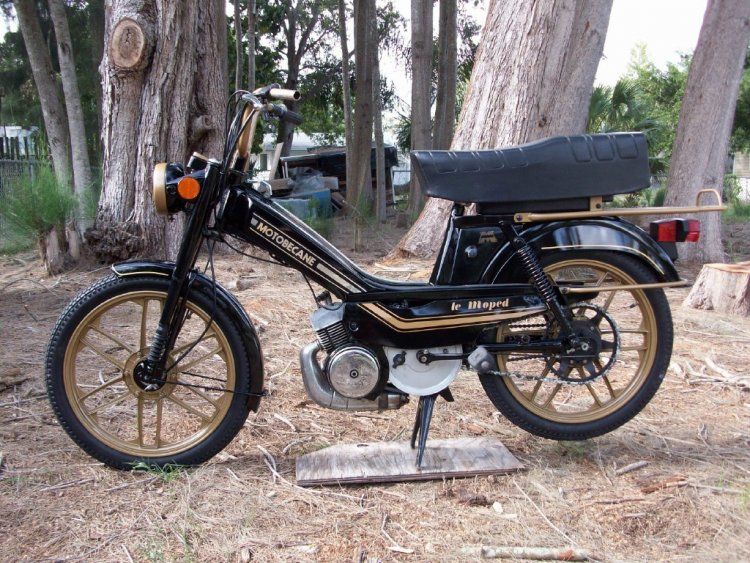 How bad was the Sabre that convinced you to go Moby???? (edited)

All the hard work was already done!

The sabre was decent. Just not thing.

I drank the French kool aid and it tastes like cheese and cigarettes!

Welcome to the world of frenchies...

> All the hard work was already done!

> The sabre was decent. Just not thing.

> I drank the French kool aid and it tastes like cheese and cigarettes!

It's got pretty much everything already. I couldnt resist the urge to mod while it was mine. Now the urge has started all over again to fully restore his badass sabre

Forsure, i think you got an awesome trade!

We both came out on top here. I got something badass and he got a nice moby to ride around on