So yesterday I was headed home and I was WOT heavy traffic and out of a side street a camaro cuts me off I tried to avoid and go around. But I hit the camaro in the rear drivers corner. My bike's totalled it looks like I went 12 rounds with Tyson. All bruises and sprains . seriously I rode the bike less than a month...

I hate the city impound its like 600 for the tow and one day storage. Freakin criminal

Be careful out there...

bikers get the shaft from cagers almost all of the damn time...

on her tablet unconcerned during the ambulance time...another lady showed up & took care will he was tangled between H-D & TOYOTA ...

I HOPE YOU HEAL FAST.

Did you get the perpetrator? And if so, i assume he has to pay for the impound lot?

I hope you have a speedy recovery!

glad u alive bro. i got hit 1 year ago last week.

Finally I got the a3 hybrid running like a raped ape.

Well just under 100 miles on the build. But for the very first time in 25 years the other guy had insurance

Well it seems like the third time's the charm I don't think I'm ever going to ride mopeds again today I realized the neurological damage is more than I ever thought it would be hey I can't play guitar anymore or keyboards I kind of probably suck at bass guitar I haven't even f****** tried something just f*** it happened I can't get in the zone anymore today I was just going over this Old Black Sabbath they're playing on College radio it's like that I've known this s*** inside and out for like 20 years and now I can't even f****** follow the f****** next f****** bar I feel really disgusted and then I'm dizzy all the time and I can't freaking drive a bike if I survive this s*** I got a whole bunch of f****** money coming my way from a previous f****** accident so I'll tell you both heads were great in 1977 before f****** cell phones and millennials and I'm f****** people that can't wait f****** 10 seconds because their beer is getting cold at home and they can't f****** wait to get there these freaking people with money and the fancy f****** cars have no respect for anybody but themselves they are totally self-centered and self-absorbed and just like the f****** Beatles said in their lives there's something lacking and what they need is a damn good whacking...

JBot you want the innards of synthbot I get a shipping quote. Just cover the shipping. Pm me...

Luv out to all

slew, i have experienced neurological damage first hand, and i have been reading your posts....

the deep dark fog that your are experiencing may go away...and i hope that it does...you are coherent. this is good. you will bounce back.

we, as human beings live in the moment by default...time man....i hope that you were able to source some good thc based relaxation after it was stolen from you..

Nope even with a iD# of 4023. Right after the cancer kids

Can't you sue the guy to get your tow and impound fees???

It's covered. I an busted up

I was hit head on 6 years ago. Broken ribs etc. I am 64 years old and prepping for upcoming rallies starting with Acadia and Brooklyn and more. Stay determined and you will be back I promise The power lies within and with the support of your friends. We are pulling for you to return to the lifestyle you love

I forgot to mention the front tire blowout 4 years ago that sent me over the bars into the ambulance and hand surgery Oh and the fucking rabbit that ran through my front wheel two years ago separating me from my DKW and into a telephone pole. 1 broken rib and a broken nose and right orbit. The rabbit fared far worse though

quote: `I hate the city impound its like 600 for the tow and one day storage. Freakin criminal'

So true.legalized robbery. Holding your stuff hostage legally. No consideration for anyone.

3 times in one year?

Iv been really lucky and almost have been hit numerous times. On a narrow country road There was two cops cars on both side of the road & One of the cops Turn his wheel into the road to see if I would bump/hit his wheel and fall over ( a did a perfect u turn as he was turning the wheel and I turned around and gave The Cop in the other car the biggest stink face. Wish I had my go pro that day!

I once went to Columbus impound lot to get my boy's personal stuff. They refused to give it unless paid 100 bucks just to get in the glove compartment.

2 er's and a trauma center missed it.

I was thrown from my moped and landed on my face. Here is my helmet.

I am curious to see the damage to your helmet White Dog. 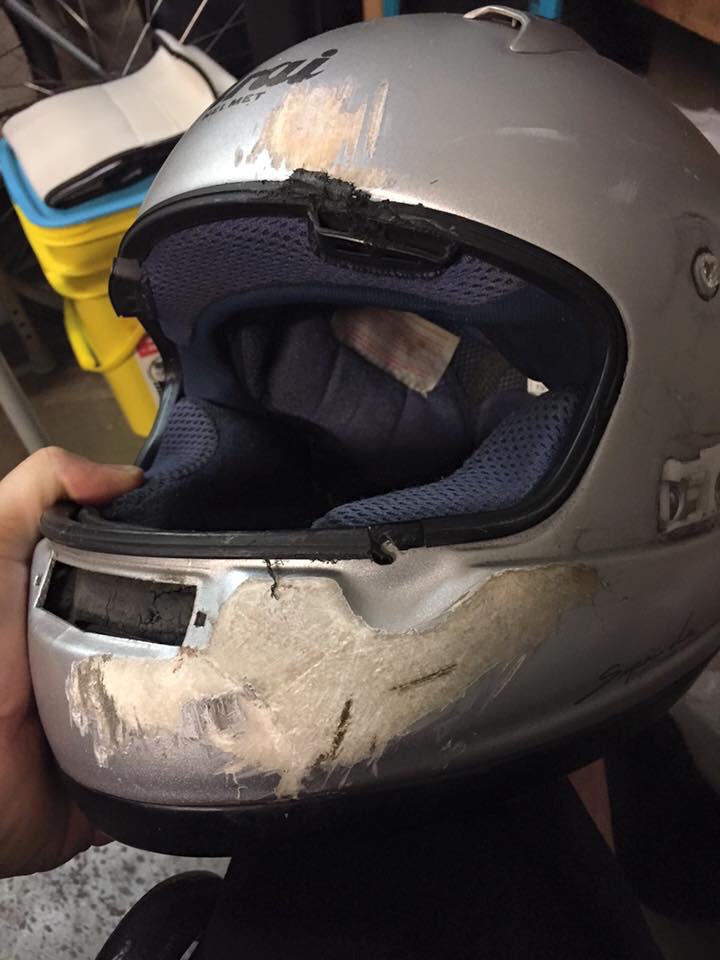 This is my Helmut. My vision is like 30 3 hundred so I rarely wear any helmet that restricts my vision I usually have a half shell but I was such a nice day I wasn't wearing it my mistake but on the other side of it if I was wearing it it's still would have hit me like that without a full face. On the plus side I did a full on shoulder block Annie block on the car unfortunately I was going so fast I spun around and was flipped a whole bunch of times I protected my good eye and it's kind of useless I fell after hitting the car I flipped up in the air and just landed hard on the ground face first of course sort of like that one t-shirt for the Moped Army BBQ I think it was 2008 or there's just like the skid mark and the guy on his face in the shoulder it was a lot like that

Well my pain is still out of control Pennsylvania has policy on medical marijuana and use in the hospital is unbending I have filed complaints and I have a Philadelphia malpractice attorney I also have a Philadelphia personal injury attorney it is getting so thick I don't even know how the hell I am going to deal with the chronic pain issues when the insurance company won't cover my medical marijuana and it's the only pain management option I have so my idea is tomorrow morning I am going to go to the bank and get my bank account numbers and a certified check and I'm going to write it out to the dispensary with a blank date also a blank amount and I'm going to write in the memo car accident case number incident number my insurers information and I'm going to talk to the owner of the dispensary and see if I can give him this in lieu of payment until everything's settled...

impound lots don't care at all about receipts and shit. just as long as you pay them - theyre an extortion arm of the "law" and just out to cash in on people's vehicle misfortunes. sorry man,everything about this makes me kinda mad, incompetent drivers to incompetent law enforcement