So I really want to build an electric Maxi cause I've always wanted to dip my feet in that realm. Have any of you out there converted a ped to electric? I have a plan to dev/fab my own frame and build from there. I know ranges are still primitive but that torque is so nice. :)

Also I have been studying this article on the subject matter

in a project that i would entertain would have to have 3 elements.

you need the same tire size ft & back.

this build would probably weight around 185lbs

I'd use a motobecane 50v frame, its a lot lighter (remove rear fender), the tank has a support inside it for more stability if you cut it open and put batteries inside (still weld a frame brace though) , I think the swingarm would be better than a puchs for a hub motor (or better yet use a pug 103's swingarm), and it has the triangle toolbox space for a controller and whatnot.

What about a 40T frame? Dont they weigh like 90lbs all together?

the cops would'nt looking it's way...

it would be a great bug-out ride...

Darrel is going to use it on ''the strolling life challenged''....NO REALLY.LOL

Would be pretty interesting to do a maxi/moped equivalent of what shanghai customs is doing for the cub:

Essentially if you have a maxi (or other ubiquitous moped) frame, they sell you a kit to make it electric. Very $$$ tho. 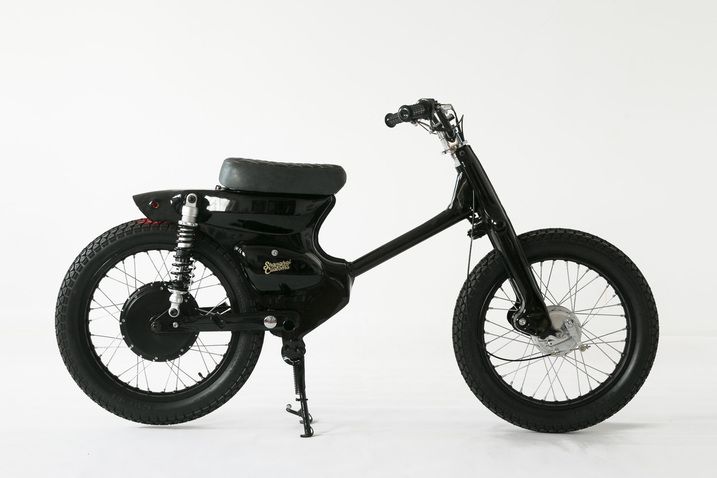 Will D already proved that the idea sucks. But if your set on having a learning experience then its justifiable. I'd ride the shit out of an electric Crf though.

What is this and is it worth $75? Has pedals and motor but not one marking.

^I'd put an engine on it. Vespa would prolly fit nice.

it wasn't very useful, or it would have been ridin' the rust off the forks a little bit...the bush behind it makes the rust bucket stand out nice...lol.

Puch actually made an electric concept apparently, back in the day.

I feel like I was just talking about this in another thread like Friday. I thought this was it.

Those cub conversions are cool, bt holy shit only 1kW and cost as much as a new complete build, ouch. but very sexy option. still - you could DIY that with better specs at the same cost or less.

that puch you linked I kinda hate the style but some good info in that write up. building your own battery saves a lotta money but it also takes some stuff most folks don't have access too, which cuts your savings right away. namely the spot welder and a battery capacity tester. The battery and circuit design is pretty great in that tutorial too, though the soldered copper wire on top of the nickel I doubt is worth it and I worry about it poking holes... also 81V at 85A is fucking bonkers, especially into a hub motor. That's gonna roach the controller and motor right quick but it's still cool as hell.

here's mine: I did it cheap and shitty, it was a spare frame and more of a proof of concept type build. it'd be easily done better but you start spending lots on batteries especially. Also big take-away, get reputable batteries. Even Samsung's from ebay they'll slip in shitty clones, no way to know without testing each individual capacity.

there's a guy on u-boob that electrifies a ct90.

Yea I just saw a pair of electric S90s the other day too. and no I don't mean the whacky "Capital Z" shaped concept thing...

it was nice and I see the appeal but shit, fuckers are not cheap

check out this thread from 2009